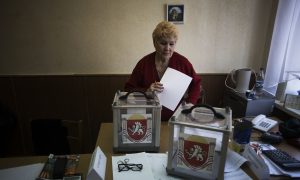 Crimea an Armed Camp as Tensions Rise Ahead of Referendum
0 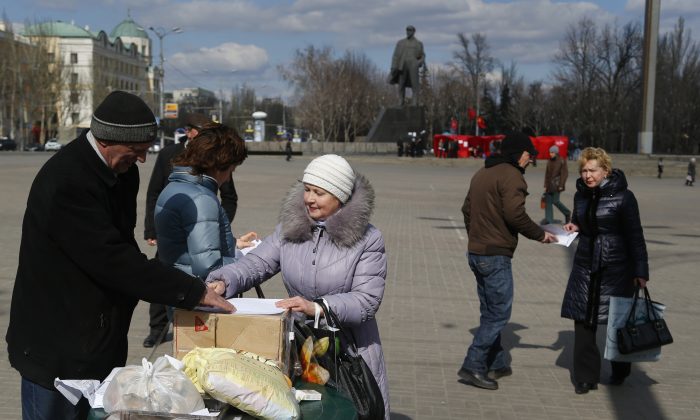 Pro Russia activists gather signatures for a referendum on secession for the Donetsk region at a central square in Donetsk, eastern Ukraine, Wednesday, March 12, 2014. The Group of 7 world leaders said in a statement released from the White House on Wednesday that they won't recognize results of a referendum for the Crimea region to split from Ukraine and join Russia. (AP Photo/Sergei Grits)
Crisis in Ukraine

What We’ll Learn From Crimea’s Vote

The March 16 referendum on whether Crimea should become part of Russia, or remain Ukrainian, won’t reveal any big truths beyond Russian President Vladimir Putin’s preference.  Sunday’s vote will not be free and fair, and any result can easily be manipulated by Russia. Most likely, the “results” will show that the population is eager to join the Russian Federation. And then the situation in Crimea will slide into a political and legal limbo. Politics will trump Ukrainian and international law. But all hopes of a democratic – or at least more democratic – solution aren’t lost. It just may not be the solution we Westerners are looking for.

To understand what’s likely to happen after Sunday, we first must understand the demographics of Crimea. That’s not easy – and defies the neat labeling of Census numbers. Take one population group,  the Crimean Tatars, for example. They’re a small but underappreciated element in Crimean society,  constituting around 12 percent of the regional population and representing a more mobilized political force than the region’s ethnic Russians (58 percent in 2001) and largely Russophone Ukrainians (24 percent in 2001).

A big reason that they act in unison is because of their painful shared history: They recall deportation under Stalin, the return to Crimea from the late Gorbachev period onwards, and a struggle for political and social integration into Crimea and Ukraine. They hold Moscow responsible for the Soviet-era deportation. Therefore, it will be hard for Russia to buy off Crimean Tatar grievances, although various representatives of the Russian Federation are already busy offering the Crimean Tatars money and political representation at the regional level.

A vote on joining Russia will put Crimean Tatar unity to a test, although a crisis might reinforce the internal cohesion of a group that today combines different socio-economic interests and contrasting ideas on how to best safeguard their rights. If the Crimean Tatars do form a unified opposition, Putin may negotiate: He can’t have an interest in destabilizing the region and tackling a Crimean Tatar insurgency. He stands to gain more from using Crimea’s ambiguous status as a bargaining chip in relations with Ukraine.

But back to the demographics – and what they can, and can’t, tell us about the upcoming vote. The problem is that the most recent Ukrainian Census data is from 2001, and it asked about things like ‘nationality’ and ‘native language.’  But ethnicity and language do not clearly predict preferences on Crimea’s relationship with Russia. A widespread pro-Russian cultural sentiment should not be equated automatically with active support for Putin’s Russia and its political system. Many Ukrainians, including citizens based in Crimea, value the more democratic transition path Ukraine took after the collapse of the Soviet Union. There are also generational differences: the younger generation appears to be more at ease with the notion of Crimea being part of the Ukrainian state. Opinion polls show, too, that Crimeans more generally  value a separate Crimean regional identity. This idea does not translate neatly into views on joining Russia.

So, what’s the best-case scenario? The best Western powers can hope for is to entice Russia to take part in a longer process of negotiations over Crimea’s status without prejudging the outcome. We learned the lesson of conflict prevention in Crimea in the 1990s. The key is the process of institution-making (towards a national and regional constitution that enshrined the concept of Crimean autonomy). We shouldn’t try impose a fixed institutional design.  Devising a staged, open-ended process that includes choices along the way, including a more far-reaching autonomy and secession from Ukraine, may not be what Western leaders want, but it may well be the only route to manage the post-referendum situation.

The Ukrainian state depends on balancing different regional interests. So far the balancing mechanism has been an informal one. The current crisis could pave the way towards a more formal federalization, with redefined institutions to help foster relations between the center and the regions.  Ironically, this might be Ukraine’s best chance to build a stronger state internally and avoid future Russian overtures. The status of Crimea, by comparison, is wide open, and all sides should keep it like this for the foreseeable future if they want to avoid regional instability and the creation of political facts on the ground that are hard to undo later.

Gwendolyn Sasse is a Professorial Fellow at Nuffield College, University of Oxford. She is the author of “The Crimea Question: Identity, Transition, and Conflict,” Harvard University Press, 2007.

This article was originally published in The Weekly Wonk, New America‘s digital magazine. Read the original.