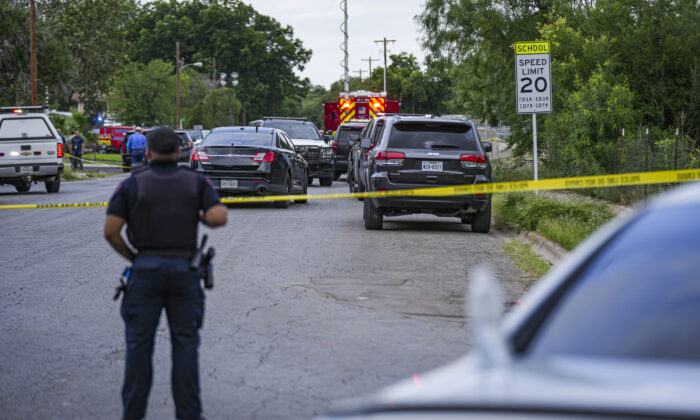 Police cordon off the streets around Robb Elementary School after a mass shooting, in Uvalde, Texas, on May 24, 2022. (Charlotte Cuthbertson/The Epoch Times)
Viewpoints

What We Miss When Boys Shoot Children

When a tragedy involving the shooting of kids occurs, pundits race to their podiums bleating, “How could this ever happen? Guns should be outlawed; teachers should carry concealed weapons; and mental health care needs more money.”

The list of “what we need to do’s” goes on and on.

I get it. These make sense and are clean talking points, but they miss something. They give neither understanding of the shooter’s behavior nor any viable solution. But the biggest elephant in the room always remains avoided. Our teens and young adult boys are in trouble—big trouble. And every one of us bears the pain of their trouble. If we simply look objectively at the life of a teen boy in America, it doesn’t take an astute mind to see what’s going on.

There isn’t one singular problem leading boys to such a dark place; there are many.

The typical teen male in the United States looks at a screen at least eight hours per day. Sure, they do their schoolwork, but still, thousands of hours are spent playing violent games where aggressors kill, maim, and rape women. They watch movies with wanton shooting, cutting, and bludgeoning that’s even more lifelike than video games. The “better” the producers, the more realistic the violence appears. Year after year, their minds soak in toxic messages that permeate their souls. Some (though few) scholars say that seeing violence makes no difference to the heart of a boy, but who are we fooling? Of course watching hundreds of hours of realistic violence desensitizes boys to harming others.

We know that 50 percent of those boys live away from their dads for at least 50 percent of the time. Without their dads at home, research shows that boys are at higher risk of taking drugs and alcohol; having significant anxiety and depression; experiencing poor school performance, and the list goes on. The bottom line is this: Less time with dad makes a boy more fragile and vulnerable to really bad behaviors.

Still, another dimension of his life has been eviscerated. He’s told that God isn’t only a ridiculous confabulation, but also one for simple-minded, narrow-thinking people. What he’s left with is a vacuum in his heart and soul that prevents him from being centered, knowing right from wrong, and understanding that in God’s eyes, every human has inestimable value.

When he goes to school, he isn’t told to read the great classics in literature, challenge himself to learn another language, or embrace his masculinity. Maleness is bad, and challenging his intellect is a waste of time (or at least no fun). Everything is up for grabs. He’s invited to question every aspect of his life—his beliefs, feelings, perspective, identity, sexual identity, and orientation—and coerced into defining himself in many ways that he’s wholly incapable of doing.

In sum, we are raising boys who are trained to be violent, who have far too little influence from and time with their fathers, and learn that God is a ruse and that he can declare himself to be anything—male or female—that he wants to be. And in all of this, he will receive support from adults everywhere. He can’t declare that there’s truth or right and wrong. If he embraces any goodness from being masculine, he’s bad to the core. In short, his mind and heart are convulsing from confusion.

We can talk about guns, public policy, and mental health programs. These conversations are good. Schools need help, and every one of us knows this. But the time for us to face the painful realities of what we’re doing to our boys is long overdue. We must stop it. Boys need men, books instead of screens, values that teach them what’s right and what’s wrong, and clear messages that living as a male is a good thing. And when they’re taught that praying to God will grow them into strong men, they will never imagine walking into schools or grocery stores and shooting children.