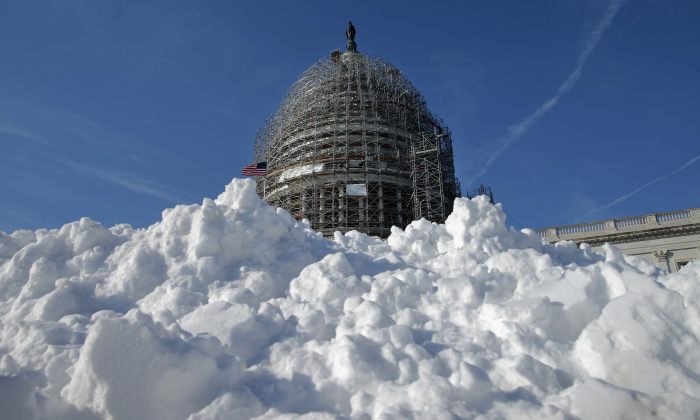 WASHINGTON, DC - JANUARY 21: A pile of shoveled snow stands in the plaza on the east side of the U.S. Capitol January 21, 2016 in Washington, DC. One inch of snowfall delayed school openings in the greater Washington, DC, area on Thursday as people along the Easter Seaboard prepare for a blizzard to arrive within the next 24 hours. (Photo by Chip Somodevilla/Getty Images)
US

What We Know: Key Takeaways on ‘Potentially Crippling’ Storm

As people across the eastern United States prepare for this weekend’s winter storm, here’s what we know:

“A potentially crippling winter storm,” according to the National Weather Service, which forecasts heavy snow and high winds across the northern mid-Atlantic region, including Baltimore, Washington, Philadelphia and New York City.

Blizzard watches have been issued from Arkansas through Virginia and up the East Coast. That means potentially life-threatening conditions, with winds reaching up to 50 mph and heavy snow reducing visibility to zero. Power outages and coastal flooding are expected. Already, several people have died in accidents on icy roads.

The heaviest amounts, up to 2 feet, are forecast for areas west and southwest of the Washington area. The capital could get 15-20 inches, Philadelphia could see 12 to 18 and New York City and Long Island could get 8 to 10. Winds could reach 50 mph, reducing visibility to zero and causing power outages and coastal flooding.

The storm has already brought freezing rain, ice and snow to Arkansas, Tennessee and Kentucky. The heavy snow should begin falling Friday afternoon in Washington, and keep falling into Sunday as it moves up the coast.

Many have doubts after a light dusting caused commuter chaos Wednesday night, prompting the mayor to apologize for a weak response.

Airlines have begun canceling flights into @BWI_Airport ahead of the coming winter storm https://t.co/A9eEJ31X9s pic.twitter.com/Hlr8C2b7QH