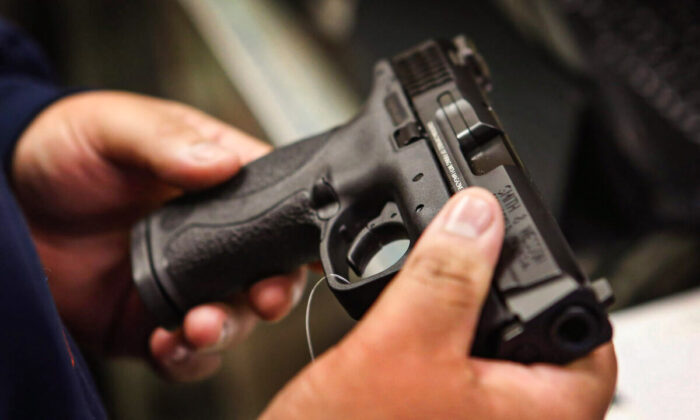 A customer shops for a pistol in Tinley Park, Illinois, on Dec. 17, 2012. (Scott Olson/Getty Images)
Crime and Incidents

Authorities revealed that the 22-year-old Indiana man who stopped a mass shooting at an Indiana mall over the weekend is Elisjsha Dicken.

What Happened in the Incident

Dicken was accompanying his girlfriend at the Greenwood Park Mall, located 15 miles south of Indianapolis, when a shooter opened fire after emerging from the mall bathroom, Greenwood Police Chief Jim Ison said.

“I will say his actions were nothing short of heroic,” Ison said of Dicken.

Dicken then “engaged the [shooter] from quite a distance with a handgun, was very proficient in that, very tactically sound, and as he moved to close in on the suspect he was also motioning for people to exit behind him,” Ison explained during a news conference.

Authorities in the news conference said Sapirman’s motive is unknown. Before he opened fire, Sapirman spent more than one hour in the mall bathroom, Ison said.

He had purchased three weapons and brought them to the mall, Ison said, but he only used a Sig Sauer M400 rifle.

Indiana attorney Guy Relford, who is representing Dicken, said that his client followed the law.

Relford issued a statement saying he’s “a true American hero who saved countless lives during a horrific event that could have been so much worse if not for Eli’s courage, preparedness and willingness to protect others.”

“Because we want to respect the on-going criminal investigation by the Greenwood Police Department and take time to honor the three innocent lives lost, we won’t be making any substantive comments on Sunday’s events until after the authorities’ investigation is closed,” Dicken’s lawyer added.

As of July 1 in Indiana, state law no longer required individuals to have a permit to carry a firearm. Officials said Dicken was armed with a 9mm handgun.

Dicken was not technically allowed to carry a gun inside the mall as the Greenwood Park Mall’s website says it has a no-gun policy.

However, the rule “certainly has no effect whatsoever on his ability to use force to defend himself or to defend the other people in the mall,” Relford told the Indianapolis Star. He said that if Dicken carried the firearm into the mall and was told to leave and he doesn’t, he could be charged with trespassing.

Dicken was praised by local officials for his actions.

“I’m grateful a good guy with a gun was there to prevent further casualties and am praying for the families who lost loved ones in this senseless tragedy,” Rep. Jim Banks (R-Ind.) wrote on Twitter Sunday night.

“Our city, our community and our state is grateful for his heroism in this situation,” Greenwood Mayor Mark Myers said. “He’s a young man processing a lot. I ask that you give him space and time to be able to process what he’s gone through last night.”

“I am 100 percent certain many, many more people would’ve died last night if it was not for his heroism,” Ison told ABC News. “The young man had his wits about him, acted very quickly.”