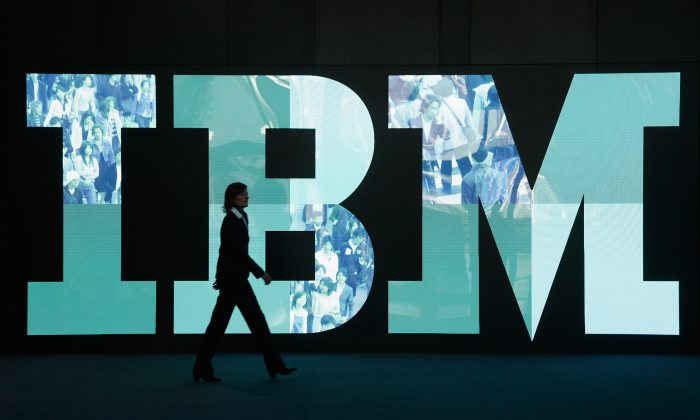 A woman walks past the IBM logo at the CeBIT technology trade fair in Hanover, Germany, on Feb. 28, 2011. (Sean Gallup/Getty Images)
Business & Economy

With Wal-Mart sales and profits falling, pundits are asking if the U.S. economy is again headed down. Hardly.

Like IBM and other business icons in trouble, the Arkansas retailer is simply being squeezed by better competitors—mainly Americans—heralding a new age of American innovation. This is the new American century.

Look at Wal-Mart—its recipe for success was simple. Through a detailed knowledge of supplier costs, disciplined supply chain management, and low wages for store personnel the retail bargained hard with manufacturers and delivered goods at the lowest prices.

Unfortunately, its methods were hardly occult and others, including Dollar General and Target caught on, undermining the Arkansas behemoth’s competitive edge. In addition, other big employers such as McDonald’s has put Wal-Mart under increasing political pressure to pay its workers more.

Wal-Mart attributes 75 percent of its drop in projected earnings to raising entry-level wages to $9 an hour, but employers don’t get much paying a single mom so little. Shoppers complain its stores are unfriendly, messy, and often poorly stocked. Other bargain retailers are suffering a similar malaise because millennials and older folks willing to change buying habits can get better products, cheaper online.

Meanwhile, for $99 a year, Amazon’s Prime provides prime-time TV and free shipping directly from the folks that make products. That virtual marketplace offers more choice, competition that drives down prices, and cuts out altogether the retail supply chain, the shipping to warehouses and stores and retailers inventory carrying costs. That drives consumer prices to their lowest possible level.

Brick-and-mortar retail is not going away. But when consumers know exactly what they want they can save even more money by avoiding Wal-Mart’s congested parking lots and “courteous” employees.

Many similar, seismic changes are occurring at IBM.

The tech giant’s competitive advantage was in helping moderate-sized and large companies manage on-site computing, software, and related services—and then using the resulting access to hawk its mainframes, software, and businesses services, such as Lotus Notes email and artificial intelligence systems.

Unfortunately for IBM and rivals Hewlett-Packard, Dell, and Oracle, businesses large and small can rent or lease computer services more cheaply on “the cloud.” Amazon Web Services leads by offering 10 times the cloud computing capacity as the next 14 largest rivals combined, and boasts clients including General Electric, BMW, and Capital One.

Amazon is building a marketplace for software and services from a wide range of suppliers, with obvious advantages over an IBM consultant who has an interest in hawking Big Blue’s offerings. Many other firms including Juniper Networks, Equinix, and Red Hat are also offering computing power, software, and other services on the Web.

Both Wal-Mart and IBM are moving what they do to the Web and cloud but both have CEOs who are more comfortable with another age and executives who feel receive compensation their revenue and earnings trends indicate they hardly deserve.

The good news is that so many of the leaders in e-commerce and the infrastructures of data management, computing, software, and business services that define the cloud, are American.

The story repeats in so many places. Tesla—not BMW or Toyota—offers electric cars that break performance meters. Twitter and Facebook turn all of humanity into a village square.

We entered the 21st century being told by so many economists and pundits this would be the “Asian Century.” China’s woes and inept leadership throw cold water on that thinking.

We entered the 21st century being told by so many economists and pundits this would be the “Asian Century.” China’s woes and inept leadership throw cold water on that thinking.

Just as in Henry Ford’s age, the future belongs to people with a “better idea.” Thankfully, many of those are the American entrepreneurs who are defining this new American century.