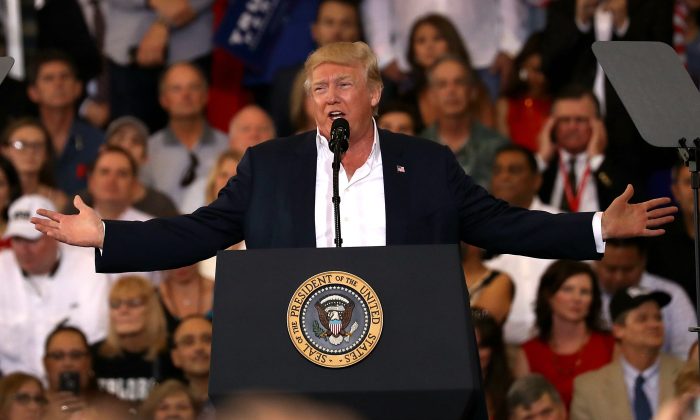 President Donald Trump speaks during a campaign rally at the AeroMod International hangar at Orlando Melbourne International Airport in Melbourne, Florida on Feb. 18, 2017. President Trump is holding his rally as he continues to try to push his agenda through in Washington, DC. (Joe Raedle/Getty Images)
Politics

Comments made by President Donald Trump at a Feb. 18 rally in Melbourne, Florida, that talked about problems in Sweden, were based on a story broadcast on Fox News, the president said.

The segment, broadcast on Fox News’ “Tucker Carlson Tonight” on Feb. 17, showcased a documentary about an increase in gun violence and rape in Sweden in recent years. The documentary links the increased levels of crime to an influx of immigrants.

Trump did not elaborate on the details of what he was alluding to regarding Sweden.

Following the rally, media organizations tried to find out if Sweden had had a recent terrorist attack.

“Nothing particularly nefarious happened in Sweden on Friday—or Saturday, for that matter—and Swedes were left baffled,” the New York Times reported.

The Washington Post wrote “if you believe President Trump, something happened Friday night in Sweden that deserved the attention of the world. However, nobody knows what that might be, least of all the Swedes.”

The Guardian ran the headline, “‘Sweden, who would believe this?’: Trump cites non-existent terror attack.”

Following the media whirlwind regarding the comment, the Swedish embassy asked the U.S. State Department for an explanation as to whether there had been an incident in Sweden on Friday, Reuters reported.

Despite the wide range of topics discussed at the rally, Trump’s comment about Sweden dominated news coverage.

“My statement as to what’s happening in Sweden was in reference to a story that was broadcast on @FoxNews concerning immigrants & Sweden.” Trump tweeted on Feb. 19.

My statement as to what’s happening in Sweden was in reference to a story that was broadcast on @FoxNews concerning immigrants & Sweden.

Furor Over Immigration Arrests Not Supported by Numbers

According to the right-leaning Gatestone Institute, Sweden has become the “rape capital of Europe” and currently is only surpassed in the world by South Africa.

According to figures published by The Swedish National Council for Crime Prevention, 29,000 Swedish women in 2011 reported that they had been raped.

Another study by The Swedish National Council for Crime Prevention showed the number of gang rapes quadrupled between 1995 and 2006. No further studies have been undertaken since.

Since 2000, there has been only one research report conducted on immigrant crime in Sweden, in 2006, by Ann-Christine Hjelm from Karlstads University. The report showed that in 2002, 85 percent of criminals sentenced to at least two years in prison for rape in Svea Hovrätt, a court of appeals, were foreign born or second-generation immigrants.

A 1996 report conducted by the Swedish National Council for Crime Prevention concluded that immigrants from North Africa were 23 times as likely to commit rape as Swedish men.

The lack of updated studies from 2006 makes it difficult to assess the current situation, though some media have reference the 2016 Swedish Crime Survey, which takes the opinions of 15,000 respondents on their perception of crime rates. That survey has stayed relatively steady since 2006.