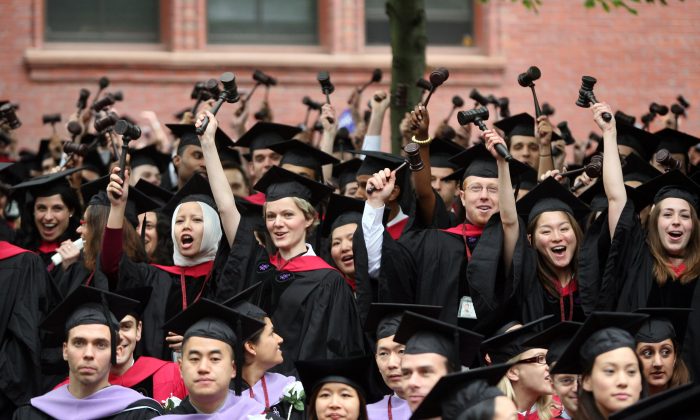 What to Do About the Student Loan Problem

The student loan problem has become a fiasco. The magnitude of the problem is startling—more than $1.5 trillion of outstanding debt (triple what it was a mere 13 years ago).

Currently, about a quarter of those supposed to be repaying their loans are in arrears or default. More than 1 million borrowers are joining their ranks each year, and current projections are that 40 percent of student loans will be in default by 2023.

One cause of the accelerating default rate is presidential politics.

Presidential hopefuls such as Sen. Elizabeth Warren (D-Mass.) are energetically trolling for the votes of millions of Americans with college loan debts by proposing to cancel those debts. (I wonder how the party of “social justice” will convince the millions of Americans who have paid off every last dime of their own college loans that canceling student loans is fair.)

In response to the political pandering, tens of thousands or hundreds of thousands of indebted graduates have stopped repaying their loans. Who can blame them for figuring that all they have to do is wait until a Democratic president is elected and their debt burdens will be lessened, if not eliminated?

As part of her efforts to help college loan debtors avoid repaying their loans, Warren (along with a small bipartisan group of senators) has floated an idea that could be part of an eventual solution to the college debt problem: “risk-sharing.”

Risk-sharing means that colleges and universities should have to repay a share of a student’s debt if that student’s degree doesn’t result in employment in his or her field of study.

For years, U.S. colleges have been awarding far more degrees in various subjects than there are job opportunities in those fields. It’s a little like selling 80,000 tickets to an event that has room for only 50,000 people. In a legal sense, it isn’t fraud as long as colleges don’t explicitly promise that their degrees will result in a job. Nonetheless, we can’t blame graduates for feeling cheated. For years, they listened to the general mantra, “You need a college degree to get a good job,” only to find themselves holding a degree that is worthless in the job market, and drowning in debt.

If Uncle Sam would get out of the way, risk-sharing might work like this: College-related debt wouldn’t be exempt from bankruptcy laws. Currently, bankruptcy law unfairly allows a 50-something businessman with 30 years of experience to wipe out his debts if his business fails, whereas inexperienced 20-somethings can’t (with rare exceptions) cancel college debts by declaring bankruptcy.

If bankruptcy relief were an option for college debt, lending institutions would exercise far more caution before issuing loans. They could seek to negotiate risk-sharing agreements with whatever colleges loan applicants want to attend, requiring that the college share the lender’s risk that graduates will default on loans because their degree doesn’t lead to a job.

How much risk a college should bear would be complicated and difficult to calculate.

There will never be a perfect match between the number of, say, history degrees and the number of jobs that require a history degree. In fact, there should be more degrees issued than the number of jobs available for a variety of reasons: Some history majors will go to law school where it doesn’t matter what a student’s undergraduate major was; others may simply prefer to go into a different line of work or join the family business or start a family.

And there needs to be an allowance for the fact that some degree-holders won’t be hired, due to personal factors such as lack of social skills. In none of those cases should colleges be on the hook for student loans.

At the same time, though, risk-sharing would discourage such travesties as a revenue-starved college allowing a student to roll up more than $125,000 for a Bachelor of Arts degree in theater, when knowing full well how few of that college’s theater grads ever get a job in theater. This actually happened to a friend of ours. (Factoid: Only 10 percent of degree-holders find employment in the fine arts.)

With risk-sharing, whereby the college would be responsible for repaying, say, one-third of her loans, the college, as a matter of financial risk management, would have quit accepting her borrowed money long before her debt approached six figures.

Unfortunately, the odds of Uncle Sam exiting the college loan market are between slim and none. On the contrary, Warren seeks to double down on federal involvement in higher education. Ready to impose yet another body blow to the long-suffering American taxpayer, Warren wants to make college attendance free.

While running for president in 2016, Hillary Clinton unveiled a “New College Compact” designed to “make college affordable and available to every American,” but even she didn’t go so far as to propose free college for all.

While “free college” may sound enticing, in practice, it would still be costly for college students, but in a different way. Currently, according to the Federal Reserve Bank of New York, each dollar that colleges have received via taxpayer-subsidized loans has resulted in a 60-cent increase in tuition. In other words, federal intervention has made college more expensive, resulting in a need for ever-larger loans.

“Free” college would increase the number of college students. What a terrible idea! To return to the analogy of selling 80,000 tickets to an event where the venue only holds 50,000 spectators, why on earth would anyone want to increase the number of tickets issued to 100,000 or more? Even if college tuition were free, many students would still end up bitter or frustrated about having spent several years of their lives obtaining a degree that doesn’t procure a job.

Warren et al. would channel trillions more taxpayer dollars toward the production of a good—a college diploma—for which there already is insufficient market demand. Welcome to the economically irrational world of socialism (aka central economic planning) in which government consumes the people’s wealth to make an existing problem worse.

Take note, people: The wasteful use of resources in the name of a supposedly worthy goal is the inherent flaw and folly of socialism. Free markets would reduce the current wasteful overinvestment in higher education while bringing the supply of and demand for specific degrees into a more economically rational balance. Big Government “solutions” would exacerbate the economic waste and knock supply and demand further out of balance. Is that what you want?

We need to reduce rather than increase Uncle Sam’s role in higher education. The progressives’ Santa Claus proposals for addressing the college debt problem are fool’s gold.