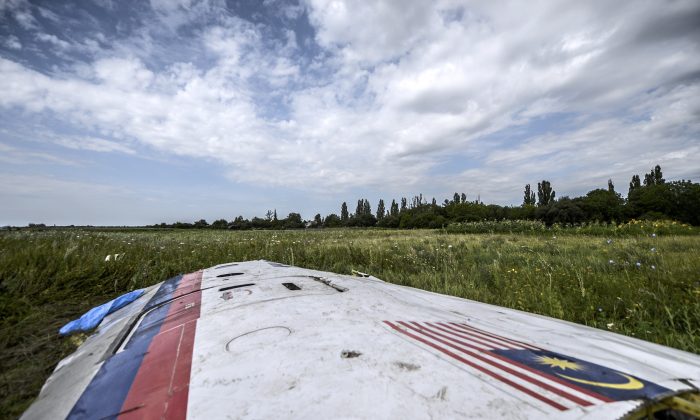 World War 3 fears have emerged in the aftermath of the crashing of Malaysia Airlines Flight 17 in Ukraine. (BULENT KILIC/AFP/Getty Images)
Europe

Much has been made of the possibility that the loss of Malaysia Airlines flight 17 was the work of an anti-aircraft missile. Even without confirmation or corroboration, investigators will have a wealth of evidence from the crash site and images from the scene to piece together the aeroplane’s last moments.

For the moment, there must remain doubt. The US has indicated that it has satellite and signals intelligence that a Russian-made BUK-M/SA-11 surface-to-air missile was launched from separatist-held areas of the Eastern Ukraine. Russia, in turn, has claimed that they have radar tapes of a Ukrainian Air Force SU-25 flying near MH17 just before radar contact was lost.

Given the paucity of hard evidence and the amount of noise generated how will we attempt to determine the actual physical cause of the crash and ultimately who might be responsible for it? Will it be the “black boxes“, physical wreckage, the human remains or some combination?

Analysing the Damage: Was It a Missile?

Normally in aircraft accident investigation the first thing investigators try to establish is the original source of the accident. Is it a mechanical malfunction, flight crew error, or some external event? Further, if the cause is external, the question is whether it was accidental or something more malicious. In the case of MH17 none of this has yet been established. However, the signs are pointing more and more to an external event. What this external event was can be determined by the damage present on the aircraft wreckage.

Until the investigators get access to the actual wreckage and attempt to reconstruct the aircraft we cannot know for sure that the damage came from outside; however, the indications from numerous photographs of portions of MH17’s fuselage and wings indicate that the initial damage was, most probably, external. We know this because of the shape of the holes.

In addition to an anti-aircraft missile there are several other possible causes that could produce this type of damage. One possible external cause would be a catastrophic failure of one of the two engines. While this type of event is quite rare it does happen occasionally, for instance United Airlines 232 and Delta Air Lines 1288. Catastrophic engine failures have caused several crashes; however, this was often from a failure of the flight control system, not the catastrophic in-flight breakup seen on MH17.

To help determine if the damage originated from an engine failure or an explosive device it is necessary to look at the location, size and shape of all of the fragmentation/shrapnel damage sustained by the aircraft. In the case of almost all of the engine failures the shrapnel damage is in line with and behind the location of the engine. For MH17, a significant amount of shrapnel damage occurred on the forward fuselage, as far forward as the cockpit. This type of damage pattern is highly unlikely as high-energy engine parts move radially outwards at extremely high speeds. Further, because of the nature of catastrophic engine failures, the shrapnel damage tends to be highly irregular in shape. Missile warheads would produce a very different damage pattern.

Modern anti-aircraft missiles use what are known as proximity high-explosive fragmentation warheads. These are designed to detonate near the aircraft, maximising the likelihood of catastrophic damage. Like engine failures these warheads, send their fragments out radially. However, because the warhead is located further away from the aircraft and the missile is moving at a different speed and in a different direction from the aircraft, the impact pattern will be substantially different from that of an engine failure.

If It Was a Missile, What Type?

Given the competing theories as to who might have shot a missile at MH17 it is important to attempt to determine the type of missile, if any, that was used. By looking at the relative concentration of fragment damage on different parts of the aircraft, and the presence of scorching it is possible to determine approximately where the missile was when the warhead detonated. Further, based on the total amount of damage, investigators will be able to determine the minimum size a warhead would need to be.

This information will be very useful in discriminating between a small 50kg air-to-air missile and a much larger surface to air missile. Further, different missiles use slightly different kinds of fragmentation warheads with different explosives. By looking at the size and shape of the shrapnel holes it will be possible to narrow down the specific warhead that was used and even who manufactured it.

Unfortunately, even with all this information, if it turns out MH17 was downed by an SA-11 missile the aircraft wreckage and black boxes will probably not tell us who fired it and why. That will take finding actual parts of the missile and potentially someone actually owning up to firing on MH17.

Peter Hollingsworth receives funding from UK Department of Business innovations and Skills, the UK Environment Agency and Rolls-Royce. He is affiliated with American Institute of Aeronautics and Astronautics. This article was originally published on The Conversation. Read the original article.