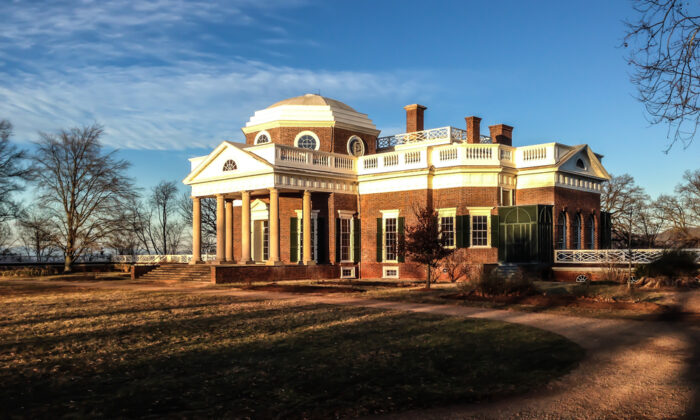 Over the course of 38 years, Thomas Jefferson would turn a two-bedroom house into a piece of architectural wonder—Monticello. (Shutterstock)
Home

When Thomas Jefferson originally moved into the South Pavilion of his Monticello estate in 1770, it was little more than an incomplete two-bedroom brick building and a cleared mountaintop.

Over the course of the next 38 years, the author of the Declaration of Independence would personally design and oversee the construction of his “essay in architecture.” The main house at Monticello, as it stands today, is a piece of architectural wonder; its design embodies themes derived from both Classical and Palladian styles of work.

While the Renaissance man himself was never formally trained as an architect, you can hardly tell, as his home consists of numerous unique features including a triangular pediment supported by Doric columns and his famous octagonal dome. Inside, the walls are covered with a variety of objects that highlight the former president’s interests and accomplishments. Even today, you can still find one of the last remaining original artifacts from the Lewis & Clark expedition—a pair of elk antlers—in the entrance hall. But just like the great Roman cities that heavily influenced the design of Jefferson’s home, Monticello wasn’t built in a day.

Despite the fact that Jefferson amassed a great deal of debt by the time of his death, which can largely be attributed to debts he inherited from his father-in-law and his extensive list of hobbies, one can hardly argue that he failed to make sound economic choices with regard to his early years of homeownership. People don’t start their adult lives the way early Jefferson did anymore. Today, most young individuals leave college and either become renters, pouring thousands of dollars a year into a property they will never own, or naively “take advantage” of artificially low-interest rates and acquire a mortgage they can barely afford to pay off. There is an alternative path, however, and it is very much akin to the home-owning path Jefferson took at the end of the 18th century.

The Tiny House movement, as it is commonly referred to, is gaining unprecedented traction in the United States and abroad. After the 2008 housing crisis, many individuals found themselves questioning the value of their assets and the stability of the global economy. These tiny homes, among others, are in many ways a direct response to the monetary disaster. Amazon actually sells these tiny homes, and they can be purchased for as little as $24,000.

Whereas there is no concrete definition of what a tiny house must be, there are some similarities among those that exist. Most tiny homes are smaller than 400 square feet, built on wheels (usually trailers), and powered by “off-the-grid” electrical systems. Many of these homes have also been designed to accommodate bizarre and remote locations. Ultimately, these tiny homes were designed by their homeowners to achieve a variety of goals: increase one’s financial independence, reduce their ecological footprint, foster a minimalistic lifestyle, and maximize their mobility.

Before you stop reading and disregard tiny homes as an absurd fad (after all, who would want to live in such a small space?), let us consider the economic validity of this technological innovation and how it relates to time preference. As Ludwig von Mises explained in “Human Action“:

“The value of time, i.e., time preference or the higher valuation of want-satisfaction in nearer periods of the future as against that in remoter periods, is an essential element in human action. It determines every choice and every action. There is no man for whom the difference between sooner and later does not count. The time element is instrumental in the formation of all prices of all commodities and services.”

By exercising a low time preference, which means delaying the immediate gratification of having goods now as opposed to later, an individual can save and accumulate capital for the future. Capital saved through the discipline of practicing low time preference spending can then be invested in higher-value goods without the cost of debt. This acknowledgment of time and our decision to trade it like a commodity by human beings, according to Hans-Hermann Hoppe, is how we instituted a “process of civilization.”

Investing in a tiny home is just an additional stepping stone in the long process of affording one’s dream home. No longer are individuals forced to make the drastic leap from renter to homeowner. By owning and living in this home for a few years, many of which can be designed for a fraction of the Amazon model mentioned above, you are capable of saving money that would otherwise be wasted on rent or spent on a mortgage. It is also important to remember that not every tiny home has to stay a tiny home. Just like Thomas Jefferson, who moved into a tiny brick building, a tiny homeowner can start out with one of these homes on a plot of land and expand their home as they continue to save more of their wealth.

I’m not saying everyone should go out and buy a tiny home or even suggesting that it is economically feasible for everyone, but it is definitely an option that every individual should consider in the face of a mortgage or renting.

Griffin Daughtry is a freelance writer, former graduate student of history, and a staunch advocate for individual liberty. This article was originally published on FEE.org