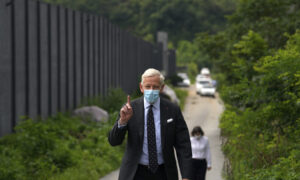 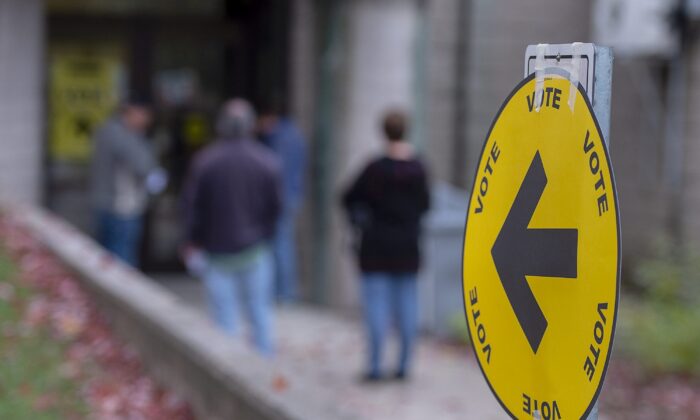 Voters head to cast their ballot at the Fairbanks Interpretation Centre in Dartmouth, N.S., during federal election on Oct. 21, 2019. (The Canadian Press/Andrew Vaughan)
Canada

What the Parties Are Campaigning On

Here’s a look at what the different parties are promising in the first week of the 2021 federal election campaign. Parties are presented in the order of the number of seats held as of the dissolution of Parliament on Aug. 15, from the highest to the lowest.

Campaign Slogan: Forward. For Everyone.

Justin Trudeau’s Liberals started their campaign by promising help for businesses recovering from the pandemic-hit economy.

The party is hinging its campaign on increasing vaccinations and fighting against COVID-19, providing affordable housing and a $10-a-day child-care program, cutting pollution and taking “bold climate action,” creating a “fairer and more equal Canada for everyone” and walking a “shared path of reconciliation” with indigenous peoples, and building a “green recovery from the pandemic.”

The Liberals are promising to extend to March 31, 2022, a hiring credit for businesses introduced as part of pandemic support, and foot the bill for up to 75 percent of wage and rent expenses for the hard-hit tourism industry. They also pledge support for the arts and entertainment sector in the form of matching ticket sales for shows and performances to compensate for reduced capacity, and extending COVID-related insurance coverage for media productions that have been stalled.

On Aug. 18, Trudeau made a campaign stop in Vancouver, as B.C. continues to grapple with devastating wildfires, and pledged $500 million to train 1,000 new firefighters and invest in firefighting equipment for the provinces and territories, while characterizing the situation as “a climate emergency.”

As the incumbent, the Liberals are campaigning on their record in office, touting enacted policies such as implementing the new Canada Child Benefit program, reducing the Old Age Security age from 67 to 65, launching initiatives under the “net-zero emissions by 2050” target, banning assault-style weapons, investing in LGBTQ2 service organizations, taking steps toward a national pharmacare system, lowering the small business tax rate from 11 percent to 9 percent, providing COVID-19 economic benefits such as CERB, and negotiating free-trade deals with other G7 countries.

The governing party, which had previously opposed vaccination passports, with Trudeau saying it would have “divisive impacts,” is making vaccines mandatory by the fall for federal public service employees and those working in and accessing federally regulated travel services, including passengers in the air, rail, and cruise ship sectors.

The Conservatives released their full platform very early in the campaign, promising expenditures to bring about economic recovery.

The party highlights its pledges in its 160-page plan as focusing on securing jobs lost due to the pandemic, enacting a new anti-corruption law and increasing accountability, delivering a new mental health action plan, bolstering the nation’s response to future pandemics and crises, and balancing the budget in 10 years.

If it forms the government, the party promises to subsidize hiring by paying up to 50 percent of the salary of new hires for six months, provide tax credits for capital investments and small businesses, and make loans available to small and medium-sized businesses.

The Conservatives would scrap the Liberal government’s national child-care program and instead introduce a tax credit to cover up to 75 percent of child-care costs for lower income families. As well, the party would increase the annual growth rate of health transfers to provinces. It is also touting its previously announced “carbon price” to meet Paris Agreement emission targets.

The party is promising a GST-free month to help retail stores recover, a 50 percent rebate on dine-in purchases for one month to help the restaurant sector, and a 15 percent tax credit for Canadians vacationing in-country to boost the tourism sector.

The Conservatives’ platform includes detailed foreign policy and defence sections, such as addressing Arctic sovereignty and cyberattacks and increasing defence spending. It also includes a detailed plan to stand up to “China’s aggression,” listing items such as working to decouple from China, supporting the Hong Kong freedom movement and persecuted groups in China, banning Huawei equipment to protect national security, and creating a foreign agents registry to combat Beijing’s influence operations.

The Bloc is continuing its Quebec-first pledge in this campaign, claiming that it’s the only party that pushes for the interests of Quebec at every opportunity.

The party is promising to pursue increased powers for Quebec on setting immigration policy; prevent any possible federal government interference with Quebec’s secularism law known as Bill 21; “protect and promote” French and ensure implementation of Bill 101; pursue legislation that would allow a single tax filing process for Quebec; create an automatic right of withdrawal from federal programs, with Ottawa providing full compensation instead, in areas under the jurisdiction of provinces; increase health transfers to cover 35 percent of health-care costs; and protect “Quebec’s environmental sovereignty.”

On the first day of the campaign, party leader Yves-François Blanchet called for having vaccine production capability in Quebec, and said Alberta needs to decouple from the oil and gas sector with help from Ottawa.

The Bloc says its full platform will be announced at a later date. Blanchet has said he supports vaccine passports for international travel. He said the province of Quebec requires mandatory vaccination and the federal government would be an employer like any other in the province, and it should “respect Quebec’s jurisdiction,” according to The Canadian Press.

Campaign Slogan: Fighting for You

The NDP launched its campaign by pledging to get money back from company executives who bolstered their bonuses while their companies received federal aid as part of the pandemic relief programs.

The party released its 115-page platform ahead of the election call. The plan calls for taxing the “super-rich” and would implement a new 1 percent tax on wealth over $10 million. It also increases the top marginal tax rate on wealth over $210,000 by two points to 35 percent, and increases the amount of investment profits subject to capital gains tax to 75 percent from 50 percent. Corporate tax would be increased to 18 percent, but small business tax rates would stay the same.

To help deliver its affordable housing pledge, the NDP proposes a 20 percent foreign buyers tax for residential real estate purchases. It also promises to build 500,000 units of affordable housing in collaboration with provinces and municipalities, and provide “fast-start funds” to help communities launch the building projects.

Party leader Jagmeet Singh says the NDP is the only party proposing a tax on the super-rich to deliver the programs it promises.

The party also plans on working with indigenous peoples to create a “National Action Plan for Reconciliation” and implement the UN’s Declaration on the Rights of Indigenous Peoples and the Truth and Reconciliation Commission’s 94 calls to action; set up a “climate emergency” cabinet committee to cut emissions; provide more support for LGBTQI2S+ communities; and “confront systemic racism.”

Singh says vaccines should be mandatory for federal workers, and those refusing to get vaccinated for reasons other than health should face discipline, “up to and including termination.”

Green Party Leader Annamie Paul started her campaign by calling for an end to oil and gas projects and a reduction of greenhouse gas emissions, saying her party’s campaign will be focused on a “green future and the climate.”

Paul wants to pursue a “green recovery plan” for Canada by transitioning workers to “the clean economy of the future while forging a just society in which all Canadians can live with dignity.”

During a campaign stop in Toronto on Aug. 18, Paul said there is a need for “radical reform” in long-term care. She also called for affordable housing and a guaranteed livable income, and said the social safety net needs to be bolstered with “universal programs,” including pharmacare, child care, dental care, and free post-secondary tuition.

Paul has said she wants to see details of the federal government’s mandatory vaccine requirements and how it plans to handle those who have religious or cultural reasons for not getting the shot.

Independent MP Derek Sloan announced the creation of his True North party just ahead of the election call, but since his proposed party wasn’t approved by Elections Canada by the time the writ was dropped, he can’t formally run candidates for this election.

However, the former Conservative MP says he and his supporters will organize for some candidates to run as independents, who will then join his party if they are elected once True North is formally approved.

Sloan says since his party isn’t officially approved he doesn’t yet have a formal platform, but issues of importance will include opposing carbon taxes, getting out of the Paris Agreement, opposing lockdowns and mandatory vaccinations, and promoting “faith, family, and freedom.”

At a rally in Alberta in late July, he said his party is going to be the “greatest patriotic movement Canada has ever seen.”

Sloan says his new party will continue to pursue the issues he focused on as an MP.

As an independent MP, Sloan has been vocal in his position on social media censorship, internet regulation bills Bill C-10 and Bill C-36, medically assisted dying legislation, net-zero emissions targets, and implications for children and parent relations in the legislation to ban conversion therapy, among other issues.

People’s Party of Canada Leader Maxime Bernier began his campaign by saying he won’t be announcing any spending programs. Instead, Bernier said his party will make realistic promises to “reform and improve the way Canada is governed.”

The party already has a platform, which includes balancing the budget in two years and boosting the economy by cutting taxes rather than making expenditures. The party says it intends to cut corporate tax to 10 percent from 15 percent, and gradually abolish the personal capital gains tax by decreasing the inclusion rate from from 50 percent to 0. The party says it would also “counter anti-oil and anti-pipeline propaganda from radical environmentalists and foreign foundations.”

The People’s Party intends to uphold firearms rights and tackle censorship, revisit equalization payments to avoid a “welfare trap,” give provinces incentives to deal with wait times and the rising costs of the health-care system, remove interprovincial trade barriers, end the dairy supply management system, and withdraw from the Paris Agreement.

The party also promises to reduce overall immigration levels and prioritize bringing in skilled immigrants, end “open border policies” and prioritize refugee applicants from persecuted groups, repeal the Multiculturalism Act and instead emphasize “the integration of immigrants into Canadian society,” enact more legislation to support veterans, and review federal spending on indigenous programs to ensure the programs “are better targeted to benefit the indigenous population.”

Bernier has said his party is against mandatory vaccination.