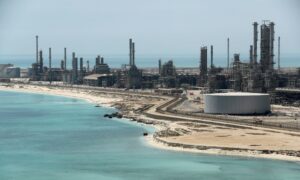 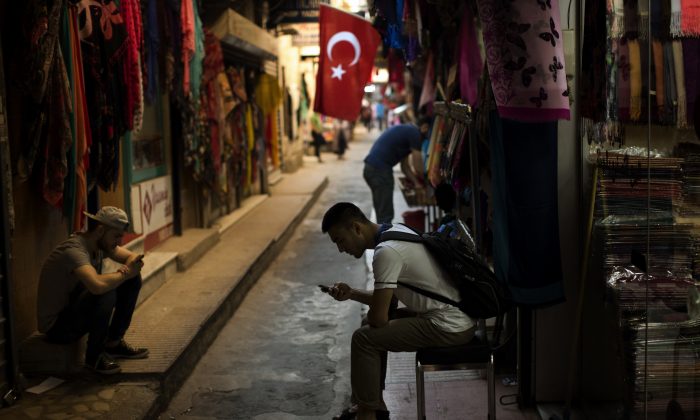 Sellers wait for customers as they look at their phones in central Istanbul, Monday, July 18, 2016. Warplanes patrolled Turkey's skies days after a failed coup, officials said Monday, in a sign that authorities feared that the threat against the government was not yet over. (AP Photo/Emilio Morenatti)
Middle East

The Turkish government’s crackdown on alleged plotters and government opponents since July 15’s failed coup attempt has been swift and far-reaching.

Within five days, the government fired more than 50,000 people from state jobs and arrested 9,000 others.

But according to some observers, President Recep Tayyip Erdogan may be using this as an opportunity to mute opposition and expand his power, raising questions about what the July 15 incident will ultimately mean for democracy in Turkey.

Fethullah Gulen, a Turkish cleric who has lived in self-imposed exile in Pennsylvania since 1999, is accused of being behind the coup. Gulenists have a strong foothold in government institutions from the military to the judiciary.

In 2000, Gulen was accused of setting up an illegal organization to undermine secularism in Turkey. When Erdogan came to power in 2002, the two men worked together to change the secularist order of the state. However, they became enemies after Gulen challenged Erdogan’s tightening grip on power, with tensions peaking in 2013.

However, the current crackdown goes beyond the Gulen movement.

“We need to see whether they are all linked to this coup attempt in Turkey or Erdogan is using this as an opportunity indeed to crack down on all opposition figures within the state apparatus and different organizations,” Murat Seyrek, a senior policy advisor at European Foundation for Democracy, said in an interview with Sky News.

“Erdogan got a wake-up call in the elections last year when in the first round he was denied a majority. That greatly unnerved him. So to augment his presidential powers, he needs to go the extra mile,” said Reva Goujan, vice president of global analysis at Stratfor, a geopolitical intelligence firm.

The speed of arrests was not surprising, according to Goujan, given that Erdogan had already been collecting intelligence on Gulenists before July 15.

“The military was the most critical threat. Erdogan knew he had to do this [purge] incrementally because the coup was exactly what he was afraid of. He just did not feel capable of doing that in one big swoop, but now he has the reason to do it,” said Goujan.

Since 1960, the military in Turkey has positioned itself as the guardian of the secular constitution, taking over the country when the pendulum has swung too far in the other direction.

However, this time, even long-standing critics of the Erdogan administration condemned the plot as dangerous for democracy.

Although Erdogan is accused of undermining the secular foundations of the Turkish Republic, and the coup’s failure will indeed bolster his autocracy. Had the coup succeeded and Gulenists taken over, the blow to democracy would have been even more severe, according to observers.

That is why even opponents of the president and opposition parties have united against the plot. For instance, CNN Turk, which is generally seen as anti-Erdogan, played a key role in defeating the coup when Erdogan connected to the news channel via FaceTime and asked citizens to take to the streets to oppose the military.

Being against the coup does not automatically make you democrat and that is why we need to see the next steps of Erdogan.
— Murat Seyrek, European Foundation for Democracy

Many average Turks also did not support the coup attempt. But that doesn’t mean they fully support the president. Scenes of pro-government extremists chanting for the Islamic State during the anti-coup demonstrations, and images of a young soldier being decapitated by these groups, disturbed them greatly. People condemned these scenes on social media.

“Being against the coup does not automatically make you democrat and that is why we need to see the next steps of Erdogan,” Seyrek said.

There are many theories about the origin of the coup. Inconsistent information has puzzled Turks and reduced trust in the country’s overall governing system.

“There is no institution or order in this country that you can trust anymore,” said a 42-year-old accountant from Ankara, who prefers to stay anonymous.

It will take a long time for Turkey to repair its military after a rebellion of such scale.
— Reva Goujan, Stratfor

“We have become a nation of fear, the whole system has collapsed. We are heading toward a new regime. It feels like we are on a movie set,” commented an entrepreneur in Istanbul.

She also raised concerns about the crackdown creating a security loophole, after thousands of military and security personnel including generals and admirals were arrested.

“Our military is so weakened I wonder if we can defend our country against the external threats?” she said.

Goujan states in a July 19 report: “It will take a long time for Turkey to repair its military after a rebellion of such scale. The Gulenists purged hundreds of military personnel in their time [2011-2013]; now thousands more, including senior commanders, are being culled from the ranks.

“Kurdish militants, radical leftist groups, and the Islamic State will be able to use Turkey’s extreme vulnerability to carry out more attacks and feed the forces polarizing the state,” she writes.

Trust is deteriorating as a result of this crackdown, which may transform Turkey into a police state, according to Goujan.

The government said it is considering reinstating the death penalty too, a practice abolished in 2004 as part of Turkey’s bid to join the European Union.

The coup attempt is bad news for the economy as well.

“Erdogan’s recent, somewhat skin-deep reconciliation with Russia and Israel was likely motivated by a desire to restore flows of foreign capital and tourists. Such hopes are now unlikely to be realized,” stated Dani Rodrik, professor of international political economy at Harvard University, on Project Syndicate‘s website.

“The failed coup reveals that the country’s political divisions run deeper than even the most pessimistic observers believed. This hardly makes for an attractive environment for investors or visitors,” he wrote.