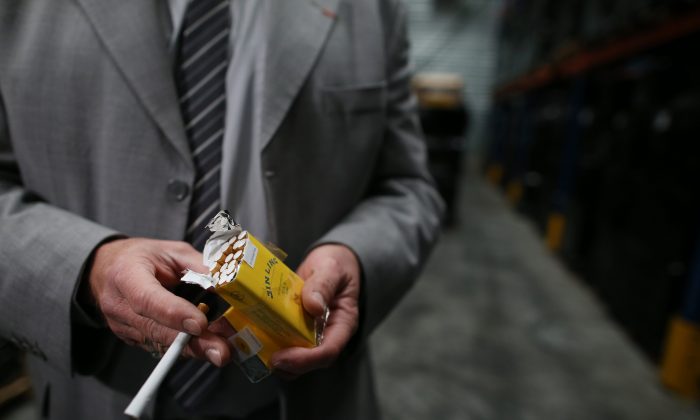 A French customs officer holds a pack of cigarettes, part of the 14 million seized by the French customs in Le Havre harbor on Oct. 9, 2015. (Charly Triballeau/AFP/Getty Images)
Opinion

What the EU Has Done to Take on Big Tobacco

Three landmark cases in the E.U. Court of Justice have dealt an important blow in the long-running campaign by Big Tobacco to use legal challenges to avoid regulation. The big question at stake is about how effective is the E.U. at taking on the might of the multinationals—the huge and well-funded companies in the tobacco industry—in the name of health protection.

The decisions, which unequivocally support the E.U.’s latest package of tobacco regulation, will be warmly greeted by pro-Europe campaigners in the U.K.’s referendum—such as Scientists for E.U.—who argue that on balance, staying in the E.U. is better for health.

One case was brought by the Polish government and the others were referred by the English High Court, which asked the E.U. court to interpret E.U. law. Based on this judgment, the English court will now decide claims brought by tobacco companies, or suppliers to the industry and a retailer of e-cigarettes.

The E.U. began to regulate tobacco in the late 1980s, as information about the dangers of tobacco came to greater public awareness and the E.U.’s competence to regulate in its market expanded. Of course, the world knew about the dangers of tobacco well before that—see, for instance, the U.S. Surgeon General’s Report of 1964 and earlier research such as the work of Doll and Hill in Oxford in the 1950s.

But it is notoriously difficult for governments or international organizations to control the tobacco industry. Tactics include undermining anti-tobacco cancer research, relying on ideas such as freedom or human rights, appealing to social norms, or drawing shocking historical parallels—which have included calling anti-smoking campaigners “Nicotine Nazis.”

Then factor in the level of lobbying and persuasion of law and policy-makers, which is considerable. And the power of these companies to engage in expensive litigation tactics, which—in the case of tobacco—include repeatedly making the legal argument that the E.U. has exceeded its powers.

The question in these recent cases was whether the E.U. is competent to adopt the latest Tobacco Products Directive of 2014, which must be implemented in national law by May 20 2016. That directive revises and tightens up existing E.U. rules about cigarette packaging, prohibits vouchers and discounts, and strengthens health warnings.

The directive also prevents misleading words on cigarette packaging (such as “natural,” “slim,” or “light”) and regulates the size of packages, banning what have been called “lipstick-style” packs of fewer than 20 cigarettes which are targeted at women and young people. It also sets rules about flavorings and additives such as menthol or cinnamon, which are used to make cigarettes more palatable—especially for young people when they first try them—and regulates e-cigarettes and other novel tobacco products.

The E.U.’s court has ruled that the E.U.’s powers allow it to adopt the directive. The judgment stressed that the E.U. must secure high levels of health protection in all its policies, including its trade law. It rejected arguments that relevant E.U. laws are a disproportionate paternalistic incursion on autonomy, by emphasizing that the rules seek especially to protect young people.

The court confirmed that E.U. law may adopt a precautionary approach when the dangers associated with new products, such as e-cigarettes, are still being explored. It also rejected arguments based on freedom of expression, including the freedom of companies to advertise, saying that these entitlements are outweighed by the “proven harmfulness of tobacco consumption.”

The E.U. court confirms that the directive does leave discretion to member states. In the U.K. there has been discussion about whether this includes power to adopt plain packaging (as in Australia), or standardized packaging—which was called for in the independent report by Sir Cyril Chantler, and adopted by the Children and Families Act 2014.

Note that the current U.K. government does not intend to adopt plain packaging, and the question of whether it could lawfully do so was debated only as a theoretical or hypothetical one in the legal hearing.

Taking On the Smoking Guns

The E.U.’s track record on tobacco regulation is far from perfect from a health point of view. The imbalances of lobbying power are legendary: the World Health Organization (WHO) noted that some 20 people advocated the health policy aspects of this directive, whereas more than 160 lobbyists represented the industry.

In October 2012, the E.U. health commissioner John Dalli resigned amid allegations uncovered by the European Anti-Fraud Office regarding links between Dalli and the tobacco industry. Dalli was unsuccessful in subsequent legal claims about the nature of the resignation process and the European Union’s ombudsman has recommended release of all pertinent documents after the conclusion of those proceedings.

The E.U.’s tobacco law has been hailed as a public health success story—and perhaps with some justification. From a position in which several E.U. countries had no effective tobacco regulation at all, by the early 1990s the E.U. had adopted a suite of laws on tobacco product regulation, labeling, and packaging and taxation.

From the 1990s onwards, E.U. anti-tobacco law has proceeded at a slower pace, involving a “nudging” approach focused mainly on young people. There is undoubtedly more that the E.U. could do to stop Big Tobacco, especially as it develops new products. But the E.U. has been more effective than its member states acting alone. And its transparency rules mean citizens have greater abilities to track industry influence on policy than in many of its member states.

The example of E.U. tobacco regulation is important for the U.K. referendum. There are understandable concerns about the impacts of E.U. membership on health issues. But let’s look beyond the discussions of the NHS and TTIP—important as they are. If there is political will to go further in regulating tobacco than E.U. law requires, our government has the discretion to do so. But E.U. laws provide a public health baseline, which even the tobacco industry cannot easily undermine.

Tamara Hervey is Jean Monnet professor of European Union law at the University of Sheffield in the U.K. This article was originally published on The Conversation.