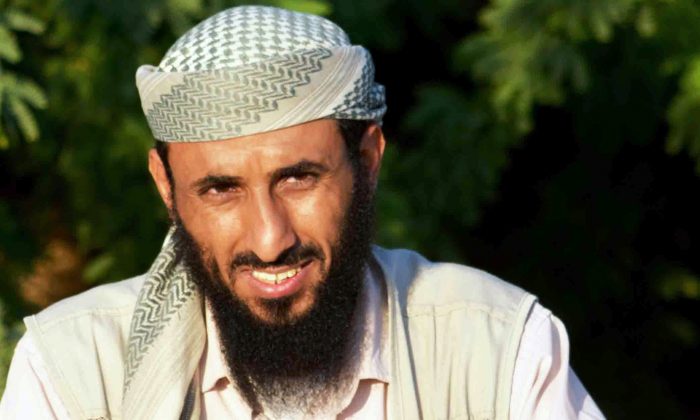 Al-Qaeda in the Arabian Peninsula (AQAP) chief Nasser al-Wuhayshi pictured in the militant stronghold town of Jaar, in the southern Abyan Province, on April 28, 2012. (AFP/GettyImages)
News

The killing of Nasir al-Wuhayshi, the leader of al-Qaeda’s most deadly and feared affiliate by U.S. officials—al-Qaeda in the Arabian Peninsula (AQAP)—and al-Qaeda core’s general manager (sometimes referred to as al-Qaeda’s Number 2), if true, is significant.

He was a former top aide of Osama bin Laden, thought to be a front runner to lead the global al-Qaeda franchise if its current leader—Ayman al-Zawahiri—was killed, and co-creator of AQAP, which has focused intently on attacks against the West, something that stems from bin Laden’s ideological playbook.

While his killing will deal a marginal blow to his affiliate, his death poses a much greater blow to the global al-Qaeda name. Additionally, his killing signifies that the U.S. continues to treat al-Qaeda as a significant threat while it is focused on rolling back the Islamic State group—a former al-Qaeda aligned group and now a chief rival.

Even without any personnel in Yemen, the U.S. continues its aggressive counterterrorism program of systemic leadership decapitation to degrade such groups. However, this is a flawed approach, which will be discussed in greater detail below.

First, as alluded to above, Wuhasyshi was al-Qaeda’s general manager, which among other tasks associated with such an important job for a global terrorist organization included coordinating attacks and communication among other affiliates.

His death will deal a significant blow to al-Qaeda’s central leadership, which, in addition to being described as on the run and decimated by the Obama administration—a relatively accurate statement—its current leader has struggled to rally forces and maintain basic leadership in the face of beefed-up Western counterterrorism attempts against the core’s hideouts and in the face of rising defections from those who wish to join the presently attractive and apparently successful model demonstrated by the Islamic State.

“Without Wuhayshi, Zawahiri’s ability to project his leadership is in even greater crisis,” a security brief from the Soufan Group read, a security and intelligence firm located in New York.

For its part, AQAP has achieved a great deal of success recently capturing the province of “Hadhramaut and its capital at Mukalla, Yemen’s fifth largest city. This is AQAP’s largest-ever stronghold. It is carrying out terror attacks on Houthi targets from its stronghold,” wrote former CIA official Bruce Riedel referencing Shiite Houthi rebels.

AQAP will likely continue its recent push of success in the face of a deteriorating security situation in Yemen in which the internationally recognized president has fled, Shiite rebels control wide swaths of territory and a nascent Islamic State province is vying for greater legitimacy—pitting all these groups against each other.

For core al-Qaeda, it is discovering that it is having greater difficulty exercising control over affiliates. “Al-Qaeda is in danger of becoming a loose affiliation of local groups that only share an increasingly irrelevant name. As a global terrorist movement directed primarily against the United States, it appears a shadow of its former self,” the Soufan brief continued.

“Even Jabhat al-Nusra, the al-Qaeda affiliate in Syria, is likely to find itself increasingly trapped in a nationalist agenda as the alliance of Syrian rebel groups that it leads, Jaish al-Fateh, takes over more territory, and as it tries to distinguish itself from the Islamic State as an exponent of a more thoughtful and ‘moderate’ terrorism. The hardcore al-Qaeda veterans within Jabhat al-Nusra, referred to as the Khorasan group, will begin to feel that they are the last of the old guard rather than the leaders of the future.”

To that end, Clint Watts, Senior Fellow at the Foreign Policy Research Institute—a Philadelphia think tank—and former FBI counterterrorism official outlined a three-pronged scenario for the future of global jihad in light of the rise of the Islamic State and its public split from al-Qaeda, which proved to be a bit of an embarrassment for the most successful global terrorist group to date.

Among the three scenarios, Watts outlined the possibility of organized umbrella groups dissolving into regional nodes.

“Two forces, al-Qaeda Central and ISIS infighting and the continued trend towards self-funding, might dissolve common notions of large jihadi organizations and alliances. Al-Qaeda affiliates and regional upstarts may find little incentive to hitch their group to a volatile global jihadi alliance that would only erode their local popular support without bringing in outside resources, operational capability or ideological clarity,” Watts wrote.

“Affiliates will remain more tightly wound regionally, but might only maintain very loose connections between regions; more similar to how jihadi groups operated during the inter-Afghan jihad period of the 1990s.”

According to reporting by the Daily Beast, AQAP has “already named a successor, Qassem al Rimi. The rapid appointment of a new leader speaks to how critical Wuhayshi’s position was within the organization. But it also suggests that the group’s overall structure remains strong because he was so quickly replaced.” The same can be said for other groups such as al-Shabaab in Somalia.

However, a figure as prominent and highly regarded as Wuhayshi is a good get for the U.S. But with other reports of a strike against al-Qaeda aligned leaders in Libya, it appears that the U.S. is merely trying to take out as many leaders as possible, which as noted above, does not always bode well for degrading terrorist organizations. So-called “body counts” are not always the most efficient metric for determining success.

Rather, a more formidable strategy for degradation—as defeating these groups has proven highly unlikely as evidenced by the fact that no group (not even al-Qaeda in Iraq, the Islamic State’s predecessor, was defeated despite opinions to the contrary)—have been totally defeated, is one that involves a more sustained ground presence.

“[S]triking at militant figures, then using the intelligence gained from such strikes to continue to hit the terror network again and again, never allowing the militants time to recover,” was part of the strategy that dismantled al-Qaeda in Iraq according to Lt. Gen. Mike Flynn (ret.), former head of the Defense Intelligence Agency.

Flynn described to Foreign Policy that taking out high profile leaders causes voids within groups and while they only have a “short term impact,” a continued response such as the one outlined above could prove helpful in bringing down a network, such as that of the militant killed in Libya. Though AQAP’s network is becoming more entrenched in Yemen and might be more difficult than bringing down other smaller, less established networks.

The U.S must continue to learn from counterterrorism mistakes and build on successes. The killing of Wuhayshi is by no means a small measure, but al-Qaeda’s Yemeni affiliate, whether it is connected with al-Qaeda or not (it will continue this relationship for the foreseeable future) poses a distinct threat to the region and to U.S. interests.