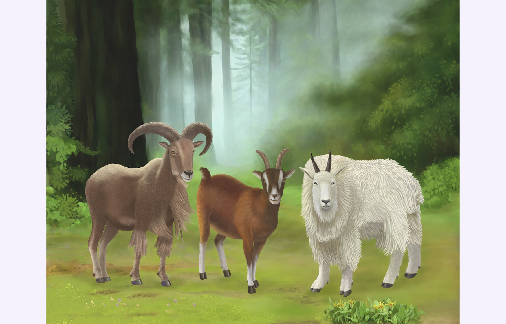 “Three goats bring harmony” is one of the popular greetings for the Year of the Goat. On the arrival of the Chinese New Year under the Goat zodiac sign, Chinese people will greet one another with such good wishes when they meet. (SM Yang/Epoch Times)
China

What the Chinese Say About Year of the Goat People

This year, Chinese New Year falls on Feb. 19th. It will begin the year of the Goat, which is considered a particularly auspicious time.

Chinese people use the character 羊, “yang,” as a general reference to the goat, sheep, ram or lamb. However, to mention any of them specifically, two characters are used, all of which have combinations with the word “yang.”

Goats are considered extremely curious and intelligent. Compared to sheep or the ram, they are believed to have relatively more strength and courage. This might be why the goat was chosen as the “羊” zodiac animal.

Goats are seen as calm, quiet, and elegant creatures. People born in the year of the Goat are believed to share these and other particular characteristics.

Goat people tend to be fond of nature and are calm individuals. They enjoy living their lives in their own quiet way and they often care little about other people’s opinions of them.

People with this sign usually appear to be helpful, charming, and well-mannered. They are kind at heart and commonly have pleasing symmetrical features, which can attract many friends and admirers.

They like to be in the company of others but do not wish to be the center of attention, preferring instead to stand in the background and watch contently as others dazzle the company.

Although reserved, Goat people function well in groups and tend to conduct business cautiously. They can generally do better than they themselves expect because they are so good at keeping the peace and accomplishing the tasks at hand.

In their daily lives, they tend to be thrifty, light-hearted, and spiritual. They are fond of horoscopes, therefore, it is not unusual to find them working as astrologers or fortune-tellers. Many of them are religious, too.

Year of the Goat people are said to be creative, artistic, and talented. They enjoy cultural things and focus much of their energy on artistic hobbies.

Goat people are usually very romantic, sensitive, and sweet. However, insecurity can be one of their weaknesses. They need to feel accepted, loved, and protected. In relationships, they can be a little bit bossy and lazy but, because of their gentle and caring nature, they eventually get what they want.

Goat women have a tendency to look for a wealthy partner so that they can sit back for the rest of their quiet lives without worrying too much about money.

Another general characteristic of Goat people is a fear of conflict. They do not like to lead and seek to avoid confrontation. They shy away from making heavy decisions and refuse to take a stand that might cause controversy.

Goat people also tend to be somewhat pessimistic, hesitant, and dependent, so many of them do not seek positions of power or status. Due to these personality traits, they prefer instead to be part of a well-ordered group.

Although they might not have all the qualities to be leaders and are not so predisposed, they can make excellent editors, pediatricians, daycare teachers, art historians