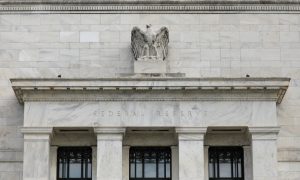 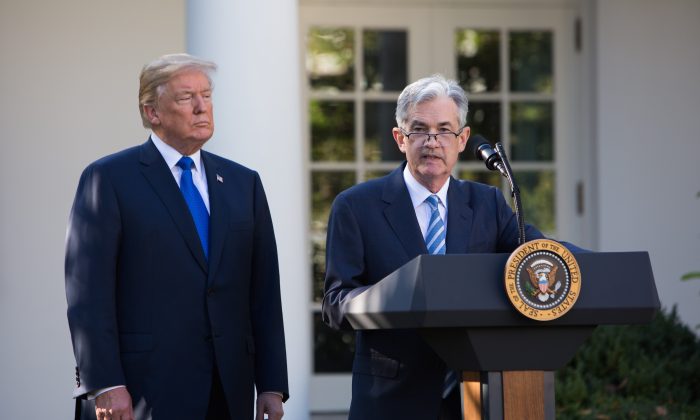 President Donald Trump announces Jerome Powell as the new chairman of the U.S. Federal Reserve in the Rose Garden of the White House in Washington on Nov. 2, 2017. (Samira Bouaou/ The Epoch Times)
Viewpoints

With economic slowdowns in Europe and Asia, what actions, if any, can we expect from the Federal Reserve?

If that sounds like a loaded question, that’s because it is. The Fed has a very mixed bag to deal with in the U.S. economy. Adding to its challenges is the pressure from the Trump administration to keep rates low. Fed Chief Jerome Powell – a Trump appointee – is facing mounting criticism from the Whitehouse for slowing down the economy with interest rate hikes and the reduction of the Fed balance sheet.

At the same time, Powell is trying to hold onto his job and maintain his independence in the face of Trump’s thinly-veiled threats to fire him. Meanwhile, Powell’s predecessor, Janet Yellen, felt the need to weigh-in from Hong Kong, intimating that rate hikes shouldn’t continue in the near future, and that, if anything, rate cuts are in order. Talk about undercutting your successor. Poor Jerome can’t get a break.

What’s more, the conflicting data doesn’t help the situation, either. But some signs of economic stress are present.

The economy is going great guns, so what’s the worry, right? Unemployment is at record lows in every demographic, manufacturing jobs are returning, wages are rising, hundreds of billions of dollars in offshore money is being repatriated, household wealth is at new highs – whatever could be the problem?

The 3-Month Treasury bill rate surpassed the benchmark 10-year Treasury note rate last month, the yield curve is now inverted, an accurate indicator of recessions. Lower rates on 10-year notes mean that investor sentiment for the longer term is bearish. Investors prefer short-term T-bills. That’s something we haven’t seen since 2007 and is a major indicator of a negative market outlook.

Does that mean that we’re headed toward another 2008 meltdown? There are some who think so. Their logic is rather compelling, by the way.

On the surface, it looks like the banking sector is in better shape than in 2008 – banks are better capitalized and the reforms of Dodd-Frank have somewhat limited risky trading practices – for now. But there’s more than one way to measure market strength. Big banks such as Wells-Fargo, Citibank and Deutsche Bank face greater legal risks due to illegal behavior such as fraud.

And this seems to be the trend. That in itself should be a red flag. Fraud can often be a sign of weakness.

For example, bank executives who decide that they must defraud millions of their customers in order to hit profit or activity goals have a bigger problem than simply shoddy ethics. It’s a clear indication that their customers either can’t or won’t use their services. The question bank executives should ask themselves is, “Why is that?”

There are a few reasons for that and they don’t bode well for the economy and the markets.

In the aftermath of the financial crisis, America ended up with fewer and bigger banks than before the meltdown. That means that a small group of too-big-to-fail are carrying more liabilities than they were in 2008. If even one of them mismanages their portfolio, is over-leveraged, or finds itself in deep legal problems, the impact of a single failure could have a much greater impact on the economy than in the Financial Crisis.

Shadow Banking and AI – New Threats to the Financial System

Another trend in the financial industry that poses a systemic risk is “shadow banking.” This is an unregulated area where private equity firms and other financial channels create credit that can seriously overleverage the system. These obligations aren’t seen on typical bank books, but they’re there, with the potential to disrupt or distort capital markets in ways that aren’t easily recognized or quickly fixed.

Shadow banking is primarily a symptom of traditional banking’s failure to meet consumer and business demands. It exists because it fills a vacuum in the market.

Artificial Intelligence and machine learning are new technologies to the financial world – what could go wrong? With financial institutions automating credit decisions based on algorithms and risk matrices, the humanity of banking – a contradiction in terms if there ever was one – is further removed. Many potentially credit-worthy customers are denied access to loans. Hence, the emergence of shadow banking.

In such a climate as we’re in now, the term, “too big to fail” becomes more applicable than ever.

On the consumer front, U.S. household debt is higher than ever, at more than $13.2 trillion. In 2008, it was $1 trillion less. Today, consumer debt averages around 10 percent of income, well below the 13 percent in 2008, but revolving debt and installment loans have increased by 45 percent.

Forebodingly, 42 percent of that is student loan debt. Heavy education debt loads have spiraled since the financial crisis, more than doubling since 2008. For millennials, this debt burden threatens to strangle consumption levels and credit-worthiness going forward. That feeds into the need to rely on fraud when there’s too big of a gap between those offering financial services and those who need it.

These trends should sound alarms in the financial community, but will they? Probably not for a while yet. With the U.S. economy on a tear and interest rates remaining relatively low, we can expect further consolidation in the banking industry as well-healed banking giants go shopping for highly profitable smaller regional banks. In other words, more of the same activity that enhances big business activity, but not that of smaller ones.

Perhaps one of the biggest offsetting factors is the state of the rest of the world’s economies. Economic health is relative. The stronger U.S. economy – even with its problems, including slowing growth – is attracting capital from abroad.

But with near full employment and rising wages and minimal inflation, it’s arguable that a slowing growth rate in the U.S. economy is as much of a political problem as it is an economic one. That may well explain Trump’s pressure on the Fed to lower the interest rates.

If he’s successful, it may mean lower interest rates are indeed on their way. They may help in the short term, but they won’t address the real problems facing the economy.