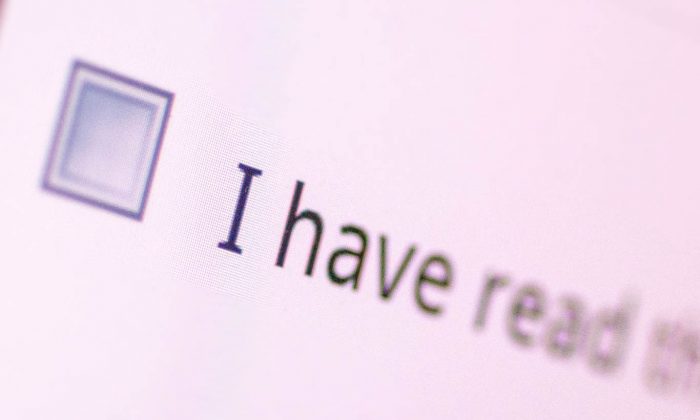 What Rights Do You Give Up By Clicking ‘I Agree’

With a slew of media reports last week, Samsung joined a long list of companies exposed for creepy terms of use clauses. In order to set up its voice recognition feature, Samsung Smart TV listens to your every word and sends it over the Internet for analysis.

The Terms of Use warn “personal or other sensitive information” will be “captured and transmitted to a third party.”

But Samsung’s terms are just the last in a long line of chilling End User License Agreements (EULA) we clicked through without reading them.

Skipping right to the “Agree” checkbox may never ever cause a problem. Past media reports show it seldom does. What’s scary about EULAs is the potential for misuse. Many companies carved out so many advantages for themselves, it’s hard to foresee how far they could take them.

Think of these examples:

Most common trick companies pull with their terms of use is denying you a class action lawsuit.

“You and _______ are each waiving the right to a trial by jury or to participate in a class action. Any dispute, claim, or controversy shall be determined by binding arbitration.”

A Google search of the exact phrase “waiving the right to a trial” plus the words “terms of use” returns over 50,000 results, including Netflix, PayPal, Sony—the list goes on.

And unlike many judges, arbitrators don’t tend to favor the little man.

Sony lets you opt out of the arbitration clause if you snail mail them a letter within 30 days.

Do you need somebody’s work phone number? No problem. You look the person up on Linkedin, copy-paste the phone number … Wait a moment. Its terms of use say that:

“You agree that you will not … [c]opy or use the information, content or data of others available on the Services (except as expressly authorized).”

The User Agreement doesn’t seem to authorize users to copy phone numbers in any way.

You can export your Linkedin contacts. That way you at least get their names and emails. No phone numbers though.

Do you need somebody’s work phone number? No problem.

Has anybody shared your photo? Sorry. Unless all copies are gone, Facebook keeps a license to it. Twitpic even claims the license for a “commercially reasonable” time. If there’s any money to squeeze out of your pictures, even quitting the service won’t help you.

What few people realize is that if you ever took a photo that may be worth something, you may have a hard time selling it if it was ever posted to such platforms.

Even though the popular social media sites acknowledge you as the owner of all submitted material, the license you gave them prevents you from ever granting an exclusive license to anybody else. Just something to keep in mind.

Have you ever thought of programming a mobile app? You better be on good terms with the platforms. Microsoft, Google, and Apple all reserve the right to pull an app, even though millions of people may have downloaded it and paid for it already. To be sure, there don’t appear to be reports of these companies ever taking down a legitimate app in this way.

You Don’t Own your Games

Do you indulge in the comfort of electronic game releases? Think again.

Steam, a popular online game store, let’s you pay for and download games, but it doesn’t actually sell them. It only sells “a limited, terminable, non-exclusive license” to use them. Note the word “terminable”—the fact that you paid for a game today, doesn’t give you the right to play it tomorrow.

Unlike the mobile apps that go for a couple bucks a piece or even for free, new game releases sell for as much as $60 and it is not uncommon for players to have games worth hundreds of dollars on their online accounts.

Next time you’re presented with that mind-numbing block of fine print, you may want to skim it after all. Or you may fancy this website that does so for you. Not only does it conveniently flag for you the potentially fishy sentences, but it even gives you a nice statistical overview. You shouldn’t mistake it for legal advice though, the website warns.

This article should not be considered legal advice either.