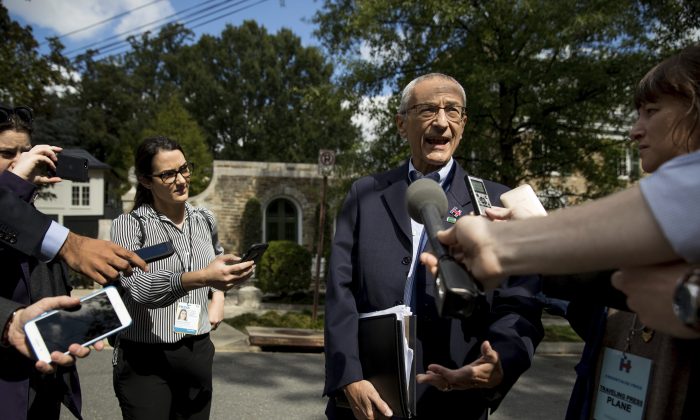 In this photo taken Oct. 5, 2016, Democratic presidential candidate Hillary Clinton's campaign manager John Podesta speaks to members of the media outside Clinton's home in Washington. As early as last December, the Clinton campaign was planning to neutralize Democratic National Committee Chairwoman Debbie Wasserman Schultz and forcing her out after the party convention was one of the options under discussion, according to the latest WikiLeaks release of emails hacked from the accounts of Clinton campaign chairman, John Podesta, which were posted Tuesday, Nov. 11, 2016. (AP Photo/Andrew Harnik)
Politics

It was a rare window into the inner workings of an elite political operation when Wikileaks released tens of thousands of emails belonging to John Podesta, the former chairman of the 2016 Hillary Clinton presidential campaign.

The emails also revealed the arcane world of political journalism, where reporters haggle for scoops and campaign staff for control over the narrative.

Journalists are expected to develop trust with their sources, but discovering how deeply, at times, the media were willing cooperate with the Clinton campaign proved hard to stomach for many Americans.

For example, on April 30, 2016, Politico’s Ken Vogel shared his story on Clinton’s campaign fundraising, before it was published, with Mark Paustenbach, then-national press secretary of the Democratic National Committee.

Politico spokesman, Brad Dayspring, later tried to explain that Vogel “was attempting to check some very technical language and figures,” The Hill reported. “There were no substantive changes to the piece.”

Exactly a year earlier, Politico’s Glenn Thrush did virtually the same thing, sending a large portion of his story, before it was published, to John Podesta, a leaked email showed.

“Because I have become a hack I will send u [sic] the whole section that pertains to u [sic],” he wrote. “Please don’t share or tell anyone I did this.”

Thrush, who has since moved to The New York Times, wrote on Twitter after the emails were leaked: “My goal in emailing Podesta: TO GET HIM TO CONFIRM STUFF I HAD FROM LESSER SOURCES.”

My goal in emailing Podesta: TO GET HIM TO CONFIRM STUFF I HAD FROM LESSER SOURCES. It worked. Nobody controls my stories but me. Troll on!

“It worked. Nobody controls my stories but me,” he wrote.

But what if Podesta or Paustenbach demanded changes? Paustenbach was willing to ask for those, the email showed.

“Let me know if you see anything that’s missing and I’ll push back,” Paustenbach wrote, forwarding the email to another DNC staffer (even though Vogel asked him not to share the story).

Indeed, The New York Times’s Mark Leibovich sent, pre-publication, part of his interview with Clinton to Jennifer Palmieri, the campaign’s director of communications, another email showed.

Palmieri vetoed parts of the interview.

In the resulting profile piece, Leibovich said the whole interview was arranged as “off the record,” meaning he not only wouldn’t have been able to quote Clinton—he would have been unable to use any information she provided at all.

That was “highly irregular,” he noted. “[A]n off-the-record sit-down with a profile subject who happens to be running for president.”

Apparently, he was ultimately able to negotiate the use of vetted parts of the interview.

But giving sources power over the content of one’s story, even just by asking them to fact check it, can put a reporter in a difficult position. What if the sources start to second-guess themselves? In extreme circumstances, such a tactic may convince a reluctant source to share crucial information, but it is a last-resort tool.

To restore public confidence, the media need more transparency and accountability, according to Theodore Glasser, professor emeritus of communication at Stanford.

“Journalists need to respond to serious questions about why they do what they do,” he said. “That’s exactly what the American press doesn’t want to do.”

He’d like to see the return of news councils, panels of journalists and citizens reviewing public complaints about media, which they had in the 1970s and 80s, but “disappeared from a lack of public support and a lack of support from journalists themselves,” Glasser said.

Media also need to refocus on their primary job—keeping tabs on the workings of government, according to Edward Wasserman, journalism professor and dean of the Graduate School of Journalism at the University of California, Berkeley.

He believes the media have gone off track by dissecting statements of President Donald Trump, instead of focusing on what the Trump administration and the Congress actually do.

“Trump has become such a media property and he’s done so many good things for the media by drawing large audiences to them that the media are in favor of succumbing to a kind of celebrity journalism that really does not serve the public well,” he said.