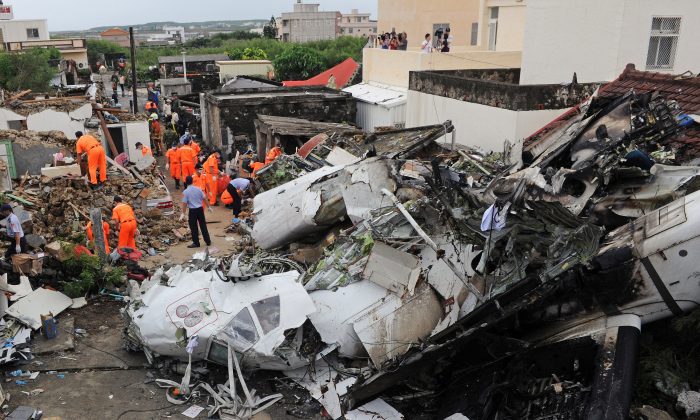 Rescue workers and firefighters search through the wreckage where TransAsia Airways flight GE222 crashed the night before near the airport at Magong on the Penghu island chain on July 24, 2014. Taiwan's TransAsia Airways said on July 24 that 48 people were killed and 10 survived when one of its turboprop passenger planes crashed after an aborted landing during stormy weather. (Sam Yeh/AFP/Getty Images)
Asia & Pacific

What Other Crashes Has TransAsia Suffered in 20 Years?

The crash of TransAsia Airways flight GE235 into Taipei’s Keelung river is the fifth time TransAsia has lost an aircraft since 1995, and the seventh overall safety incident.

TheATR-72 aircraft with 53 people on board crashed on Feb. 3 shortly after takeoff, killing at least 19 people.

TransAsia’s most recent, and the most fatal incident, was on July 23, 2014 when another ATR-72, attempted to land in stormy conditions. The aircraft crashed on Penghu Island in the Taiwan Strait between Taiwan and China, killing 48 people of the 58 people on board as well as damaging houses and cars on the ground.

There were two other fatal incidents in the last 20 years. On December 21, 2012, an TransAsia cargo plane crashed into the sea in icy killing both pilots. The investigation revealed that the crew dropped the plane to a lower altitude attempting to mitigate “severe icing.” The plane then stalled and ultimately crashed.

In 1995, an ATR 72-200 operating at night, flew into a hillside 12 miles south of Songshan airport. All four crew died in the incident.

Three other incidents were non-fatal but one of them damaged the plane beyond repair.

In 2003 a TransAsia A321 collided with a vehicle on the runway during a night landing at Tainan. The aircraft had apparently been cleared to land, but the vehicle was on the runway without air traffic control clearance. The plane had  170 passengers. Although nobody was killed, the aircraft was deemed beyond repair.

In 2004, in rain and foggy conditions, an TransAsia A320 overran on landing at Songshan airport. None of the 106 passengers and crew on board was hurt in the incident. The aircraft did suffer damage but was repaired.

In July 2005, TransAsia ATR-72, the same aircraft that crashed on Wednesday, landed at Taipei Sung Shan Airport and accidentally turned into a road used by airport vehicles. The right wing of the plane hit a lamp post. Passengers were forced to deplane and the aircraft was towed in for repair.