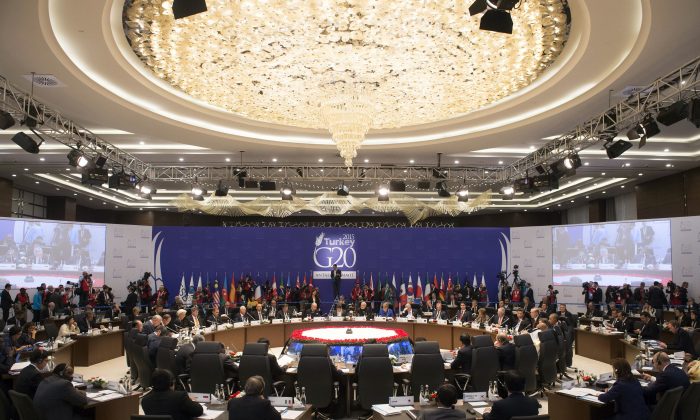 World leaders attend a working session on the Global Economy at the G20 Summit in Antalya, Turkey, on Nov. 15, 2015. (Saul Loeb/AFP/Getty Images)
Opinion

In the wake of the atrocities in Paris on Nov. 13, it is no surprise that the Group of 20 meeting in Turkey has turned to the issue of terrorism and Islamic State (ISIS).

If the world leaders present had ignored the Paris attacks, it would have been seen as myopic and a denial of the responsibilities of political power. Nevertheless, just as at the St. Petersburg meeting in 2013, the agenda set by the host has been blown off course by events.

The gathering may be an excellent additional opportunity for a select group of world leaders to meet and discuss the big issues, but the question must be asked: What exactly is the point of the G20?

The group started, like the G7 and G8 before it, with a tight focus on global financial issues and the world economy. Since the first meeting of finance ministers and central bank governors in 1999, however, it has widened its remit ever further.

In 2008, it became a meeting between the member countries’ heads of state, and this year, the main meeting is accompanied by five further established engagement groups of ministers, officials, and civil society representatives, plus a new one launched by the Turkish hosts: W20, or Women20. I leave readers to appreciate the irony here.

Like much high-level multilateral diplomacy, the G20 is great on gesture politics.

The G20 meeting has become a summit for global leaders, ministers, interest groups, and the media, and has started to look a little like a public sector version of the World Economic Forum (WEF). Like the WEF, the group’s main output is news stories and pronouncements about trends and objectives over which the group collectively has little agency. Indeed, there is now a random quality to this group, with little to distinguish its symbolic outputs from other global groups.

Like much high-level multilateral diplomacy, the G20 is great on gesture politics: We have seen outrage and sorrow expressed about Paris, and according to the Turkish host’s original agenda, we were also to be treated to a celebration of “inclusiveness” focused not on excluded groups but on small and medium-size enterprises—the much-championed SMEs of global innovation.

This year, the Turkish presidency of G20 also has sought to focus on implementation, perhaps recognizing that in the past, the group has proclaimed much but delivered little. It hasn’t made much difference.

The G20 is like a parked car, waiting each year for a driver to take it out for a spin.

A Car Without a Driver

Indeed, Anthony Payne of Sheffield University recently suggested that the G20 is like a parked car, waiting each year for a driver to take it out for a spin. And of course this is exactly the problem.

Flitting from agenda to agenda, the G20’s membership—and its shifting annual presidency—is too diverse to produce anything more than gestures that some leaders may find helpful in their domestic policy making. Next year’s presidency will be held by China, which will doubtless cause the agenda of the group to change again.

So if the G20 is not about actually doing things itself, what is it for, and who are its gestures aimed at? After all, in a global Venn diagram, the G20 overlaps with the Organization for Economic Cooperation and Development (OECD), which has 12 members that are also in the G20.

Certainly, there are useful opportunities for out-of-sight meetings between those who might prefer not to be seen conversing in public. President Barack Obama and Russian President Vladimir Putin took the opportunity to meet discreetly in Antalya this weekend—although photos were still tweeted, so it wasn’t that out of sight.

The G20’s membership is also wider than that of the (now moribund?) G8, and as such may be a way of introducing middle-ranking countries to the ways of the global political elite(s).

Here, Turkey’s invites to the chairs of ASEAN, the African Union, and NEPAD (respectively, Malaysia, Zimbabwe, and Senegal) make some sense. Equally, for new leaders such as Canada’s Justin Trudeau, it’s a great opportunity to indulge in a little political speed dating—as his breathless tweets indicate.

Other than that, though, it is difficult to see what the G20 has achieved that would not have come to pass anyway. We might celebrate any opportunity for countries’ leaders to familiarize themselves with those whom they might need to negotiate with in the future, but little of substance is generated by the meetings themselves.

Each summit creates a lot of sound and light, but in the weeks and months that follow, it is more difficult to identify any lasting effects, before the car returns to the car park to await its next driver.

Christopher May is a professor of political economy at the Lancaster University in the U.K. This article was previously published on TheConversation.com