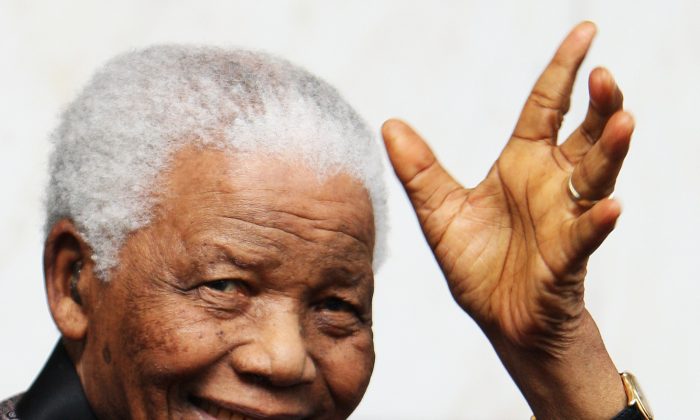 What More Is There to Learn From Nelson Mandela?

Just days before he died on Thursday, Nelson Mandela’s daughter Makaziwe Mandela told SABC, the state-owned television network SABC that her father (from his first marriage) was teaching the family life lessons from what she termed his “deathbed.”

“Even, for a lack of a better word, on his deathbed, he is teaching us lessons; lessons in patience, in love, lessons of tolerance.”

Thanks to the release of the new epic movie, Mandela: Long Walk to Freedom starring Idris Elba and Naomi Harris, the public is learning other lessons about the freedom struggle that he led.

On Christmas day, it opens nationwide in the United States on 2000 screens, with a majority of reviews very positive. It is already showing in France, and England will be next in January.

In South Africa, the movie that shows Mandela’s early days as a boxer broke all box-office records.

At the same time, no one movie can hope to tell the full story of a life that has spanned 95 years. Hollywood-style storytelling inevitably telescopes history, compresses characters, and seek to entertain more than inform

Some of the critics make this point, even as most were laudatory. A few found it too rushed, others too long, or they dwell on missing context, and insufficient history, as does Simon Abrams on RogerEbert.com: ”The prison guard insists that Nelson and his wife should not talk about politics, and Long Walk to Freedom’s creators honor that request. Instead, they talk about how they feel about politics. So the raised tone of Winnie’s voice is more important than the content of her words.”

Critical nitpicking aside, many can agree with the LA Times’s conclusion: “This may be a familiar story, but it is one worth experiencing again and again. “ And, that’s also why the AP reviewer noted, “This is the perfect time for youngsters (or their elders) who don’t know enough about the man to go learn about him.”

And that’s also precisely why the film’s producers asked me to draw on many of the interviews I did for a companion documentary series on the making and meaning of Long Walk to Freedom for a book that seeks to tell some of the rest of the story. “Madiba A to Z” (Seven Stories Press) is now out in the United States and in South Africa.

To supplement Mandela’s own autobiography and the many biographies about them, I look at what insiders realize but many in the adoring public do not. Quite a few who do know him well are loving but privately critical (and self-critical), most deeply aware of the limits of the changes in South Africa almost twenty years after the end of apartheid and the coming of democracy.

I spoke to many key players and insiders, including two former presidents, DeKlerk and Mbeki and Deputy President Motlanthe, his prison comrades and fellow ANC activists including Archbishop Tutu, as well as thoughtful writers like Nadine Gordimer and Njabullo Ndebele.

Here are some highlights from an investigation that features intimate stories on 26 aspects of Mandela’s life and times.

•The key finding is how many of the “stalwarts” of the struggle including Mandela himself are privately disappointed with the “progress” that’s been made and have “regrets” with the ANC’s many failures in a way we haven’t seen before.

•Thabo Mbeki told me that the problems of South Africa have not changed very much from 1994 because of the greed of the white business community and its failure to invest in job creation.

•Madiba A-Z explains that there were top-secret economic negotiations alongside the televised political talks that allowed the World Bank and global business leaders, especially powerful Americans, effectively to limit what South Africa could do to regulate industry and fight poverty. This is what led to the neo-liberal policies South Africa was pressured to adopt in the name of pro-market stability.

Promised jobs and investments by an adoring world, few were forthcoming. Poverty in South Africa today is as bad as it was when Mandela was elected in 1994.

Other points of special interest:

• The armed struggle fought by the ANC’s guerilla army Umkhonto we Size was also aided by the Vietnamese army after the defeat of the U.S. led war in that country. The Cuban defeat of South African military forces in Angola helped spur negotiations.

•While Mandela deserves credit for engineering a peaceful political settlement, it was external pressure including economic and cultural sanctions demanded by a global anti-apartheid movement that brought decisive leverage on political leaders to negotiate. His law partner, Oliver Tambo’s role as ANC leader was probably more decisive in orchestrating pressure when Mandela was behind bars.

•While Mandela was hailed by a cheering world for his iconic role, he was often personally miserable because of the break-up of his marriage and the bitter internal battling inside the ANC. He survived long years in prison by “going inside,” and often had to do the same as President.

These are just a few of the disclosures as I dealt with the “many faces” of a leader so many think they know, but often only one dimensionally, as I explored Mandela as a villager, bully, boxer, prisoner, lover and womanizer, peacemaker and legend.

Throughout his political struggles, he rejected the idea that he was a “savior” and always embraced collective leadership even as the media lionized him and treated him as a “brand” or celebrity.

The media and even the movie avoid deeper political debates and minimize the role of a bottom-up movement for the decisions of a top-down leader. News reports of pervasive corruption today rarely reference how corrupt the Afrikaner regime had been.

The enormity of what he and South Africa achieved in resolving conflicts can best be seen when compared to other conflicts in the world that ended more violently, or not at all.

Recall what else was going on in this period — genocides in Rwanda and the Balkans, or today’s unresolved fighting in Syria and Egypt. If leaders in those countries had adopted Mandela’s approach to reconciliation, the outcomes might have been different

How he helped guide a peaceful outcome in a racially explosive society is a story that even now is treated superficially by the press there and here, when at all.

What emerges is a portrait of a man, and a troubled nation as well as the texture of a struggle that, despite many gains, is still fighting for true freedom. After his release from prison, Mandela was told, “Well now you’re free.” And he said: “No, we’re freed to be free.”

News dissector Danny Schechter directed six documentaries about Nelson Mandela. More news about the book and its author, including a selection, can be found at Madibabook.com He blogs at Newsdissector.net and edits Mediachannel.org. Comments to dissector@mediachannel.org.