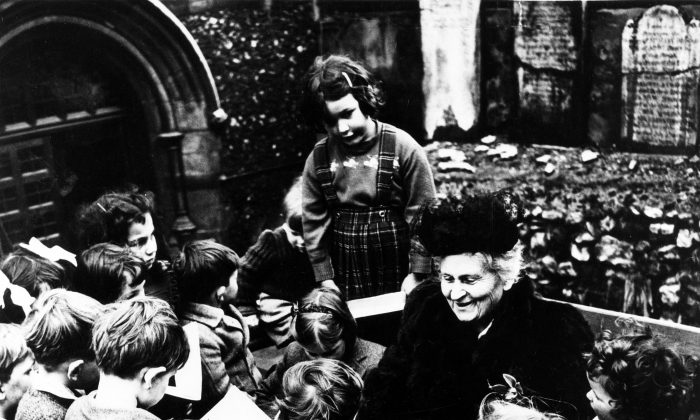 Italian educator Maria Montessori is surrounded by children as she visits a Montessori school in London, England, sometime in the late 1940s. (AP Photo)
Northern California

What Montessori Has to Offer

SAN FRANCISCO—Montessori Family School head Jane Wechsler didn’t set out to become a teacher or the founder of a school. Now, looking back, she can see how she was put on this path.

“It was the absolutely best path for me,” she said.

During a summer job in the Lower East Side of New York City, she worked on a project for disadvantaged children. Her supervisor Shirley Chisholm, who later became the first African-American congresswoman, one day took her aside and said, “You know, Jane, you have more talent working with these children than a lot of other people here who have degrees.”

A few years later, at the home of friends in Westchester, New York, she heard the five children praying: “God bless our teachers. We love our school.” It turned out that they went to Whitby School in Greenwich, Connecticut.

Wechsler said she went to visit the school and “fell in love with it.” She stayed as a volunteer for almost a year.

Whitby School was headed by the founder of the American Montessori Society, Nancy Rambusch, who had reintroduced the Montessori teaching method to the United States in 1958.

Montessori schools were popular after Maria Montessori (1870–1952), Italy’s first female physician, presented her teaching method to the public. In San Francisco in 1915, she demonstrated her method at the Panama-Pacific International Exposition by means of a glass-walled classroom.

In the 1920s, however, Montessori schools had virtually disappeared in the United States.

“The most important thing in Montessori education is that you are responsible for the lives of the future that are going to be responsible for this planet. It is not learning in the classroom that is the goal. The goal is the human being that the child will become, the adult,” Wechsler said.

Wechsler started to work as a Montessori teacher after moving to Berkeley, California. In 1981, she founded her own school, the Montessori Family School.

In his talk “How to Escape Education’s Death Valley,” British author and educator Sir Ken Robinson argues that the U.S. “No Child Left Behind” legislation actually leaves millions of children behind.

Robinson, who moved to Los Angeles in 2001, ranks as the most-viewed speaker on TED.com. His three talks have been viewed 21.5 million times.

Robinson speaks of the high dropout rates from high school to illustrate his view that the currently predominant U.S. education system doesn’t work. In some parts of the country, 60 percent of kids drop out of high school; among Native Americans it is 80 percent of kids, he said.

Robinson said education should recognize that children are different from each other, curious, and inherently creative. As encouraging examples, he mentioned alternative education programs integrating dropped-out youth back into school.

If schools individualize teaching and learning, give high appreciation to teachers and the teaching profession, and are allowed to take on responsibility at the school level, then students will most likely flourish like Death Valley after inches of rare rain, according to Robinson.

Wechsler said, “On some level people understand that every brain is different, but they are not willing to do anything about that.” Montessori, however, was willing to acknowledge that each child is unique, and developed a teaching method that meets children where they are.

Wechsler received a master’s degree while she was working as a teacher in Berkeley, as well as her Montessori certification for age levels 3 to 6 and 6 to 12.

Wechsler’s Montessori school grew quickly and now has 150 students enrolled at two sites, ranging in age from 3 to 12.

Ms. Montessori observed that children learn by doing. In the “prepared environment,” as she called it, the child is given a sequence of experiences from which genuine understanding arises. For example, she made letters out of sandpaper so the children could trace them, say them, and see them.

She “observed that the children loved the letters,” Wechsler said. “They were like a door to freedom, because with these letters they could also start to write phonetically and read.”

Kathy Ma’s son, now 23, went to a preschool in San Leandro. “He started reading books at Montessori. When he went to the kindergarten and another school, the teachers said, ‘Wow, he can read a lot,'” Ma said.

Beth Lambert Jen recalled her experiences at a Montessori elementary school in San Diego: “I was a bit of a late bloomer. The structure of the Montessori classroom—along with the teacher I had—allowed me to move forward at my own pace. By the end of third grade, I had not only caught up, but was also outscoring my classmates on standardized tests.”

Lynda Sakseangvirat, who works for the federal government, had her two children attend a preschool and later an elementary school, both with a Montessori approach. She said that they were “teaching the child to be able to do something and have the teachers just help, guide, and coach them, so that they can learn on their own and think on their own, instead of allowing others to think for them and tell them what to do.”

“Help me to do it myself,” is one of Montessori’s key concepts. Wechsler said that if you help children to do something themselves, you “empower them, and that is really what builds self-esteem. You cannot convince a child that they are good or wonderful just by telling them.”

Montessori often referred to teaching as an art. Wechsler said, “The art of teaching is giving the right experience or presentation to the child when they are ready to receive it.”

When teaching children according to Montessori, the teacher never makes the students feel bad.

“You are very truthful with the children. You’d say, ‘This is a computational error. It’s not a big deal. You made six out of ten, which probably means that you were going too fast, because I know you can do this,'” Wechsler said.

“It’s a very creative form of teaching because you are constantly modifying what you do, based on the children in front of you,” she said.

Having lived through two world wars, Montessori envisioned education as a contribution to a peaceful world. Wechsler said that when conflicts arise among the children, “some classes have a peace table where the children can go and have a conversation about their conflict.”

Older students may have a circle, a coming-together, or a class meeting where they can talk about things that are going on in the classroom. “They are very good at problem solving,” Wechsler said.

“I think the two major tenets in the Montessori classroom are love and respect. There is great respect from the adult for the small child and the human being they will grow up to be, the adult, and there is great love because, I think, that is the organizing factor for humanity,” Wechsler said.

She added that a lot of people “take Montessori out of context” when they see that children learn to read at such an early age, are good at math, concentrate, sit still, are well-behaved, or raise their hands. But they do all these things out of respect for one another.

“What she [Montessori] would say is, ‘Put your work back on the shelf, so that your friend can find it.’ Nothing is about a rule that is made by a grown-up. It’s about, ‘how can we be together in a community?'”

Reuben David Goodman had the fortune to attend the Indian Montessori Training Course in 1974 in the Indian city of Ahmedabad, given by the Dutchman A.M. Josten, whose mother was one of the original students of Maria Montessori.

“I feel children should be encouraged to have free and creative play, be taught social skills, how to socialize with others, how to share, and how to have empathy and compassion for others,” said Goodman, who now lives in San Francisco.

No Need for Alternatives

After highlighting the advantages of alternative education programs, Robinson said, “If we all did that, there’d be no need for the alternative.”

Wechsler said that Montessori never envisioned private Montessori schools, “which is much more what we have in America. But it’s changing; there are charter schools.”

In 2012, the National Center for Montessori in the Public Sector was founded. According to its website, the number of public Montessori schools is growing exponentially, from less than 100 in the 1970s to nearly 500 now.

With 44 public Montessori schools, California ranks third among the states with the most such schools, after South Carolina and Arizona, according to the center’s statistics.

Robinson said that by halving the dropout rates of the country’s high school students, “one estimate is it would create a net gain to the U.S. economy over 10 years, of nearly a trillion dollars.”