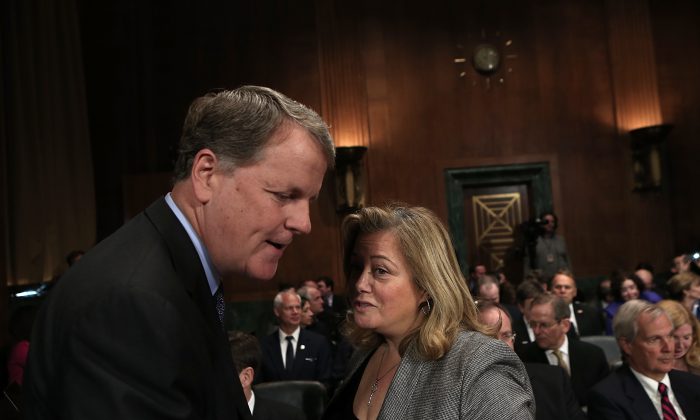 Douglas Parker (L), chairman and CEO of the US Airways Group, speaks with lobbyist Hillary Rosen before a hearing of the Senate Judiciary Committee in Washington, D.C., on March 19, 2013. Parker and Horton testified before the committee on the topic of The American Airlines/US Airways Merger: Consolidation, Competition, and Consumers. (Win McNamee/Getty Images)
Opinion

What Makes a Strong Lobbyist

Because of its power to influence public affairs, the press has long been known as “the Fourth Estate.” But I think the media may have been displaced. These days, it’s lobbyists who seem to carry the most clout in Washington.

Here’s a case in point. When Congress closed at the beginning of August for its end-of-summer recess, it faced wide-scale derision for having accomplished next to nothing during the year. In fact, the Pew Center ranked the session as the least productive in two decades.

But it wasn’t entirely unproductive. Just before they left town, members of Congress did manage to get three things done: they passed a Veterans Administration reform package; they increased aid to Israel; and they kept highway construction projects around the country from losing funding.

Why did these three measures find success when so many others did not? There’s a two-word answer: Powerful lobbyists. Veterans, supporters of Israel, and the combined weight of highway construction interests and state and local governments are among the most influential forces in Washington.

Last year, some 12,000 active lobbyists spent $3.24 billion on trying to influence the federal government, according to the Center for Responsive Politics. I don’t know of any other country where lobbyists have those kinds of numbers, spend that kind of money, or get the kinds of results they’re able to achieve here—in Congress, in the executive branch and, increasingly, in statehouses around the country.

But even among all those lobbyists, some stand out for their effectiveness. The National Rifle Association (NRA), the American-Israel Public Affairs Committee (AIPAC), veterans’ groups, the AARP: all are very good at obtaining laws and policies in their interests and blocking laws and policies they consider harmful.

I don’t mean by this that they’re all-powerful. They don’t win every battle. But they do win most of them.

How do they do this? To start, lawmakers have to get elected. Good lobbyists don’t just provide large amounts of money for campaigns, they provide early money and expert help. They donate, they introduce you to other donors, and they help you establish connections that can help during your campaign and later on.

Early money in politics is better than late money. Candidates remember that sort of thing. They also remember that if you oppose these organizations’ views, they’ll come at you hard.

Good lobbyists and their organizations also provide information in easily digestible form. They’ll assign particular staffers to develop relationships with members of Congress—people who can write a speech or testimony or legislative language quickly. They and their colleagues are sophisticated observers of public affairs who know whether, when, and how to approach government policymakers, along with the particular policymaker who can help them best.

They are deeply knowledgeable about the process of government and have a wide network of friends on Capitol Hill, in the agencies, and in members’ districts—often, their most effective voices aren’t Washington lobbyists, but the grass-roots networks they’ve built back home. They understand that at heart, lobbying is about establishing relationships long before any particular issue affecting them comes up, so that when they go to talk about a bill, they’re going in to see a friend.

They build relationships in several ways. There are all kinds of approaches to members—the annual policy conferences to which members of Congress flock, the sponsored trips and meetings in out-of-the-way resorts where a lobbyist can get a few days of a member’s undivided attention. But the best lobbyists are also friendly, approachable people who know how to talk to members and policymakers of both parties.

The best lobbying groups also have a lot of money and resources not just to woo policymakers, but to shape public discourse. They make good information available to their advocates, and make sure that the advocates who speak for them on television, online, and in newspapers are well informed. They know that part of the battle is to shape public dialogue.

The best lobbyists are masters at making the system work for them. My guess is that their influence over policy surpasses the media’s clout, and they have now become the fourth branch of government.