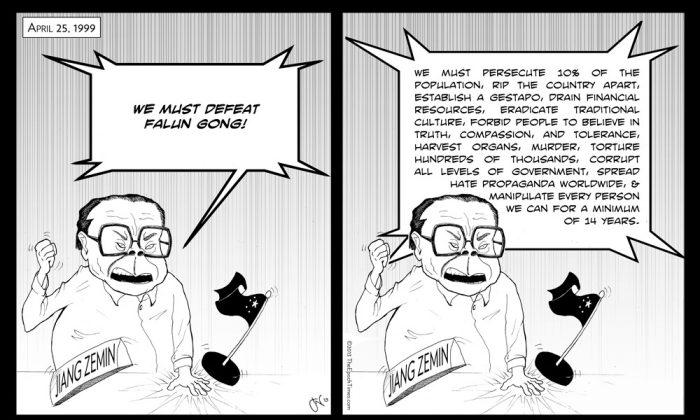 The logic, if it can be called that, of former Chinese Communist Party leader Jiang Zemin on the night of April 25, 1999, will go down in the annals of history.

That evening he wrote a letter to leading cadres, dispatched from the Party’s Central Office, explaining why a group of nearly 100 million peaceful spiritual believers in China needed to be arrested, tortured, and brainwashed into relinquishing their faith.

Many in the Communist Party were already opposed to striking out against Falun Gong, a traditional Chinese practice of meditation and spiritual cultivation that had gained unprecedented popularity throughout the 1990s. But Jiang saw things in rather different terms than most other people.

On April 25, 1999, the silent gathering of 10,000 practitioners of Falun Gong outside the Chinese communist leadership compound was greeted by then-premier, Zhu Rongji, with a meeting. He wanted to know what their concerns were, and why they had come.

The practitioners had been harassed by police for several years, their books had been banned from publication, and most recently, a number of them had been beaten and arrested for engaging in a quiet protest in a nearby city. They sought redress.

In China, where the Communist Party’s control and “management” extends down to nearly every corner of society, and the public has no effective channel of mediating disagreements with the regime, often the only option left is to stand on the street and wait to be heard. Falun Gong practitioners were doing that.

But to Jiang, the fact that this large group even existed in China was an affront.

“I feel very deeply sorry that we were not alerted earlier about such a kind of national organization, with many followers from the Communist Party, officials, scholars, soldiers, as well as workers and peasants,” he wrote.

He noted that this was “the largest-scale gathering in Beijing since the 1989 political event,” referring to the pro-democracy protests in Tiananmen Square that ended in a bloody military crackdown.

Jiang stressed the ideological challenge posed by Falun Gong’s beliefs: “The occurrence of this event illustrates what a poor job on ideology and people some of our offices and departments have done!”

Jiang’s answer to Falun Gong? Another bloody crackdown—though this one has been carried out with secret police, forced confessions, marathon propaganda sessions on prime-time television, forced ideological study, pledges of allegiance to the Chinese Communist Party and its doctrines of atheism and Marxism-Leninism, and, for all those, who would not repent their beliefs, lengthy prison sentences, torture chambers, labor camps.

The result is that 14 years later, thousands of innocent people have been tortured or beaten to death (the real number is likely magnitudes higher), tens of thousands are suspected of having been murdered for their organs, a society has been fractured, and immense destruction, atrocity, and tragedy have been wrought upon China for no tangible benefit.

“We must stick to the education of officials and the people with a correct outlook on the world, life, and values,” Jiang wrote in his April 25 letter.

“Can the Marxism, Materialism and Atheism that our Communist Party members uphold not win the battle with what Falun Gong promotes?”

The letter continued: “This is absolutely ridiculous!”

Ridiculous does not begin to describe it.