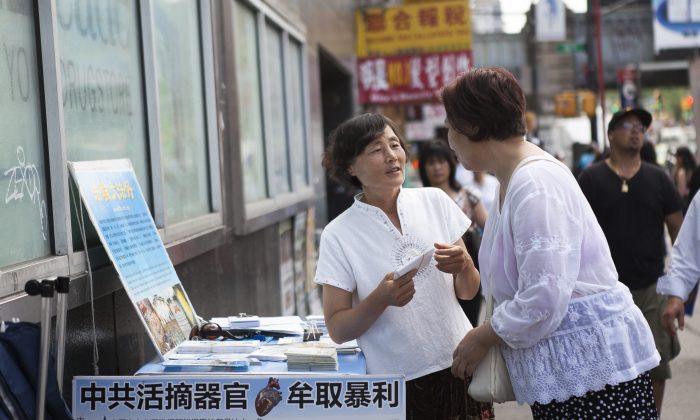 Tuidang, meaning “Quit the Party” in Chinese, is the largest grassroots movement in history. Started in 2004, it has helped 200 million Chinese people renounce their ties to the Chinese Communist Party and its affiliated organizations. Through the work of volunteers in China and around the world, renunciation statements are collected and posted to the Tuidang Center’s Chinese-language website.

Ever since it seized power in 1949, the Chinese Communist Party has coerced hundreds of millions of ordinary Chinese to pledge loyalty to its totalitarian rule. Upon joining the Party and its associated organizations, Chinese people make a vow to dedicate their lives and their blood to struggle for communism.

Children are brought into its grasp starting in elementary school, where students, under pressure from teachers and peers, are initiated into the Young Pioneers. Older teens are expected to enroll in the Communist Youth League.

With the unnatural deaths of least 60 million Chinese under communism, the Party has shown it takes these oaths literally. When Epoch Times began publishing the “Nine Commentaries on the Communist Party” editorial series in November 2004, Chinese people began contacting the paper expressing their desire to withdraw from the Party, and the Tuidang movement was born. Tuidang seeks to gradually disintegrate the Party by encouraging each Chinese to reject the regime.

Tuidang is facilitated in China by an estimated 20 million volunteers, many of them practitioners of Falun Gong, a traditional spiritual practice targeted for eradication by the Communist Party since 1999. Leaving pamphlets and posters on doorsteps, parked bicycles, in public transit, on telephone poles, sending mass text messages, or calling their fellow citizens directly, these volunteers risk detention and torture to spread information about the movement.

Outside China, volunteers place calls to China asking individuals to renounce the Party, or give Chinese the opportunity to do so at tourist sites or in Chinatowns.

Every person renouncing the Party or its affiliated organizations must be verified by a Tuidang service volunteer before he or she can be included in the tally. Software designed to circumvent the Chinese regime’s “Great Firewall” can be used to reach the overseas-based Tuidang Center site directly, or one can verbally declare one’s statement to a volunteer. The Tuidang site’s required fields include name (or pseudonym, recommended for safety), statement title, and number of people included in the renunciation.

Some Chinese, unable to reach either the Tuidang site or a volunteer, have physically written their renunciation statements on paper and posted them in public places.