DACA Amnesty: What Is the DREAM Act, and What Would It Do? 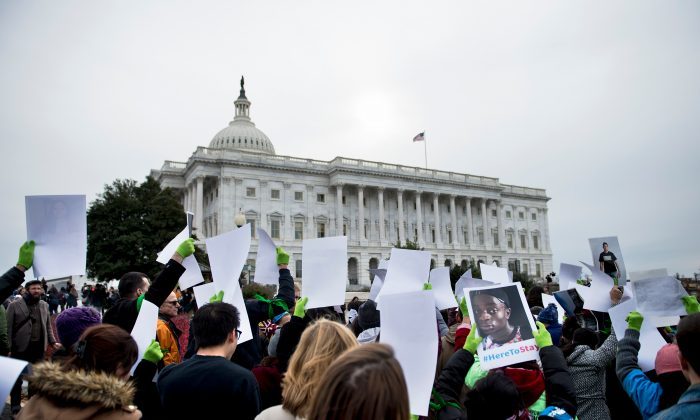 People protest the termination of the Deferred Action for Childhood Arrivals (DACA) outside the Capitol Building on Capitol Hill, Washington, on Dec. 6, 2017. (BRENDAN SMIALOWSKI/AFP/Getty Images)
By Charlotte Cuthbertson

WASHINGTON—The new year is expected to bring a frenzy of lobbying for the passage of the DREAM Act, or S.1615—effectively an amnesty for eligible illegal immigrants written into the Immigration and Nationality Act.

The bill was introduced to the Senate by Sen. Lindsey Graham (R-S.C.) in July and has bipartisan support. The DREAM stands for Development, Relief, and Education for Alien Minors.

Congress is under pressure to come up with a permanent fix for Deferred Action for Childhood Arrivals (DACA) recipients by March, after President Donald Trump rescinded the DACA program on Sept. 5.

DACA was introduced through an executive order by President Barack Obama in 2012 as a temporary measure that gave recipients renewable, two-year work authorization and deportation immunity.

The average age of a DACA recipient is 25, with the oldest around 37.

The DREAM Act goes further than providing permanent amnesty for DACA recipients, however. It would provide conditional lawful permanent resident (LPR, or green card) status to about 2 million of the country’s estimated 11 million illegal immigrants, according to Congressional Budget Office (CBO) estimates.

Trump has expressed sympathy for DACA recipients, said last April, that they could “rest easy.”

On Sept. 7, he tweeted, “For all of those (DACA) that are concerned about your status during the 6 month period, you have nothing to worry about – No action!”

For all of those (DACA) that are concerned about your status during the 6 month period, you have nothing to worry about – No action!

In October, Trump presented his immigration priorities to Congress that would have to be implemented before an amnesty for DACA was considered. The priorities include a wall along the southern border, a shift to a merit-based immigration system, and increased interior enforcement.

Right before the new year, Trump reiterated his stance, tweeting: “The Democrats have been told, and fully understand, that there can be no DACA without the desperately needed WALL at the Southern Border and an END to the horrible Chain Migration & ridiculous Lottery System of Immigration etc. We must protect our Country at all cost!”

A CBO report released on Dec. 15 has broken down the bill to show the numbers and estimated costs S.1615 would trigger.

What Does the DREAM Act Give?

The CBO estimates that 3.25 million illegal aliens meet the basic eligibility criteria, but, based on DACA application rates, about 2 million would apply and be approved.

“Their ages at the time they received the status would range from around 14 to the early 50s, with a median age in the late 20s,” the CBO report states. “The research indicates that the vast majority of conditional LPR recipients would be from Mexico or Central America.”

Applicants must meet the following criteria for conditional LPR status:

The current 700,000 recipients of DACA would be eligible.

So would children who are in the country illegally and meet the bill’s requirements, but are too young to start high school. They would be protected from removal until they enter high school and become eligible to apply for the conditional LPR status.

The bill also does not place an upper age limit on applicants, which DACA did (at 31 years).

Recipients would be expected to work toward removing the conditional part of the LPR and apply for naturalized citizenship within eight years.

The CBO estimates that of the 2 million initial recipients of conditional LPR, roughly 1.6 million would be granted unconditional LPR status during the 2018 to 2027 period. Unconditional LPR opens the pathway to full citizenship.

“Roughly 1 million of the 1.6 million people receiving unconditional LPR status would become naturalized U.S. citizens during the 2018 to 2027 period, and that a substantial number of people would naturalize in the following decades,” the CBO estimates.

“Naturalization primarily affects the federal budget by allowing new citizens to sponsor some of their relatives for LPR status in categories that are not subject to annual numerical caps.”

To be eligible for citizenship, people would have to meet several criteria, including at least one of the following:

Under the bill, people who fail to advance beyond the conditional basis of LPR status within eight years would lose eligibility altogether and revert to their prior immigration status.

The CBO estimates that most people would gain citizenship through meeting the work criteria.

The average age of a DACA recipient is 25, with the oldest around 37.

Only a few randomly selected DACA recipients were vetted through background checks during the original intake, and more than 2,100 recipients have since had their eligibility rescinded due to criminal convictions and gang activity, according to the Department of Homeland Security (DHS).

DACA recipients are not required to speak English and the application form has space for a translator.

The Center for Immigration Studies estimates that “perhaps 24 percent of the DACA-eligible population fall into the functionally illiterate category and another 46 percent have only ‘basic’ English ability.”

Congress is under pressure to come up with a permanent fix for Deferred Action for Childhood Arrivals recipients by March.

By the end of July, 820 DACA recipients had served in the military, according to DHS.

“We can’t keep on incentivizing illegal immigration and wonder why illegal aliens keep showing up,” he said.

The age cutoff for filing an application for DACA was 31 as of 2012, and Cutler is concerned about fraud. “Because there were no interviews and no field investigations, it is possible for illegal aliens who entered the United States well past their 16th birthdays to be able to game this process,” he said.

How Much Would Amnesty Cost?

The CBO estimates that the DREAM Act would generate a net cost of $26 billion over the next 10 years—assuming only 2 million of the 3.1 million eligible aliens sign up for it.

Most DACA recipients currently pay most taxes, but cannot receive most federal benefits. The DREAM Act would generate about $1 billion in extra tax revenue, but recipients would receive about $27 billion in new benefits, such as Obamacare subsidies, child tax credits, Medicaid, and food stamps.

Like other amnesties before it, a DACA amnesty would inevitably create a new surge of chain migration, according to Jessica Vaughan, director of policy studies at the Center for Immigration Studies (CIS).

“This is because the vast majority of the DACA beneficiaries originally arrived with their parents, and these parents plus any siblings typically are still living in the United States illegally,” Vaughan wrote on Sept. 27. “It is reasonable to assume that the DACA amnesty grantees would seek to sponsor their parents and non-citizen siblings at the earliest opportunity—which would be as soon as they obtain citizenship, under current rules.”

Most DACA recipients are from Mexico, which also has one of the highest rates of chain migration. In the most recent five-year cohort of immigrants studied (1996 to 2000), each new Mexican immigrant sponsored 6.38 additional legal immigrants, according to a CIS report.

Where the Act Currently Sits

The DREAM Act was introduced to the Senate by Sen. Lindsay Graham (R-S.C.), on July 20, 2017, where it was read twice and referred to the Committee on the Judiciary.

Three senators originally co-sponsored the bill, and seven more have since joined.