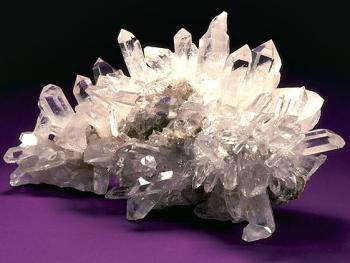 ALIVE OR NOT? Crystals grow, reproduce, consume energy, and respond to the environment. (Ken Hammond/United States Department of Agriculture)
Beyond Science

The definition of “life” is still unsettled in the world of science. Although at first glance, it may seem simple to distinguish the living from the nonliving, in recent years nature has provided researchers with many examples that challenge the boundary of the organic.

The classic biological characteristics that have been accepted for many years in categorizing something as “living” are basically growth and development, response to environmental stimuli, reproduction without external assistance, and energy consumption. But despite these parameters seeming to perfectly illustrate the life we know, they are also shared by many physical phenomena or objects that are commonly called “inert.”

One of the most viable examples of this paradox is crystals that grow, reproduce, consume energy, and respond to the environment. However, frontier science does not recognize rock crystals as being endowed with life. On the other hand, everyone recognizes that a sterile animal, physiologically incapable of reproducing, is alive anyway. And, technically, it’s also accepted that fire needs fuel for energy and can easily spread or reproduce.

“Every spontaneous chemical process must expend free energy, alive or not,” said Steven Benner, an astrobiologist at Florida University, who has also theorized on the subject of life, in the article Defining Life in Astrobiology Magazine.

For science, trying to understand what constitutes life is not merely a philosophical question, because the search for it on other planets (or in the most remote places on Earth) is closely linked to that fact.

But there is apparently a valid way to identify life apart from expressions or intricate patterns, a common factor shared by all beings that seem to possess the mysterious energy called “life”: It is DNA. Many believe they have found the answer to the million-dollar question in this wonderful and complex molecule.

In fact, according to the Astrobiology Magazine article, Dr. Benton Clark of the University of Colorado, NASA, and the technology company Lockheed Martin said there are about 102 observable characteristics in living things. Clark created a definition of life with three of the qualities: “Life reproduces, and life uses energy. These functions follow a set of instructions embedded within the organism.” This set of instructions is DNA and RNA, which are in the vast majority of our cells.

However, according to Clark, this criterion is too specific. Limiting ourselves to DNA and RNA as a requirement for life is recognizing a single form of life in the universe—life linked to carbon. It’s possible that there could be lives based on inorganic materials (that is, not associated with carbon). Some scientists have theorized that life could be based on silicon, an element in the periodic table near carbon.

Another theory, based on the Second Law of Thermodynamics that the universe always increases its entropy, or disorder, states that living systems are localized regions where there is a continuous increase in order without external intervention. This is perhaps the safest way, at the moment, to define what life is. But given the limit of our knowledge in the universe, maybe we should change our concept in a radical way.