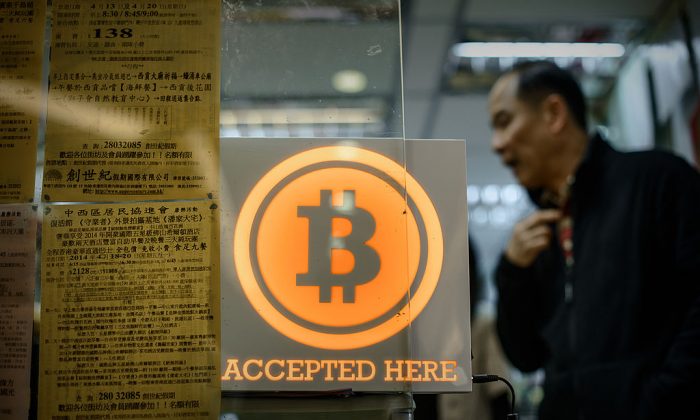 A man walks out of a shop displaying a bitcoin sign during the opening ceremony of the first bitcoin retail shop in Hong Kong on February 28, 2014. (PHILIPPE LOPEZ/AFP/Getty Images)
Business & Economy

What Is Going on With China and Bitcoin?

Last time around, the love affair with China and the virtual currency bitcoin didn’t end well. In December 2013, the Chinese central bank barred financial companies from having anything to do with bitcoin, and the price crashed from $1,095 to $105.

However, this love has been rekindled as the virtual currency quietly rose from $200 in August 2015 to $525 now.

“It went down for many reasons in 2014; the most important one was that it was too high. These days Chinese activity is driving the ascent in the price of bitcoin. There is not a lot of other factors going on right now,” says Gil Luria, head of technology research at Wedbush Securities.

Coincidently, bitcoin reached its bottom just after the surprise devaluation of the Chinese yuan against the dollar and about the time ordinary Chinese started to move money out of the country in earnest. Some of it leaves China via bitcoin.

“In countries … that struggle with high inflation and capital controls, you see a move toward bitcoin,” Tuur Demeester, editor-in-chief at Adamant Research, said in an interview with RealVisionTV.

The Chinese economy is struggling, and the banking system is loaded with bad debt.

Demeester likens the recent rise in bitcoin to what happened in Cyprus in 2013 when bitcoin first became mainstream news. As the banks in Cyprus closed down, the virtual currency rose from $15 to over $230 in the span of a couple of months.

“The price was going nowhere for the last two years, but in the past year, we have seen these trends. Back in 2013, Cyprus was the reason why bitcoin spiked in April 2013. Bitcoin survived, but the money that was in the bank didn’t,” Demeester says.

That may be the reason why Chinese are willing to pay hefty premiums to buy bitcoin to get rid of the risk of holding bank deposits in yuan.

In addition, even if the objective is to get rid of yuan, there are violent price moves even in U.S. dollars, like during the 2014 crash. So an ordinary Chinese citizen is paying up and taking a lot of price risk just to get rid of Chinese currency.

The amount of money that can be transacted via bitcoin is unlimited.

Since there are no transaction costs for shifting from yuan into bitcoin and from bitcoin into dollar, it means traders think the Chinese currency is at least 4.4 percent overvalued compared to the U.S. dollar.

“Even though 60 percent of the new supply of bitcoin comes out of China, despite that, you have these positive spreads on Chinese exchanges,” Demeester says.

The amount of money that can be transacted via bitcoin is unlimited—at least in theory—as bitcoin is not part of the limitation on overseas money transfers and investment opportunities.

“You can take bitcoin out to anywhere in the world, and that’s a way to get capital out of China,” Luria says.

We cannot ignore the revolutionary changes it brought to the financial sector.
—  Cyberspace Administration of China

However, China is the world leader in bitcoin mining (the mathematical process through which new Bitcoins are created) as well as bitcoin trading. Chinese bitcoin exchanges account for as much as 92 percent of global volumes (around $22.5 billion during the last 30 days).

So didn’t China ban bitcoin at the end of 2013? And why did the price crash so much?

“The Chinese government [was] highly worried that, if the banks and Alipay connect directly to the bitcoin infrastructure, the banks or Alipay will do something really stupid, and the government will have to bail them out,” Joseph Wang of Bitquant wrote in a blogpost.

So there was a good reason for the steep price decline after the Chinese added this regulation. By banning big payment companies like Alipay from using the virtual currency, China ensured that bitcoin would not become the currency of choice for sales of goods and services, especially in its booming online market.

“Merchant fees in China are lower than in the West, and platforms such as Alipay and WeChat or Tenpay dominate the mobile and non-bank payment market,” Coindesk’s Aiga Gosh writes.

Using bitcoin for real live transactions is an important driver of demand for the virtual currency. If this factor of demand is removed, the price must fall.

However, the Cyberspace Administration of China has recently used softer tones when talking about the currency in October 2015: “Although some people think that bitcoin and its underlying technology, the Blockchain, is not stable, we cannot ignore the revolutionary changes it brought to the financial sector. The new technology has led to the expansion of a distributed payment and settlement mechanism, which will innovate financial transactions.”

So using bitcoin as a payment for goods and services in China has been removed from the equation, at least for the foreseeable future. That means, aside from capital flight, speculation must account for the recent rise in price.

Other assets, especially the stock market (down 18 percent year-to-date), have recently disappointed Chinese traders, who have a reputation to buy anything that is going up in price.

Luria says: “Part of it is pure speculation. Like other assets, bitcoin is one of those.”