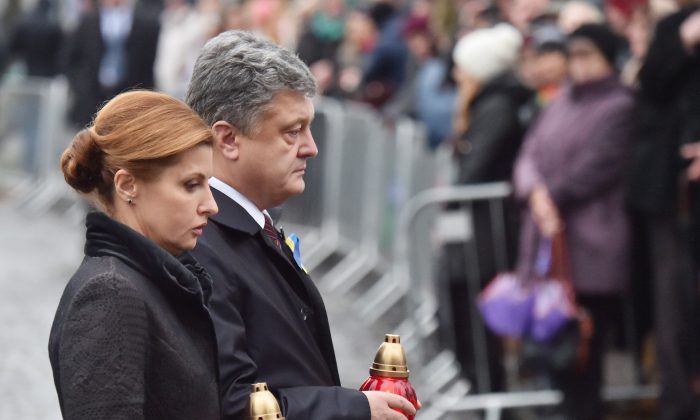 Ukrainian President Petro Poroshenko and his wife Maryna are about to place candles in tribute to Maidan activists who were killed during the Maidan protests in Kyiv on Nov. 21, 2015, as part of a memorial ceremony marking the second anniversary of the beginning of the protests. (Sergei Supinsky/AFP/Getty Images)
Europe

What Is Going On in Ukraine Now?

On the face of it, the conflict in Ukraine seems to have stabilized somewhat. Sporadic shelling aside, the last few months of 2015 saw the “hot” phase of the conflict in eastern Ukraine wind down to a relative calm.

Both parties’ forces have been slowly withdrawing in accordance with the latest ceasefire agreement, and while there were some isolated clashes between the opposing parties over the Christmas period, they haven’t derailed the current plans. Indeed, German Chancellor Angela Merkel remains optimistic about achieving progress in the negotiations.

Meanwhile, Russia’s military attention seems now to be mostly devoted to its military intervention in Syria and the tensions that’s caused with other countries, particularly Turkey.

But it’s easy to forget how serious the situation still is. After all, this conflict has killed more than 9,000 people—and the tension between Ukraine and Russia remains palpable.

The tension between Ukraine and Russia remains palpable.

Ukraine has blamed Russia for recent cyberattacks against a key Ukrainian power company late last month. This comes amid an ongoing feud between Moscow and Kyiv over Ukraine’s outstanding $3 billion Eurobond, which it insists cannot be repaid in full.

Western capitals have continued to place the blame solely on Moscow’s doorstep for destabilizing eastern Ukraine in order to alter the landscape of Europe. Supreme Allied Commander for Europe, General Breedlove, has called this “a 21st-century offensive employing 21st-century tools for strategic deception and calculated ambiguity to achieve Moscow’s political goals.”

Russia’s Foreign Minister, Sergey Lavrov, has declared that “We do not pursue any evil intentions and we are still open for honest conversation.” In comparison, President Putin has been accused of remarking that Russia could take Kyiv in two weeks if it wanted to.

For many observers these contradictions point towards the inherent duplicity in Russia’s behavior, as it seeks to deliver mixed messages in order to facilitate Moscow’s malevolent aims.

Yet with Moscow’s support for the opposition forces coinciding with its engagement in the peace effort, has this signaled a complexity underpinning Russia’s behavior which has not readily been accounted for by Western capitals?

The long-running crisis has fallen into a cycle of escalation and de-escalation, and Moscow’s role in it is as complicated as ever.

The long-running crisis has fallen into a cycle of escalation and de-escalation, and Moscow’s role in it is as complicated as ever.

On the one hand, Moscow has provided support to fighters in the eastern regions since July 2014, whether they be on the offensive or at the brink of defeat. That decision to support the use of force in violation of Ukraine’s sovereignty is fundamentally politically motivated, and to the extent Russia has acknowledged its role, there has been little pretense otherwise.

This is a new low even by the standards of Putin’s past behavior. In the 2008 intervention in South Ossetia, for instance, the Kremlin at least tried to legitimize its policy with reference to international law, instead of sticking to brazen denial and obfuscation—although Putin has recently admitted that military specialists have been involved in eastern Ukraine.

Russia’s response has also been linked to its reservations about the spread of instability. While it may be little more than a useful smokescreen for Russia’s more obstructionist behavior, the Kremlin has made at least some effort to help mitigate the humanitarian crisis.

Russia has continued to participate in the framework of the OSCE’s Special Monitoring Mission to Ukraine (SMM); it’s been a central actor (albeit controversially) in the delivery of humanitarian aid in accordance with the ICRC (International Committee of the Red Cross), has accommodated mass refugee flows, and has agreed alongside other powers in the settlement process to promote post-conflict reconstruction efforts in Ukraine’s eastern regions.

However, there are limits to this acceptance. Moscow continues to refuse to accept the expansion of the SMM’s capacity of observation along the Russian-Ukrainian border. It also consistently opposes the establishment of an international peacekeeping mission, which would inevitably interfere with its military support for the opposition.

Throughout the diplomatic processes in Geneva and Minsk, Moscow doggedly tried to gain as much leverage as it could for the opposition forces. And despite the West’s worry that the Kremlin may obstruct a new settlement to preserve its influence over the region, this has not ruled out a new negotiated settlement—but Russia clearly intends to be a central actor in any such agreement.

Moscow wants a settlement in Ukraine that takes its own interests into consideration. Its preference is evidently for a federation of Ukraine via a compromised solution between Kyiv and the eastern regions.

Moscow’s behavior will always be guided by a complex array of legitimate security interests, guaranteeing involvement in political or security negotiations concerning its immediate regional space. What’s certain is that the Kremlin doesn’t want instability along its border, particularly as Ukraine is a potentially huge economic market for Russia (and not least a customer for Gazprom).

Indeed, Russia has remained alert to the consequences of pushing Ukraine into a new spiral of violence. But this doesn’t mean that the potential for future conflict has been eradicated—or that Ukraine is any less wary of Russia’s intentions.

Lance Spencer Davies is a doctoral researcher in political science and international studies at the University of Birmingham in the U.K. This article was originally published on The Conversation.