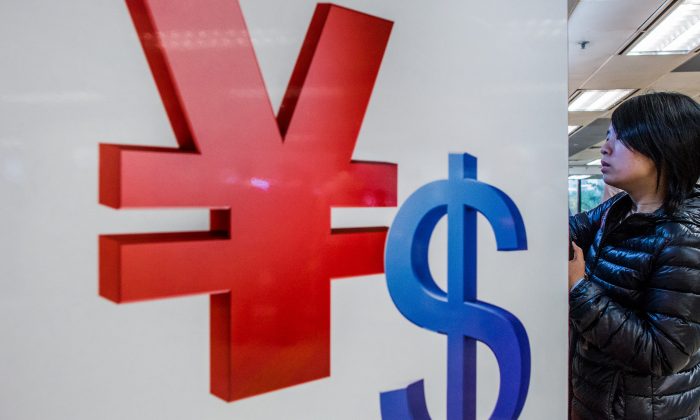 A woman uses an automatic teller machine (ATM) next to Chinese yuan (L) and US dollar symbols in Hong Kong on November 28, 2012.(PHILIPPE LOPEZ/AFP/Getty Images)
News

Portugal, Spain, the Netherlands, France, Britain, and the United States: since the 1400s the club of nations providing the world’s reserve currency has been highly exclusive—and composed entirely of Western powers.

Many think this is soon about to change, with China’s yuan taking over from the dollar. But before even considering the likelihood of this scenario, we should first recap exactly what a reserve currency is.

When countries trade with each other, they exchange currency for goods. If you sell more goods, you get more foreign currency—which at some point ends up on the central bank’s balance sheet as foreign reserves, hence the term “reserve currency.”

It is a reserve because it enables countries to import goods if their own currency suffers a crisis.

The most widely represented currency in this game of reserves is the world’s reserve currency, which is currently the U.S. dollar. It represents 33 percent of global foreign exchange holdings, despite being down markedly since 2000 when it was 55 percent.

Other currencies like the euro, the British pound, the Japanese yen, and the Swiss franc also have reserve status, because people believe they can get something in return for them in the future.

There is another more technical aspect to determining the role of a currency in the world financial system: it is clearing and trading through banks.

When currencies are exchanged, private banks tied to their respective central banks execute the transactions. When people talk about buying and selling foreign exchange they are not referring to coins and notes, but bank deposits and other financial assets.

International banks need to be able to operate in different countries in order to process international transactions. This system again favors Western banks, as European and American banks operate all over the globe and sometimes have direct access to other countries’ central banks.

China has made the greatest push to threaten the viability of the U.S. dollar as a reserve currency on this technical side, but because their financial system has been closed off for decades, they have a lot of catching up to do.

One of the many steps taken over recent years is the establishment of the China Construction Bank as the clearing house (read: foreign exchange trader) for yuan in London. China will likely announce clearing houses for Paris and Luxembourg shortly.

It cannot be denied that China is making progress in this direction, closing many deals and entering agreements to use the yuan as a trade currency, bypassing the dollar. Now, more than 40 central banks use the yuan as a reserve currency among others.

But there are some problems, which for now, China cannot fix. The world’s reserve currency is the go-to currency when it comes to investing the wealth accumulated through trade—a piggy bank for rainy days.

Central banks are extremely conservative investors. They want to preserve value and be able to sell their assets rapidly, in case of an emergency.

Because of U.S. military and economic strength, central banks are generally happy investing in U.S. Treasurys. The principle reason why the U.S. Treasury market is the deepest and most liquid in the world.

China is different. The investment opportunities in China are often risky (bank deposits), illiquid (infrastructure), or both (real estate), and don’t qualify as central bank investments. The government bond market is so small that it would not be able to hold the reserves of even a single medium sized country.

Most crucially, however, world-class financial markets rely on a set of domestic institutions independent of capricious government meddling, and investors demand the rule of law. The United States, despite whatever it has done to undercut trust in its own institutions, is still eons ahead of the People’s Republic of China when it comes to independent regulation, a court system with integrity, and transparency.

The dollar is certainly not as strong as it once was, though. The Federal Reserve’s money printing, the government’s fiscal profligacy, and corruption in the banking system have undermined faith in the U.S. currency.

While for the time being China is a worse choice to the United States as world currency in virtually all respects, there are initiatives to launch a multilateral reserve currency under the tutelage of the International Monetary Fund, which could mitigate some of the weaknesses of a single reserve currency.

So while China’s dream of unilaterally knocking the United States off its perch is unlikely to come to fruition, if America isn’t careful it could join the club of reserve has-beens sooner that it would like.