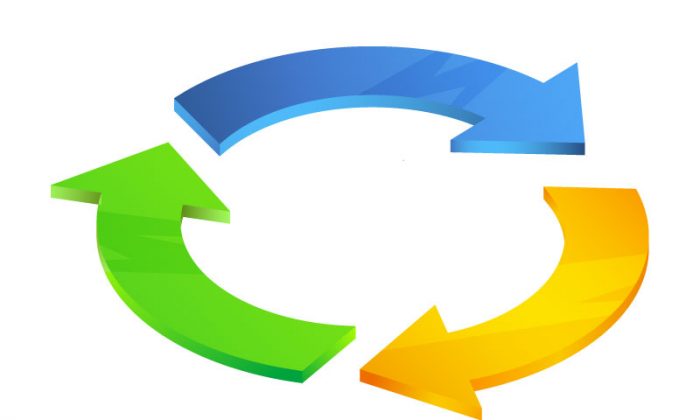 When you outputs become your inputs, that’s a circular economy. (Shutterstock*)
Business & Markets

What Is a Circular Economy?

The concept of the circular economy has left the realm of academic theory and entered the world of business. The price of natural resources and materials is soaring, and in response to volatile markets and increasing competition, developed nations are examining this sort of alternative economic model.

A circular economy is one that exchanges the typical cycle of make, use, dispose in favour of as much re-use and recycling as possible. The longer materials and resources are in use, the more value is extracted from them. This could contribute toward reducing Europe’s dependence on critical materials such as cobalt, fluorspar or gallium, but also reduce overall demand by recovering the resources, nutrients or energy contained in products at the end of their useful life.

Extending the life of products and materials prevents the over-generation of waste and recovers the full value of products. This would create new business opportunities and revenue streams, while minimising the environmental impact of mining, resource extraction, refining and manufacture.

Moving towards a more circular economic model is one of the pillars of the EU 2020 strategy – and within a few weeks of each other the European Commission and a committee of British MPs have released reports on how to bring it about.

The EU proposes to define a headline target of material productivity, a measure of the amount of value generated per unit of raw materials or products. Based on GDP relative to raw material consumption, this would be set at 30% by 2030. The package also includes a legislative proposal to review waste targets which includes targets for 70% recycling of municipal waste, 80% recycling of packaging waste and bans on any landfilling of recyclable goods.

Other measures would boost innovation in resource efficiency, and tackle material intensive sectors, such as construction, with measures to improve the material efficiency of buildings through a harmonised framework for life-cycle assessment of buildings and promotion of secondary markets for construction materials.

From the UK, the Environmental Audit Committee’s report on “ending the throwaway society” calls for an ambitious strategy to lay down the right conditions to transition to a more circular economy.

The committee’s proposals are more radical, suggesting lower VAT for recycled products and repair services to encourage new markets, innovation and better eco-design of products. The report also calls for a recycling regime that would improve on the limitations of the current system of many different, local schemes.

Although all these measures have potential it’s unlikely they are enough to provoke the sort of radical changes in patterns of consumption and production required. From Europe the strategy relies on hefty recycling targets, but the measures to make it easier and more worthwhile to re-use waste to create new products are still missing.

Taxes have proven extremely successful in reducing material waste and in driving demand for secondary, recycled or re-used materials markets. For example, the UK aggregates levy for the construction industry has increased recycling rates of aggregates (sand, gravel, etc) to 25% and boosted the market for recycled aggregates. It has, in other words, made it worthwhile to re-use and not to waste. Run across the entire EU, a similar tax could lead to revenues in the order of €800 billion and hugely reduce material requirements for the building sector.

While talk of implementing a circular economy emphasises the opportunities, there’s little reflection on the costs and challenges of the changes required. It’s true that waste is valuable, but recovering that value is complex and costly. For example, construction waste, the single most important waste stream in the EU, contains metals, minerals, glass and wood, but nonetheless in most cases has negative value – companies have to pay others to take it away. The re-manufacturing sector in the UK has a potential to generate £5.6 billion with the right support, but none of the suggested policies do anything to overcome the barriers it faces.

The entire European package lacks any systemic approach. The emphasis on waste and recycling distracts from the need to address the consumption aspect. Although there is some mention of the need to design products to be more recyclable and re-usable from the start, more work is needed to redesign the whole production and consumption system itself. We need not just products that are more easily and economically recycled but also products that last longer and are better for the environment. We also need the production and consumption infrastructure in which resources are optimised to maintain their value and usefulness over the lifespans of a number of products, at the end of each being recycled into another.

This is no mean feat, and will require measures such as industrial symbiosis, which is aimed at closing the loop by promoting co-operation across different industries where waste streams from one become inputs to another. Or an extended producer responsibility schemes where producers have a duty of custody of the resources contained in a product even after its sale.

Another shortcoming of the package is the lack of reference to commerce and industry that accounts for about a quarter of the EU’s waste. Some organisations are taking the lead, for example the ambitious Marks & Spencer’s Plan A, Unilever’s sustainable living plan, or Sainbury’s recent announcement that one of its stores would “close the loop” by using its own food waste to power the store. But until these outliers become the norm there is much more the EU and national governments could do to encourage them.

Teresa Domenech receives funding from the European Union FP7 programme (www.polfree.eu), and is a Sherpa at the European Resource Efficiency Platform (EREP). This article was originally published on The Conversation. Read the original article.

*Image of “circular arrows” via Shutterstock