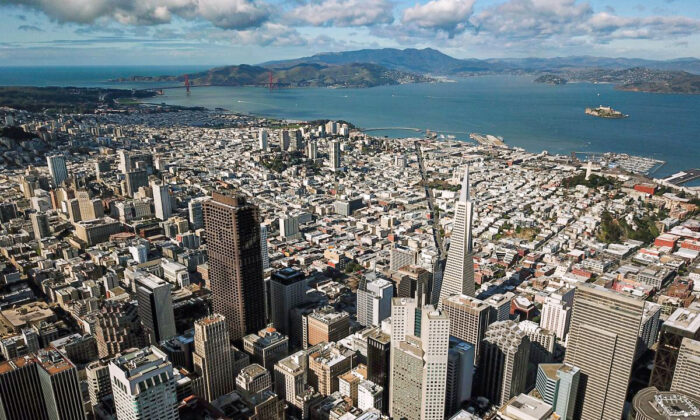 Downtown San Francisco is seen from above on Feb. 6, 2019. (Josh Edelson/AFP/Getty Images)
Viewpoints

What If San Francisco Doesn’t Recover?

San Francisco looks worse now than I’ve ever seen it. Like any major city, San Francisco had bad areas before 2020—those rough areas you knew to avoid—but you could go anywhere else basically unmolested.

Today is something entirely different.

The streets are dirty. Homeless encampments, trash, and excrement can be found all over. Car break-ins are so frequent that it’s basically become a non-government-imposed tax for people who come here. Of course, some areas are much worse than others, but almost all areas of the city are suffering from this decay, and it’s appalling.

Every year, the city seems to find new ways to dig deeper and deeper toward ruin. But what happens to San Francisco if it really doesn’t recover? What if the financial woes, homeless encampments, rising crime, and dwindling police force are the new normal for this once-great city?

Whether or not the politicians want to admit it, San Francisco is in a very precarious situation. Big Tech is gone, and it isn’t coming back. Of course, some companies will keep a building here or there, but tech has realized they can work anywhere. Why would anyone want to put up with onerous San Francisco regulations and taxes? Once you pay this high cost of entry, you still must deal with squalid conditions just to get to work. Instead, why not stay in your pajama bottoms and a nice shirt and fire up the Wi-Fi at home?

The pandemic caused many offices to transition to working from home or some form of hybrid model. Now that many companies and their workers realize working from home can be effective, why wouldn’t these companies keep it permanently? Why continue to pay a premium for San Francisco office space?

If you go downtown during the day, you can see the difference. The office buildings are empty. Vehicle and pedestrian traffic aren’t half of what they used to be. But what other effect does that have on the city?

Well, there are a lot of small businesses on the ground floors of those large buildings. These businesses have survived by servicing all the workers commuting to those buildings. As they start to realize the workers aren’t coming back, they’re forced to accept the new reality and close. The closing of those businesses will be the start of the economic death spiral.

Closed businesses put up boards to secure the storefronts. The closed-up shops lead to more homeless encampments taking over the area. Urban blight and homeless encampments don’t exactly inspire people to risk their savings, open a business, and try to clean up the area. That only exacerbates the problem and makes it increasingly harder to get out of the abyss. The encampments will spread like a virus to cover the entire area.

Tourism Is the City’s Lifeblood

In addition to those issues, the pandemic wrecked tourism, on which San Francisco’s local economy survives. In 2019, tourists spent an estimated $10.3 billion in the city. But today, some hotels are still closed or have been converted into homeless housing. The hotels that have reopened aren’t near their full occupancy. Add that to the constant national stories of San Francisco’s urban decay, and why would anybody want to travel here?

The tourists who are brave enough to come get to experience all the things that aren’t printed on postcards: open drug dealing and drug use on the street, homeless encampments, filthy streets covered in human feces, and the high cost of just about everything.

Even if tourists navigate through all that, they may get to become one of the many victims of our famous auto burglaries, in which they get to replace a rental car window and all of their luggage. That’s not exactly worth paying a premium to experience on a vacation.

Who Will Pay the City’s Bills?

San Francisco had tech and tourism. It doesn’t have some other large industry that pays for city services. Also, its bloated budget is more than $13 billion a year for a city of fewer than 900,000 people. What happens when the money dries up?

It happened last year, until the federal government bailed out the city. As reported in the San Francisco Chronicle in March 2021, the $1.9 trillion COVID relief bill paid off San Francisco’s deficit, allowing the city to avoid “painful cuts” to services.

The article states that the bill “will erase the majority of San Francisco’s projected $650 million budget deficit over the next two years.” So instead of ushering in any sort of fiscal responsibility, the balance sheet goes back to zero and everything is business as usual.

He’s right. What happens when the federal government isn’t there to pay our bills? Running the city like a first-year college student who maxed out their first credit card isn’t sustainable. Mom and Dad won’t always be there to pay off the bill. Eventually, Peter Pan has to grow up.

Hopefully, the city finds a golden goose to lay golden eggs, because without that, there will need to be severe cuts in services on which the city prides itself. Add that to the police staffing crisis, and a “city in decline” may be the softest way to state it.

San Francisco is in dire straits. Whether the powers that be want to admit it, her best days may be behind her. People have asked me, “Do you really think it could all fall apart?”

I’ll leave you with the same parting thought I give them:

When looking at San Francisco right now, does our situation look more like Detroit when the auto industry left? Or is it more like when New York City cleaned itself up in the late ’90s?

Hey, but at least we have good weather.