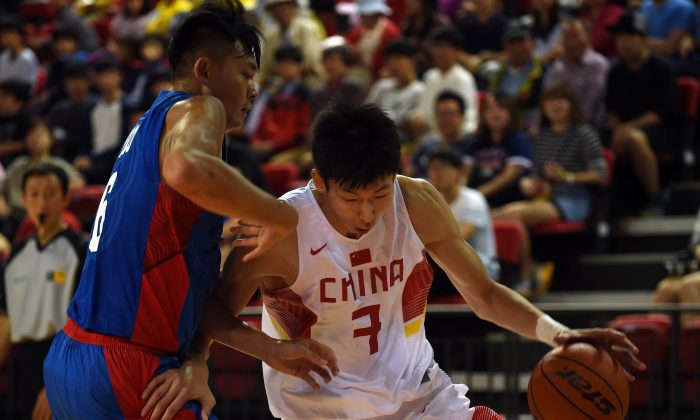 China's Zhou Qi dribbles past Taiwan's Wu Tai Hao during their men's basketball match at the 2014 Asian Games at the Samsan World Gymnasium in Incheon on September 25, 2014. (AFP/Getty Images)
NBA

What If Emmanuel Mudiay Isn’t the Best Prospect Coming Out of China?

Here’s a new idea–a Chinese player, not Emmanuel Mudiay, being the best prospect out of China for the upcoming draft.

Many NBA fans have heard Mudiay’s name thrown around, as he’s projected to be drafted in the top five in the 2015 draft. Mudiay, 19, was set to attend SMU in the United States before ultimately agreeing on a contract in the Chinese Basketball Association.

Mudiay has become the Dante Exum of this year’s draft, a mysterious prospect that involves some risk for the team drafting him. Mudiay only played 12 games in China, due to injury but also due to not playing well when he got healthy again. Then again, he was finally called on in the playoffs, producing a stunning performance that won the game but then producing terribly the next game, which ended in his team’s elimination.

With Mudiay’s worth far from clear, a new player from China–a Chinese player–has been introduced possibly being a better pick than the guard. That would be 7’1″, 19-year-old Zhou Qi

“Zhou’s 72.2 percent shooting is tops in the league, and his block rate (10.8 percent of opponents’ 2-point attempts) is nearly double anyone else. His stats translate to 14.1 points, 7.0 rebounds and 5.3 blocks per 36 minutes in the NBA,” reported Kevin Pelton of ESPN.

“That kind of production would make Zhou a surefire lottery pick, and probably more. Is there any chance he can actually be this good?”

The CBA has its positives and negatives, but most agree it’s hard to gauge players just from games in the weaker league. Yao Ming played well in the NBA but no other Chinese players have done that great, perhaps making executives hesitate before drafting one.

On the other hand, Qi has fantastic size, long arms, excellent hands, and is very mobile for his size, according to Draft Express. He’s a “versatile offensive player” who “shows decent footwork and post moves,” and also “makes turnaround jumpers with soft touch.” His range extends to the 3-point line, and he can attack slower centers from the mid-post.

However, the big knock against Qi is being “extremely frail.” The draft website added: “Lacks the strength or toughness to take advantage of his size consistently inside the paint” and “Has a difficult time finishing when an opponent puts a body on him.”

“I think if there’s an international player not named Kristaps Porzingis or Mario Hezonja who sneaks into the first round, it will be Zhou,” Chad Ford of ESPN noted. “He’s got great size, is very athletic and is extremely skilled. The only question, and it’s a big one, concerns his frame. He’s rail thin. Zhou is going to need to add a lot of strength to keep from getting pushed all over the place in the NBA. If he had a better body, I think he would be a lottery pick”

One possibility for NBA teams exploring Qi–letting him develop for one more year in the CBA. The Philadelphia 76ers did that last season with Dario Saric, who is not expected in the league until 2016-17.

While most other teams besides Philly wouldn’t want to waste a high pick on a draft-and-stash, there are several other teams who might consider it, especially if Qi falls into the late first round or second round. The Denver Nuggets just brought in a second-round foreigner, Joffrey Lauvergne, who they acquired through a trade, and could be willing to draft Qi and wait on him since they are in full rebuilding mode now. The Suns have shown a willingness to play a long game in certain situations. The Hawks will get the Nets lower first-round pick and could be interested in doing a draft and stash since their more focused on bringing in established players and winning now. The Spurs have done several draft and stashes.

Whichever team does take a chance on Qi could very well end up with a star on its hands in the future.

“Zhou might be the perfect draft-and-stash candidate,” Ford said. “Give him a few years and he could be special.”