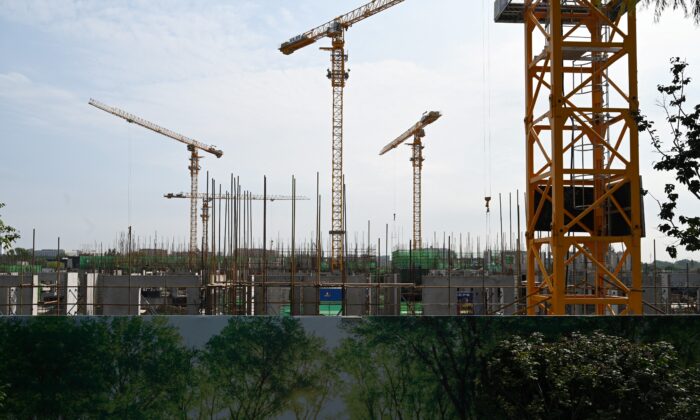 Construction site of an Evergrande housing complex in Beijing on Sept. 13, 2021. (Greg Baker/AFP)
Thinking About China

What If China’s Economy Collapses?

What will be the global strategic impact of the economic decline or collapse of China in the next few years?

Major investors have begun to question the viability of investment in China, after decades of championing investment there.

China’s economic decline has been underway for more than a decade. Chinese Communist Party (CCP) leader Xi Jinping recognizes this, and knows he has to manage the decline by suppressing those in China who have grown accustomed to wealth and freedom.

A reversion to Maoist “internal circulation” economics is likely to be presented to the 20th CCP Party Congress in October 2022 as irreversible and necessary. Xi is already presenting himself as the only leader capable of managing the “controlled implosion” of China, and return to Maoist isolationism. He must portray himself as a robust leader who challenges the Party’s enemies.

So what are the ramifications of the collapse or decline of China’s economy?

This has received little consideration by foreign governments. Instead, there has been a religious belief in the unrealistic claims of Chinese economic growth, and an avoidance of contingency planning to cope with a Chinese collapse.

Much will depend on how China’s economic declines. Will it implode at great speed, or will it be managed to ensure stability within the People’s Republic of China (PRC)? Will there be a sudden break-point when the PRC reverts to a Maoist state?

PRC demand for many raw materials has fallen away.

Iron ore prices peaked in early 2021 because there has been a collapse in China’s demand for steel (and therefore iron ore), and a concurrent worldwide oversupply in the steel market.

Pretense that declining PRC demand for minerals was temporary does not address the reality that Xi has begun shutting down much of China’s private sector in ways that make it difficult to revive.

Suggestions that China would reduce iron ore imports from Australia—its biggest supplier—as punishment of the Australian government for taking an “anti-PRC line” are Beijing’s tactics to disguise declining demand. Other suppliers, such as Brazil, will also see a decline in demand. The massive Chinese project to develop iron ore deposits in Guinea, West Africa, seems likely to fade away.

China attempted to portray a “rapid recovery” from the 2020 COVID-19 crisis by ramping up domestic industrial production. That pretense is now over. Chinese investment in Australia—some $13 billion in 2016—plunged to well under $1 billion in 2020. By 2019, iron ore made up almost a quarter of Australia’s total exports, 81.7 percent of which went to China. By 2021, the decline in Chinese demand for all Australian exports had become stark. Beijing’s funds for the Belt and Road Initiative (BRI, also known as “One Belt, One Road”) have been minimal for some years.

Australia and Brazil are unlikely to find replacement markets for their mineral exports before China’s market collapses. This means they will go into rapid economic recession.

The United States is likely to see some buffering in the economic decline of the PRC because of China’s urgent need for food produced in America, and which the PRC cannot source elsewhere in sufficient quantities. The U.S. aerospace industry (particularly Boeing) had become dependent on China. Boeing was seen as one of the apologists for Beijing.

But the Chinese market for U.S.-made transport aircraft was declining anyway.

But every country has become dependent on trade with China, so a collapse in the PRC would precipitate a global economic recession, at a time when the world has not yet recovered from the economic damage caused by COVID-19 shutdowns.

Xi’s priority is to manage the decline of China’s economy—and therefore its internal and external security—in a way that he retains control of the CCP and the CCP retains control of China. All other considerations are secondary, including whether or not the PRC remains “wealthy.”

Xi must project confidence and dominance during a period of loss for every person in China. So Xi’s bluster and threats escalate, but are staged to avoid military conflict. Xi must avoid direct conflict at all cost, while pursuing brinkmanship to the most aggressive level.

This is unavoidable if Xi is to dominate the Party Congress of October 2022.

The real “China threat” to the world comes more from its economic collapse than from a major hot war.