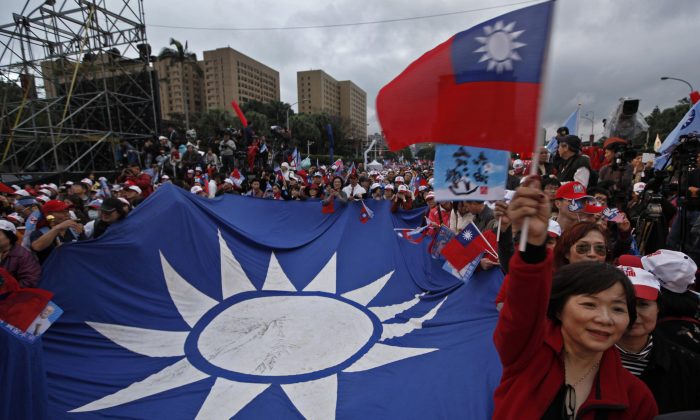 Chan Koon-chung, the renowned Hong Kong-born author residing in Beijing, has recently published his latest novel, an alternate history narrative, which explores what modern China would be like if the Communist Party never came to power.

Titled “The Second Year of Jianfeng: A Uchronia of the New China,” the novel’s publication was marked with a book launch in Hong Kong on Sept. 25. Chan’s previous work, the dystopian novel “The Fat Years,” remains unpublished in mainland China.

“Uchronia,” drawing from the etymology of “utopia,” is a word describing an alternate or postulated reality.

Chan’s novel posits a Nationalist Party victory in the Chinese civil war, which followed on the heels of World War II and in our reality ended in communist occupation of mainland China in 1949.

From there, the novel builds a parallel history of China under the Nationalist leader Chiang Kai-shek. Writing from the perspective of people of multiple social and geographical backgrounds, Chan weaves a three-decade description of the alternate “New China” up to the end of the 1970s.

The scenario is one that has been gaining interest, even internationally, as China modernizes and gains in global relevance—and the drawbacks of its peculiar configuration of nationalism, Leninism, and singular attitude to the rule of law begin to be more acutely felt. Earlier this year, The Economist ran a speculative piece for those wondering how China might look were it not for the brutal and inefficient totalitarian policies executed by founding communist leader Mao Zedong.

Chan believes that a China integrated with foreign markets would have had greater opportunities for economic prosperity and social progress much sooner.

“By 1979, China could have been very rich, at least it would have been so in the cities, due to exports, cheap labor, and light industry along the coastal regions,” Chan said in an interview with the Hong Kong media Initium.

The economic boom experienced by Japan, and other East Asian nations would have been less robust, as their places were taken by Chinese coastal cities such as Shanghai, Tianjin, or Guangzhou.

Hong Kong remains an ordinary port of little note other than its status as a British colony, through which easy trade of foreign goods promotes development in the nearby province of Guangdong.

“Even the Olympics would have been held in Nanjing,” Chan said. Nanjing, which served as Chiang Kai-shek’s capital before and after World War II, is still the seat of the Republican government in Chan’s novel.

Beijing, which literally means “The Northern Capital,” retains its Republican-era name “Beiping,” or “Northern Peace.” Tiananmen Square, which in our history underwent a massive expansion under the vision of Chairman Mao, would remain smaller.

The novel’s title “The Second Year of Jianfeng” refers to the onset of rule by Chiang Kai-shek’s son Chiang Ching-kuo, who adopts the courtesy name “Jianfeng.” (In our history, Chiang Kai-shek also has a courtesy name, Zhongzheng). In Chan’s book, as in real life, the elder Chiang passes away in 1975, and his son is “elected” president by the 1,200-member National Assembly.

The second part of the book includes seven chapters from the perspectives of individual characters.

Nationalist China’s triumph over the Communist Party comes in April 1946, when Gen. Sun Liren, known to his American allies as “Rommel of the East,” destroys the armies of opposing commander Lin Biao in Manchuria, where the communists had been consolidating their military and logistical base with Soviet assistance.

Chan’s alternate history also brings out the tragic loss of literary talent that China faced when the communists came to power, as he explores the unrealized potential of writers that was snuffed out due to the destructive political atmosphere. Some of his characters are Chinese writers who did exist historically, but were consigned to obscurity.

“I wrote about the first and second generation of writers. These names are all the names of real people, even though they may not be known widely,” Chan told Initium.

The Beijing author Lao She, who was driven to suicide in Mao Zedong’s Cultural Revolution, wouldn’t have faced political struggle under the Nationalists. Chan has him pen a million words instead of the mere 80,000 he dared write in our timeline. He and another well-known Chinese writer, Lin Yutang, end up Nobel Prize laureates.

Shen Congwen, a noted novelist who was severely persecuted by the communists, is another author who gets a break in Chan’s new China. While a mental breakdown and other trauma caused by the communists’ political campaigns reduced Shen to a man who would never write again, the alternate history has him pen the book “Survivor,” a masterpiece comparable to our universe’s “One Hundred Years of Solitude.”

“You have serious academic work to novels,” Chan said, describing the literature of his alternate homeland. “In a peaceful and prosperous China, these people could have produced good work.”

On the other hand, Chan chooses not to include the leftist writers who in our history became household names in mainland China. In his Nationalist victory scenario, these individuals escaped to the Soviet Union along with the surviving communist forces, who were given refuge in Crimea.

This appears to be a parallel to our timeline, which saw the retreat of Chiang Kai-shek’s Nationalist party to Taiwan. It is also a possible homage to “The Island of Crimea,” a novel written by Soviet author Vasily Aksyonov. While Crimea is in fact a peninsula, Aksyonov’s uchronia imagines the landmass detached entirely from the European continent. In this book, the White Russian government that fought Lenin’s Bolsheviks survives on the “island,” developing in isolation from the communist Russian mainland. “It should have been published long ago in Taiwan, but it hasn’t,” Chan said.

Of note is Chan’s character Zhang Dongsu, a liberal scholar from Hong Kong living in Beijing. He is an obscure historical figure in our reality. In a self-referential twist, Chan has Zhang envision how China would have turned out had the communists indeed been victorious. The work is called “Killing a Hundred Flowers After I Bloom: What If the Communist Party Ruled China?” and echoes the real-life communist “Hundred Flowers” campaign of the 1950s in which Chairman Mao encouraged intellectuals to openly criticize the Communist Party, only to mercilessly persecute them after they bared their true thoughts.

Despite economic progress and cultural moderation, the Nationalists aren’t all roses. Chan makes it clear that, as was the case in our history’s Taiwan, republican China after World War II is still an authoritarian state that suppresses democratic voices.

Whether or not this China will liberalize and democratize, as Taiwan did in real life, is not explored in the narrative. Chan scoured diaries and records pertaining to the lives and activities of major Nationalist officials and statesmen, including Chiang Ching-kuo, Chiang Kai-shek’s son and successor.

Chan notes in his interview with Initium that the younger Chiang’s diaries stop after 1979, so the motivations informing his real-life policy that eventually brought democracy to Taiwan cannot be easily divined.

“Luckily, I didn’t have to cover that part,” Chan said.

The political cliffhanger is a dilemma that faces the ruling Communist Party of our own time: Can the Jianfeng president allow the primacy of his political party to take a back seat to the needs of the country?