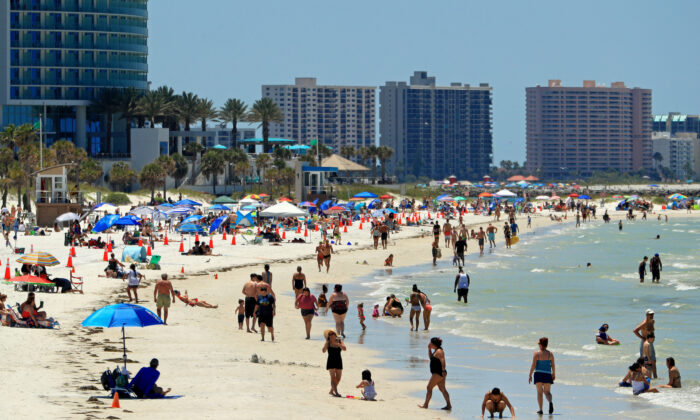 People visit Clearwater Beach after Governor Ron DeSantis opened the beaches at 7am, in Clearwater, Fla., on May 4, 2020. (Mike Ehrmann/Getty Images)
Viewpoints

What Have We Learned After 2 Years of COVID: Lockdowns Don’t Work

Last week, University of Chicago economist Casey Mulligan, COVID expert Phil Kerpen, and I released a study in the National Bureau of Economic Research that graded the states on their COVID performance. The study’s findings have spread throughout the country at warp speed. The Wall Street Journal, Fox News, New York Post, Daily Mail, and even media in Europe and Japan have picked up the findings.

We examine three metrics: health of the citizens and death rate from COVID, the economic performance of the state, and days of school lost to children.

The conclusion was that those states that locked down their economies and schools for the longest periods of time ranked worst, because lockdown mandates were only marginally effective at reducing deaths, but they did severe damage to children. States such as Utah, Montana, and Florida had minimal lockdowns so their economies remained vibrant with persistently low unemployment. The schools remained mostly open in these states.

Here are the top states and bottom states:

As you may imagine, the pushback has been high in volume, but feeble in persuasion. Our favorite came from the Soros group Media Matters, which couldn’t come up with a coherent argument, except that we are “right-leaning.”

But the California and Florida comparison speaks volumes about what did and didn’t work. California had harsh lockdowns for many many months, while Florida had relatively few government orders on COVID. California wrecked its economy with bankruptcies and long unemployment lines; Florida remained mostly open as life went on as usual with beaches, schools, and restaurants closed.

Yet, California and Florida had roughly the same death rate when adjusting for the age of the population. So it is NOT true, as California Gov. Gavin Newsom says, that “lockdowns saved thousands of lives in California.”

It’s clear to us from the chorus of indignation that the left has every intention to lock down schools, businesses, restaurants, parks, and churches AGAIN at their first next opportunity.

We suspect, and this is NOT based on science, that Democrats and socialists just like being miserable and they think it is “fair” that everyone should be equally miserable. Remember the indignation from the left when Florida Gov. Ron DeSantis opened the beaches and restaurants.

Those who STILL think that lockdowns keep us safe and healthy need to explain the near-zero correlation between lockdown severity and death rates in the 50 states. I’ve been waiting for two years for such an explanation.