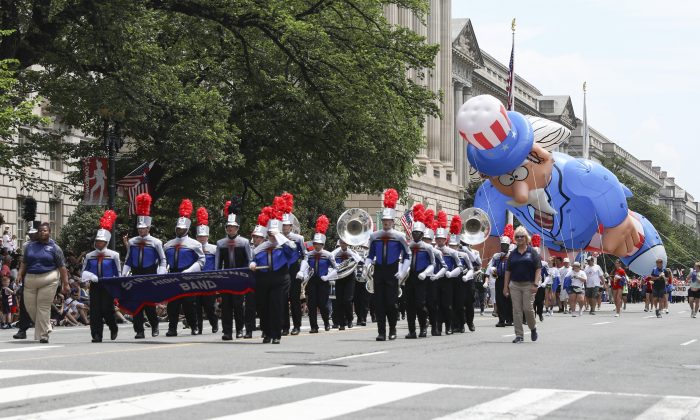 The Fourth of July parade in Washington, on July 4, 2019. (Charlotte Cuthbertson/The Epoch Times)
Thinking About China

What Have Fourth of July Shortages Got to Do With China?

As Bloomberg recently reported, “the skies over a scattering of Western U.S. cities will stay dark for the third consecutive Fourth of July.”

Unlike the celebrations (or lack thereof) of 2020 and 2021, which were directly impacted by COVID-19, 2022’s celebrations will suffer because of a shortage of fireworks.

Fourth of July is when family and friends gather to celebrate the country’s independence. They gather around the barbeque, enjoy some good food, and finish the evening with a firework display.

In Phoenix, however, according to local authorities, “Fabulous Phoenix Fourth, Light Up the Sky at the American Family Fields and After Dark in the Park will all be canceled this year due to supply chain issues affecting access to fireworks.” Phoenix is not alone. The Arizonian cities of Tempe and Chandler won’t have firework displays either.

Meanwhile, in College Park, Maryland, city officials recently announced they “can’t guarantee the usual 4th of July show” due to a lack of supplies. One of those supplies happens to be fireworks.

Americans are united by their love of fireworks. In 2019, for example, Americans spent a total of $1 billion on these minor explosives. Where do the fireworks come from? Well, like so many other products, they come from China. The United States’ number one competitor produces 90 percent of the world’s fireworks.

To be even more specific, as Julie Heckman, executive director of the American Pyrotechnics Association, told NPR: “Ninety-nine percent of the backyard consumer fireworks come directly from China,” and “70 percent of the professional display fireworks” are manufactured in major cities like Beijing, Shanghai, and Shenzhen.

There was a time, as the NPR piece noted, when a majority of the fireworks used by Americans were made by U.S. companies. Sadly, those days are gone, long gone. The firework shortage is a symptom of a much deeper, far more serious issue.

Walter Block, a well-respected American economist, recently noted that besides the shortage of fireworks, the United States is also running low on aluminum, avocados, bicycles, canned vegetables, chlorine, Christmas trees, computer chips, infant formula, peanut butter, and toilet paper. I could go on. No, really, I could. But you get the point.

Although the war in Ukraine is certainly playing a role in the shortages, it’s not enough to explain why the United States is in such a desperate way. As Block noted, Americans have experienced war before. They’ve also experienced “pestilence, disease, bad weather” and government regulations before.

However, not since the end of World War Two has massive shortages “disrupted the economy to anything like the degree we are presently experiencing,” he wrote. Ukraine is just one piece of a larger, perplexing puzzle.

Let’s take some products from Block’s rather extensive list. What country produces the most bicycles?

You guessed it, China.

The communist nation also produces more computer chips (one of the items in short supply) than the United States. China is also the world’s largest producer of toilet paper. Americans consume the most amount of peanut butter in the world—approximately 7 pounds of creamy and crunchy goodness per person each year—but China is the world’s largest producer of peanuts. Although it’s still possible to have Fourth of July celebrations without fireworks, it’s impossible to have peanut butter without peanuts.

What’s my point? The United States used to be the king of self-sufficiency. There was a time when important products were made in America. Again, though, those days are gone. In all likelihood, they’re never coming back. That’s because, today, China is the world’s manufacturing superpower, and the United States is its number one customer.

In fact, of all the 195 countries in the world, the United States is now the top importer of goods. Even in relatively stable times, there’s a lot to be said for self-sufficiency. In times of genuine crises, however—with the ongoing war, fears of a global recession, etc.—self-sufficiency is an absolute must.

Dependency breeds desperation and dependency on an arch rival breeds existential dread. China has become the world’s supermarket, and the United States is now its top customer.