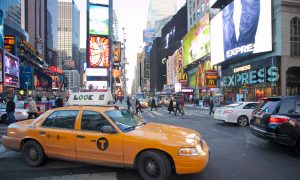 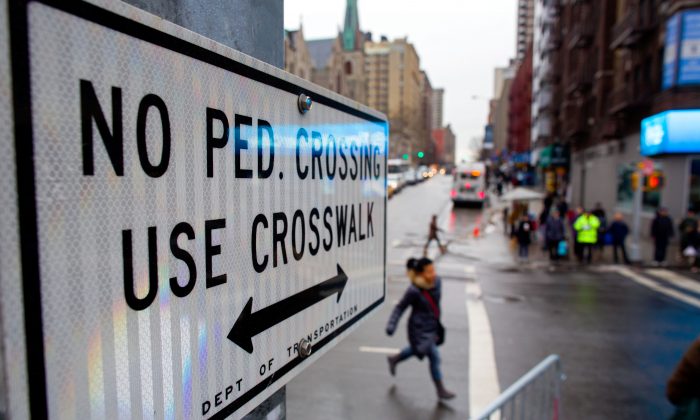 After crossing outside a crosswalk, a pedestrian runs toward a crosswalk at the busy intersection of W. 96th Street and Broadway in the Upper West Side of New York, Jan. 27, 2014. (Craig Ruttle/AP)
New York

What Has Your Councilmember Done for Safe Streets? See the Vision Zero Report Card

With mayor Bill de Blasio’s focus on reducing traffic fatalities to zero in the next decade, City Hall has made an unprecedented push for street safety in just the last six months. Council members are giving out free bike helmets, sponsoring bus countdown clocks, and pushing for street redesigns in addition to sponsoring legislation.

Advocacy group Transportation Alternatives put together a half-year report card rating council members on the number of traffic safety bills they sponsored, and other safe streets work. So far 15 Vision Zero bills and resolutions have been signed into law, many going into effect this fall.

“Lawmakers across the city are taking street safety seriously in a way that we’ve never seen before,” stated Paul Steely White, TA executive director. “Under the leadership of Council Speaker Melissa Mark-Viverito, the Council has tackled an impressive array of transportation issues and has shown a commitment to saving lives on our streets.”

Transportation committee chair Ydanis Rodriguez has held 10 hearings on dozens of bills already, tackling the topic of Vision Zero jointly with Public Safety Committee chair Vanessa Gibson soon after the mayor’s initial announcement. Among them were resolutions calling on state legislature to lower the city-wide speed limit to 25 mph and harsher punishments for drivers who hit and kill on the road.

Council members Jimmy Van Bramer and Stephen Levin sponsored 14 transportation-related bills, the most of any of the council members.

There are 12 council members working to get slow zones in their neighborhoods and 30 working to bring traffic calming measures and street redesigns to their districts.

Nearly half of the council members, 24 of them, have co-hosted Vision Zero town halls. Six are working with their local precincts on Vision Zero efforts (TA previously scored each precinct), 10 are working to expand the city’s bike network, and 26 support better bus service measures like Bus Rapid Transit.

There remains much to be done if they city is going to reach zero traffic deaths, according to the report.

Major thoroughfares like Atlantic Avenue, which accounts for a high percentage of pedestrian and cyclist deaths, have had lowered speed limits and traffic light re-engineering this year, but the report recommends more redesign elements to calm traffic.

The recently passed 25 mph speed limit will also require more enforcement in its implementation, according to the report.