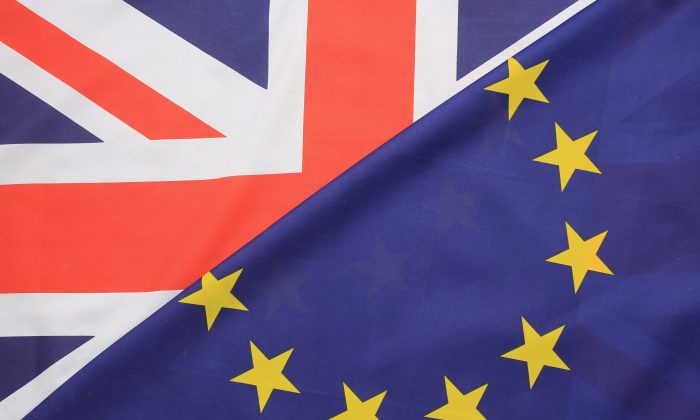 A photo illustration of the European Union and the United Kingdom flags together in Knutsford, U.K., on on March 17, 2016. (Christopher Furlong/Getty Images)
Opinion

Oh and just the small matter of how free movement of labor has benefited millions, as have portable pensions and access to health care. Not bad for the yearly cost of just 260 pounds ($378.85) a household.

For 60 years, the E.U. has been the foundation of peace between European neighbors after centuries of bloodshed. It has assisted the political, social, and economic transformation of 14 former dictatorships. This union is now facing significant upheaval, along with a possible decline in the perks we have had as a member state for the past 43 years.

Among some of the biggest changes brought by E.U. membership is environmental legislation—which was heavily resisted by U.K. governments. We now have clean beaches and rivers populated by fish and even otters in every county in England. The union has the strongest wildlife protection in the world and has enhanced animal welfare in food production—but Brexit could put all this at risk.

The E.U. has restricted waste removal to landfill and promoted a recycling culture. It has introduced anti-trust laws that reduce monopolization and has brought cheaper goods and services including air travel and telephony.

Single market competition has also brought quality improvements and better industrial performance, with no paperwork or customs for exports throughout the European Economic Area.

Although the U.K. hasn’t adopted the euro, it has given us price transparency and the removal of commission on currency exchange throughout the eurozone. Citizens have freedom to travel, live, and work across Europe.

International security has also been enhanced with the European arrest warrant—by Europol—and by cross-border policing to combat human trafficking, arms and drug smuggling, as well as counterterrorism intelligence.

European civil and military cooperation in Europe and Africa has delivered material benefits to millions in post-conflict regions, and the E.U. Common Security and Defense Policy is further engaged in combating piracy off Somalia and in humanitarian rescue operations in the Mediterranean.

The union has also supported democracy and human rights across Europe and beyond, while E.U.-sponsored investment has contributed to better living standards and boosted educational, social, and cultural capital here at home and throughout the continent.

When it comes to trade ties, we all know the union is our major trading partner, both for imports and exports. Our trade deficit will remain even if post-Brexit we stop buying goods from the E.U. and import from elsewhere—probably at much higher cost.

This would end up costing us more not less. The renegotiation of hundreds of bilateral trade deals would also be a complex and time-consuming process which Brexit campaigners dismiss all too lightly.

Having left the E.U., if we still want to trade with the single European market we will still pay into the E.U. budget. And not much less than we currently contribute, just as Norway and Switzerland now pay.

We will also still be obliged to have open borders allowing free movement of labor, because this is a basic principle of the four freedoms that underpin the single European market: the free movement of goods, services, people, and capital.

Britain’s ‘Out’ Campaigners Mistrust the EU, and Each Other

Outside the E.U. there will be no option but to apply E.U. environmental and single market law in its entirety. But we will have no voice in the European Commission, the European Council, or the European Parliament where laws are made.

On top of this, we would lose agricultural and structural funding that has benefited areas of industrial decline throughout the U.K. regions.

So what has the E.U. ever done for us? A whole lot it would seem. We face a critical choice on June 23. Purely from a position of self-interest, we risk losing the advantages that membership brings, and undermine all that the U.K. has contributed to Europe—not least the single market itself.

Worse still, Brexit could inflict severe damage on the European Union. We in Britain would not escape the consequences of its disintegration. It is surely in the U.K.’s interests to commit to an E.U. future. Only from within can we assist the union’s democratic renewal.

Simon Sweeney is a senior lecturer in international political economy and business at the University of York in the U.K. This article was originally published on The Conversation.