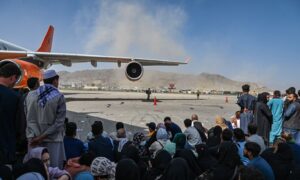 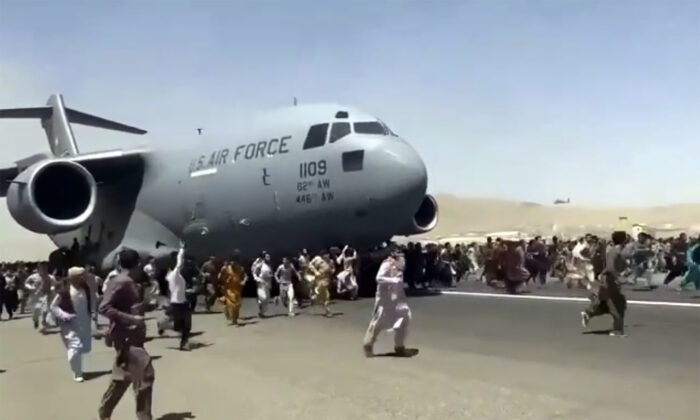 Hundreds of people run alongside a U.S. Air Force C-17 transport plane as it moves down a runway of the international airport, in Kabul, Afghanistan, on Aug. 16. 2021. (Verified UGC via AP)
Viewpoints

George Orwell wrote, “The quickest way of ending a war is to lose it.” The Biden administration tried that idea on for size in Afghanistan.

But here’s the problem: Losing a war rarely means you put the unpleasantness behind you and move on to things you’d rather deal with. Instead, lose a war and you just might end up with other and bigger problems, and maybe other wars.

All eyes are glued on Afghanistan and the sudden collapse of the government and its forces—and the frantic American “bug out.” Recriminations and blame-shifting have started and will continue. But it’s worth a look at what’s coming next, and not just in Afghanistan. The ripple effects will be worldwide and are worrisome.

We’ve seen this before. When America appears weak, confused, distracted, and at its own throat, only bad things happen. Consider some of the things that happened after South Vietnam fell to communist North Vietnamese forces in 1975—while the United States stood by with eyes primly averted while tens of thousands were executed, hundreds of thousands tossed into prison camps, and the “boat people” exodus led to immense suffering and dying.

The blow to American prestige and reliability was grievous and it encouraged America’s enemies—led by the Soviet Union, but also extending to various terror groups—to move on a number of fronts:

Current Secretary of State Antony Blinken says of the fall of Kabul, “This is not Saigon.” But he appears to have another “Saigon” in mind. Few people agree with him.

So What’s Coming Now That Kabul Has Fallen?

It will, of course, be bad enough in Afghanistan. The United States recently flew a rainbow flag at the Kabul Embassy to demonstrate progressive street credentials. It’ll now be the Taliban flag. The Taliban flag will also flutter over the soccer stadiums where attendance is mandatory to watch the stonings of those who helped the Americans, as well as members of “rainbow” communities who were foolhardy enough to trust U.S. Embassy-funded programs that told them to “live their truth,” making them easier for the Taliban to find and kill.

But it won’t stop there. This time, it will be primarily Beijing, rather than Moscow, who will be stoking and spreading the fires designed to torch democracies and expand its hegemony. Some likely outcomes:

Others will be using the opening to their advantage (and the U.S. disadvantage) as well.

Russia will step up pressure on the Baltic states and Ukraine, while also blackmailing the Europeans. And they’ll cooperate with the Chinese, and vice versa, to keep the Americans back-footed.

Iran? It will cause trouble in the Middle East without the restraint of the Trump years.

And expect to hear more from Islamic terrorism in the Middle East and beyond. The fall of Kabul was a huge boost for jihadists worldwide—outdoing Donald Trump’s finishing off ISIS.

As for U.S. partners and allies, what country anywhere is going to believe U.S. promises? Instead, in the case of Japan and maybe South Korea and Taiwan, they’ll be dusting off nuclear weapons blueprints. In other places, especially if close to China, governments will be looking to not provoke China and even lean toward Beijing.

The South Korean leftist regime will be secretly pleased that it was right all along about the Americans—and become more difficult to deal with. President Moon Jae-in said he was “euphoric” on hearing America lost in Vietnam. He must be equally delighted now.

Nobody knows exactly what’s coming, but something is. America and the free world’s enemies smell blood—or weakness—and will push.

One hopes America is ready. But the Biden administration hasn’t shown much backbone or competence. And the Chinese are acting already as if they feel they aren’t the least bit intimidated. They claimed they “mopped the floor” with Assistant Secretary of State Wendy Sherman and lambasted Blinken and Jake Sullivan (and Kurt Campbell) in Alaska. It will only get worse now.

Especially as one big difference from post-Vietnam is that the U.S. financial and business classes will fund the CCP’s overseas activities and military buildup. They never did that for the Russians.

So will the U.S. military’s ruling class save the day?

The United States has just lost the last two major regional contingencies—despite overwhelming airpower, plenty of excellent troops, and unlimited support from the public and the public treasury. And they were led by an entire generation of officers that designed Joint Service Campaigns unrestrained by civilian meddling (no possible “stab in the back” blame nonsense), and then decorated themselves with campaign awards and ribbons.

And this is despite losing the Afghan campaign for hearts and minds to an irregular force with a 12th-century view of human rights, no belief in democratic government, and supported with safe harbor and only minimal funding provided by the intelligence service of a third-world government.

Sadly typical of such commanders was one three-star who served two tours in Afghanistan and then served as U.S. ambassador in Kabul and once boasted that he would be known as the “father of the Afghan military.” Really.

As for the Navy, who are today’s Nimitz, Burke, Spruance, and Halsey? If they exist, they are well hidden. The new Navy secretary said his four top priorities are: China, Climate, Culture, and COVID. He’s right on the first one, but the other three have nothing to do with beating China or anyone else.

And these are the people that are going to take on America’s enemies who are flush with confidence and momentum?

China, Russia, and other adversaries may reckon, however, that if they wait a while, it will get even easier as the Biden administration dismantles—intentionally or otherwise—America’s defenses, debases the currency, and turns Americans against Americans.

These are perilous times, and America had better wake up fast. We will pay for what happened in Afghanistan. We’ve seen this before.