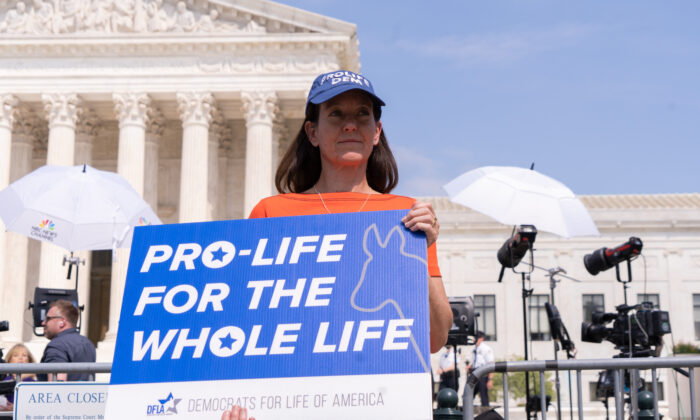 What Happens If Roe v. Wade Is Overturned?

An overturning of Roe v. Wade won’t come close to ending legal abortion in the United States, but rather, a flurry of legal wrangling at the state level is all but certain to follow the ruling’s expected rollback, longtime observers of the battles over abortion in the United States say. This will lead to numerous contrasting and opposing laws and regulations in different states, they say.

The leak of a draft opinion on the case of Dobbs v. Jackson Women’s Health Organization published by Politico on May 2 caught many people off guard, caused censure from both sides of the political spectrum, and kicked off a flurry of statements by federal and state politicians looking to get ahead of an expected overturning of the seminal 1973 precedent that wrested the regulation of abortion from the states and made the procedure lawful throughout the entire United States.d

In the 67-page leaked majority opinion, its author, Justice Samuel Alito, calls Roe v. Wade “egregiously wrong from the start” and says, “It is time to heed the Constitution and return the issue of abortion to the people’s elected representatives.”

In addition to Roe, the justice calls for overturning Planned Parenthood v. Casey, a 1992 ruling upholding the earlier one. That case held that states couldn’t impose significant restrictions on abortion before a fetus becomes viable for life outside the womb, somewhere around the 24-week gestation mark.

For all the shock engendered by the leak of the Dobbs opinion, it’s consistent with the pro-states’ rights position articulated in recent hearings on the issues at the heart of this case. The case concerns the validity of a Mississippi law that greatly restricts abortions at 15 weeks.

“If you listened to the oral arguments and read the briefings, it would not surprise you that this is the kind of opinion that would come out of it. It was aligned with the case that the state of Mississippi made when they asked for Roe v. Wade to be overturned,” said Katie Glenn, government affairs counsel at Americans United for Life.

The Autonomy of States

Glenn offered a number of thoughts on the likely consequences of the Dobbs decision passing into law in its current form or something quite close. In Glenn’s view, the final ruling is likely to acknowledge the validity of Mississippi’s contention that Roe and Casey were wrongly decided and that nothing in the Constitution or the 14th Amendment, which has been used to uphold legal abortion, mentions or alludes to abortion.

“What Mississippi argued is that abortion is not in the Constitution, and if it’s not, then it is a state issue and it should be regulated, like other health and safety issues, at the state level,” she said.

Some states have already laid the legal groundwork preparing for the turning of decisions back over to them about whether and how to regulate or restrict abortion, she noted. They’ve held ballot initiatives leading to the implementation of a trigger law providing that an overturn of Roe would cause the law to kick in, forbidding abortion. One example is Wyoming, where Glenn expects to see officials outlaw abortion as soon as the Dobbs ruling frees their hand to do so.

In other states, attorneys general will quickly head to court at the state and federal levels to seek to have laws applied relating to parental consent, prenatal nondiscrimination, and the banning of abortion on the grounds of prenatal diagnoses, Glenn predicts.

“We will see attorneys general arguing to let those laws take effect, and so I think there will be waves of different laws being reevaluated in the federal courts,” she said.

The legal actions and challenges will play out in highly dissimilar ways given the differing laws on the books in different states. In Florida, where Glenn resides, a law on the books since the 1980s says that abortion is legal in the state, she noted. She expects to see that law challenged in the state Supreme Court.

According to figures from the Family Research Council, 18 states are set to protect life at conception, in accordance with their own laws, once Roe is overturned. An additional four states will protect life when a heartbeat is detected. California, New York, and 18 other states won’t protect unborn life.

While some have long considered abortion law to be essentially settled since Roe, Glenn, on the contrary, views the jurisprudence around this issue as having been in flux for many years, and the likely outcome of Dobbs is the latest stage in a long process.

“The standard has shifted over the years. Even in Planned Parenthood v. Casey, the court changed its stance substantially from Roe when they talked about autonomy,” she said.

Matt Forys, chief of staff at the Leesburg, Virginia-based Landmark Legal Foundation, sees both external factors and the evolution of the Supreme Court’s reasoning as decisive here.

“What has changed since Roe? First, as technology has progressed, the viability of the fetus or child, a focus of Roe and Casey, is earlier and earlier,” he said. “Secondly, in practice, the court has found the Casey framework unwieldy to apply over time.”

A third and no less critical factor is the change in the composition of the court, as the number of appointees sympathetic to “pro-choice” arguments has dwindled, he observed.

Concurring with Glenn, Forys said that an overturn of Roe wouldn’t mean abortion is automatically banned across all 50 states. Rather, states would use their own discretion in regulating abortion. Bans already on the books and trigger laws would come into play.

“We’ll see a flurry of activity in state legislatures for the rest of the year, whether in special session or regular session, as they address this issue anew,” he said.

The road won’t be easy for either side in the continuing controversy. Pro-choice states are not in holding patterns. Rather, they’ve already taken action to become abortion sanctuaries, Forys said, noting that California is already considering amending its state constitution to guarantee legal abortion.

California Gov. Gavin Newsom is also on record as having vowed to make California a safe haven for any women who can’t legally get abortions in other states in the aftermath of the coming ruling. At a news conference on May 4 at Planned Parenthood’s Los Angeles office, Newsom sharply criticized the rollback as a repressive measure of a kind that had “never happened before in our lifetimes.”

In an America with so many contrasting and conflicting state laws, frequent and protracted litigation looks hard to avoid.

“The next important chapter in the legal story of abortion is going to involve how the state laws interact with each other. A pro-life state allowing private parties to sue abortion providers could be thwarted by a pro-choice state that allows those private parties to countersue. And the pro-choice states could block out-of-state attempts to investigate or extradite their abortion providers,” Forys said.

Glenn said she expects the well-funded abortion industry to be highly creative in developing legal challenges to restrictions on abortion. She acknowledged that California is likely to fight for legal abortion and noted that Connecticut, which has vocally pro-abortion representatives in its state legislature, recently passed a law that will make it hard, if not impossible, to subpoena records when suing a health provider.

“A doctor could block you from getting your own medical records,” she noted.

Planned Parenthood and the National Abortion Rights League didn’t respond by press time to requests for comment from The Epoch Times.