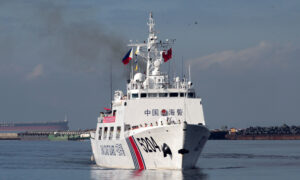 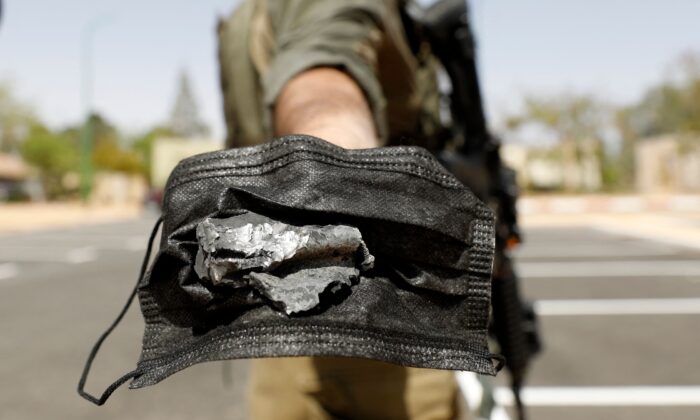 An Israeli soldier holds a piece of debris with a mask after a missile launched from Syria landed in Ashalim settlement, near the Dimona nuclear power plant in Israel's southern Negev desert, on April 22, 2021. (Ahmad Gharabli/AFP via Getty Images)
Viewpoints

What Happened to the Syrian Missile That Crossed Over Israel?

Evidence suggests it was tracked and shot down

A Syrian SA-5 (S-200) air defense missile with a large 500 lb warhead blew up over the Israeli Negev, about 19 miles from Israel’s Dimona nuclear reactor site. The Negev is in the very south of Israel, about 115 miles from the Syrian Golan area where it was fired.

The press in Israel and elsewhere are characterizing this as an Israel defense failure. But the facts do not support that conclusion. In fact, it appears the SA-5 missile was shot down, perhaps not as elegantly as some would like, but nonetheless it was destroyed. The clamoring in the press is misplaced.

The SA-5 was initially developed in the late 1960’s and subsequently enhanced and improved over the years. Its missiles are ground to air types and are not designed to hit ground targets. In fact these missiles cannot be aimed at ground targets.

According to news reports, the errant missile was one of a number that were fired at Israeli jets early on Thursday morning over Syria. In response to the SA-5 missile that traversed and exploded over Israeli airspace, the Israeli air force knocked out some Syrian SA-5 launch sites, wounded at least four Syrian army personnel and killed one, in the air strike, who was the site’s captain in charge of the missile battery.

In Israel there are a number of stories saying that Israeli’s air defenses did not respond to the SA-5 incursion. Defense Minister Benny Ganz, for example, said that normally Israel expects a different outcome (from its air defenses). He did not say that no missiles were fired nor did he say the SA-5 missile wasn’t hit.

It remains to be seen what analysts in Israel come up with on the missile’s flight path and destruction. There are many possibilities. Among them are: (1) the Israeli air defenses failed to detect the missile; (2) the Israeli air defenses were late in responding; (3) there was some confusion of command and control; (4) the intercepting missile missed its target; (5) the intercepting missile damaged but did not immediately kill its target; (6) some algorithms projected the SA-5 missile would not do damage and therefore did not attempt an intercept.

In regard to detection, it is certain that Israel’s air defenses detected the SA-5. Warning sirens went off in the Negev, including Dimona.

In fact Israel air defense charted the SA-5 flight path which is why warning sirens went off.

It is true that some Israel air defense systems such as Iron Dome only fire at threats that are likely to hit populated areas or sensitive locations. Whether that applies to Arrow 2 or to the broader command and control system is not public knowledge. But since Israeli air defenses are increasingly integrated, the order to fire at a threat would be evaluated in the same way Iron Dome works.

But the argument is irrelevant because Israel did not only fire at the SA-5, but hit it.

The incoming SA-5 missile blew up in mid air scattering fragments over a wide area after crossing much of Israel’s territory. Something made it explode. What?

In the past Israel had used Arrow 2 to knock out a SA-5 that entered Israeli territory.

The SA-5 uses different interceptor missiles, but all of them are quite large (around 7,000 kg on launch), have four solid fuel booster rockets that fall off, and can hit aircraft at high altitude. In 2001 a Ukrainian SA-5 interceptor, used as part of a military exercise, went off course and shot down a Tu-154 commercial airliner belonging to Siberian Airlines, Flight 1812 from Tel Aviv to Novosibirsk, killing 78. Flight 1812 was at 35,000 feet (10,668 meters) altitude when it was brought down.

Arrow 2 is supposed to be capable against missiles and aircraft. It uses a high explosive fragmentation warhead weighing approximately 150 kg. Such warheads use proximity fuses, meaning that they explode in an area around the threat rather than directly hitting the threat. The kinetic energy of the fragments, often made of special steel with the addition of pyrophoric fragment materials to increase lethality, can destroy an airframe (whether a rocket or aircraft).

By way of comparison, the Arrow 3 uses a kinetic kill warhead that directly hits the target. If in fact an Arrow 2 interceptor was launched at the SA-5 threat, it may have exploded too far away to immediately destroy the SA-5 interceptor, but could have damaged it, leading to it breaking up.

It is also possible that a Patriot battery fired at the SA-5 threat instead of Arrow 2. The Patriot warhead is smaller, around 90 kg. Like Arrow 2 it uses a blast fragmentation warhead.

We have seen all too many examples of Patriot missiles hitting incoming missiles where they did not immediately destroy them. This was true in the early stages of the Patriot program when Scud missiles fired from Iraq were intercepted over Israel, and it is true today for Houthi missiles fired at Saudi Arabia. The missile hits the target but the target does not die right away because the warhead is not powerful enough or close enough to totally destroy the missile.

There is no reason to think that the Syrian SA-5 missile had any special characteristics. These are fairly old systems, although the Russians have upgraded them. Marine General Kenneth McKenzie, head of U.S. Central Command, says that the Syrian launch of the missile reflects Syrian incompetence and that it was not a planned strike.

There may be other explanations, but the most likely scenario is that the rather heavy SA-5 missile was damaged by an Arrow 2 or Patriot missile and exploded in the air, falling to the ground where its warhead detonated.

Israel rarely talks much about its defenses openly, for obvious reasons, so at the end of the day we may have to keep guessing what happened, but if we pay attention we already know quite a lot. Most importantly the press reports saying that the Israeli air defenses failed or were sleeping is simply not true.