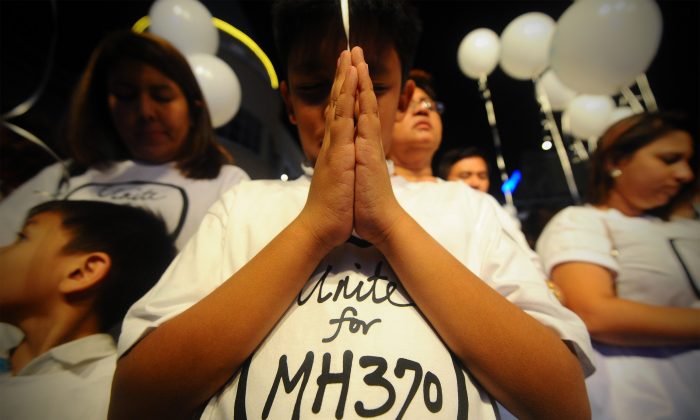 A young Malaysian boy prays, at an event for the missing Malaysia Airline Flight 370, at a shopping mall, in Petaling Jaya, on the outskirts of Kuala Lumpur, Malaysia, March 18, 2014. (AP Photo/Joshua Paul, File)
Asia & Pacific

In a widely expected move, Malaysia Airlines officials declared the disappearance of Flight MH370 as an “accident” and said everyone on board is “dead.”

The messages appear to be mostly routine. The last thing the Flight 370 crew said was “all right, good night” to air traffic control. Before that, the pilots said, “This is MH370, flight altitude 350.”

The Telegraph points out there’s a few things that may be anomalous. One message from the cockpit at 1:07 a.m. said the plane was flying at 35,000 feet, but it was a repeat of a message delivered six minutes earlier. Analysts pointed out to the publication that the second, seemingly odd message took place at the critical moment when the plane’s signalling device sent its last message. In the 30 minutes after that, authorities presume it was deliberately taken offline.

It comes as Malaysia’s civil aviation chief, Azharuddin Abdul Rahman, issued a statement on Thursday that “after 327 days and based on all available data as well as circumstances … survivability in the defined area is highly unlikely.”

“It is therefore with the heaviest heart and deepest sorrow that we officially declare Malaysia Airlines Flight MH370 an accident,” he added.

Authorities said that the underwater search for the plane has not been called off, but Rahman noted that declaring the incident an accident will pave the way for the compensation of families of the victims on board the plane.

In November, Malaysia Airlines said the victims’ next of kin will be compensated once the plane was officially declared a loss. It reiterated its stance on Thursday.

“Following the announcement today, Malaysia Airlines’ representatives will be contacting the appointed next-of-kin to proceed with the compensation process. The airline remains steadfast to ensure that fair and reasonable compensation is paid to the families of all MH370 passengers in accordance with the applicable laws,” the company said in a statement.

And while the search for the plane in a remote stretch of the Indian Ocean is still ongoing, nothing has turned up. The Australian Transport Safety Bureau, the agency leading the hunt, said more than 18,000 square kilometers (6,949 miles) has been searched.

Some family members of the passengers who were on the plane refused to accept that the plane was lost following the Malaysia Airlines declaration.

“There’s nothing new. The Malaysian authorities have been covering up the truth from the get-go, and they have no credibility to speak of. We are not accepting the conclusion,” said Wen Wancheng, the family member of a passenger on board the airliner.

“Because you have no evidence at all. How can you come to such a conclusion?” said Wang Chunjiang, who lost his brother Wang Chunyong. “Chinese New Year is coming up. Why did you choose now to make the announcement?”