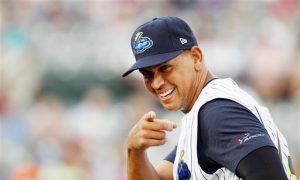 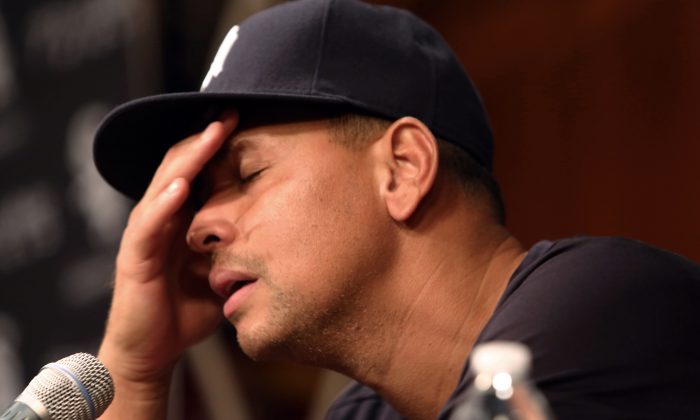 FILE - In this Aug. 5, 2013 file photo, New York Yankees' Alex Rodriguez, with his hand to his head, talks during a news conference before the Yankees played the Chicago White Sox in a baseball game at US Cellular Field in Chicago. The owner of a now-defunct Florida clinic was charged Tuesday, Aug. 5, 2014, with conspiracy to distribute steroids, more than a year after he was accused of providing performance-enhancing drugs to Yankees star Alex Rodriguez and other players. Federal court records show Anthony Bosch is charged with one count of conspiracy to distribute testosterone. (AP Photo/Charles Cherney, File)
Baseball

What Else Could A-Rod Apologize For?

So, A-Rod has apologized to the Yankees for his actions over the past few years. Given his history, I’m guessing that was a pretty long apology.

I can only imagine how it went, especially with his lawyer present. Maybe something like this:

(long pause as Yankees brass look around to see if they’ve been Punk’d.)

Brian Cashman: Sure, sure … for which incident?

According to reports, Alex Rodriguez apologized for taking PEDs and for his hostile nature of defending himself. Sources told ESPNNewYork.com that the Yankees told him he needed to make up for his behavior—specifically suing Major League Baseball as well as the Yankees team doctor.

That’s really only the tip of the iceberg apology for A-Rod. Here’s a few other incidents he could have apologized for:

With Game 6 of 2004 ALCS slipping away (down 4–2 in the eighth), A-Rod comes to the plate with Jeter in scoring position. Needing a big hit, the reigning MVP softly rolls out to pitcher Bronson Arroyo. But when Arroyo goes to tag him, A-Rod slaps at the glove, knocking the ball out and everyone is safe. If that wasn’t enough, when the umpires huddle around and finally call him out, a “stunned” A-Rod runs over to the umpires and appears to be trying to convince them that his violent slap was his normal running motion.

In the ninth inning of a game at Toronto in late May 2007, A-Rod is at first base when Jorge Posada hits a high pop-up to third. Blue Jay third baseman Howie Clark is camping under it, just as A-Rod is running behind him, when suddenly Clark moves out of the way—as if he was called off by another infielder—and the ball drops in for a hit. A furious Clark (as well as shortstop John McDonald, who was right behind him) confronts A-Rod and contends that he was the one who shouted, making him think McDonald was calling him off. A-Rod later says he just yelled “Ha!”

During the 2007 World Series—when Major League Baseball prefers all other baseball news be suspended so as not to take away from the Fall Classic—A-Rod’s power agent, Scott Boras, announces to the baseball world that A-Rod will opt out of his $252 million contract. The Yankees, who had vowed not to re-sign him if he opted out, not only go back on their word and give him a new deal, they go completely overboard and award him the 10-year, $275 million albatross of an agreement that still haunts them to this day.

A-Rod admits PED use in 2009, after a Sports Illustrated report says he tested positive in 2003. A-Rod says he only took it over a three-year period.

Aside from his 2009 playoff exploits, A-Rod has had some real postseason problems with the Yankees. But in 2012 (his last postseason) he was at his absolute worst. The 37-year old struck out 12 times in just 25 official at-bats while recording three hits—good for a .120 batting average. If that wasn’t enough, the New York Post reported that during Game 1 of the ALCS, A-Rod was flirting with a pair of female fans sitting near the Yankees dugout and even went as far as having a ball boy toss them a baseball with a note on it asking them to write their numbers down.