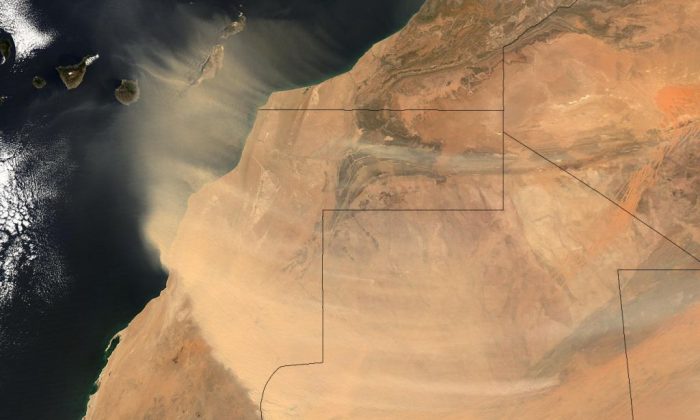 What Dust From the Sahara Does to You and the Planet

At this time of year in Europe, you may have noticed something in the air. Dust-laden winds blowing from the Sahara desert cause “seasonal haze episodes” that can even result in mud rain.

In West Africa, which experiences haze episodes between November and March, the dust-laden trade wind is called the Harmattan and has important implications, not only for soil fertility but also radio communication, visibility at airports and in shipping lanes, and also on livelihoods—and health.

Dry skin and cracked lips are regular symptoms of exposure to the haze. But it presents more serious problems for asthmatics—and can lead to silicosis, a lung disease caused due to a high content of quartz in the dust. In some areas the dust blocks the sunlight enough to make temperatures drop significantly.

And if the wind picks up…

Two regions have been identified as the sources of the Saharan dust: the Bodélé Depression in north-eastern Chad, which is part of the now dried up Lake Megachad—the most intense dust source in the world—and the Tibesti mountain region in northern Chad. Dust particles come from rocks in the Tibesti region and broken down by processes such as weathering, erosion and pulverization.

It has been estimated that 400 million to 700 million tons of dust is transported from the Sahara every year. And the north-easterly Harmattan wind carries this dust as far as Barbados and Miami between November and March. As much as 20 percent of it reaches the Amazon—and satellite data has been used to calculate that some 27.7 million tons of dust are deposited over the Amazon basin, which plays a crucial role in fertilizing the soil.

When the wind direction changes to south-westerly in early spring, the dust is carried across the Mediterranean as far as northern Europe and the UK.

Natural mineral dust affects the climate, as well as fertilizing aquatic and terrestrial ecosystems. Studies have shown that the dust is rich in phosphorus, which is the main source of nutrients for the Amazon. It also contains potassium and calcium. But to understand its full impact we also need to know the level of iron oxide minerals—and iron—within it.

Iron exists in two oxidation states in minerals: ferrous (Fe2+) and ferric (Fe3+). These are irons which have lost two or three electrons from their atoms. Ferrous iron is soluble and can be absorbed by plants whereas ferric iron is insoluble. Their relative abundance has implications for the fertility of the soils upon which the dust settles.

The bulk mineralogical composition of dust from the Bodélé Depression is quartz (around 75 percent). And using a Mössbauer spectrometer, the most powerful instrument for determining both ferric and ferrous irons and their ratios, I found that the Harmattan dust from the Bodélé basin contained three varieties of iron-bearing clay minerals that were all seriously deficient of the more desirable ferrous irons for healthy plant growth and had greater levels of highly-insoluble ferric irons.

The impact of this depends, of course, on the type of soil that the dust lands on. One study showed iron was helpful to maize farmers in northern Nigeria while a 2013 study showed that it was a threat to rice grown in several tropical savanna areas. But ultimately, a low ferrous content can still help fertilize soils because of its alkaline range—large amounts of Saharan dust on soils can improve more acidic soils whose pH is too low for plant growth, whereas more alkaline soils should benefit from the addition of iron.

Depending on where they have come from, dust particles can range from as small as 0.7µm (microns) to 20µm. The ultra-fine nano-sized particles that are better absorbed by plants are blown further, across the Atlantic and particle sizes also decrease across the Mediterranean.

The Harmattan dust is blown over predominantly rural regions in West Africa, but the Saharan dust in Europe blows over regions of heavy industry and can mix with industrial pollutants. A particularly bad episode of pollution in the U.K. in 2014 was explained by other industrial and agricultural factors—not just the dust. And when the arrival of dust coincides with rainfall it can be deposited as mud, as happened in Istanbul, Turkey in 2010.

A report on the health effects of the Saharan dust in southern Europe showed that in Barcelona and Madrid, cardiac mortality during Sahara dust days was statistically significantly higher compared with dust-free days. Similar trends were observed in Greece and Italy. The report called for further investigation into coarse particles and the mechanism by which Saharan dust increased mortality.

Saharan dust that settles on the Atlantic Ocean and the Mediterranean is also likely to be a significant contributor of iron to marine algae. When this algae sinks to the ocean floor, or is eaten by planktonic organisms, whose carbonate shells also sink, carbon dioxide is sequestered into sea floor sediments. The distribution of iron in the oceans is likely to be a way of trapping excess atmospheric CO2. On the one hand, global warming could increase winds and therefore dust production, but then more dust could enter the ocean, potentially providing a natural mitigator to those effects.

Jacob Adetunji is a visiting research fellow in mineral chemistry at the University of Derby in the U.K. This article was originally published on The Conversation.