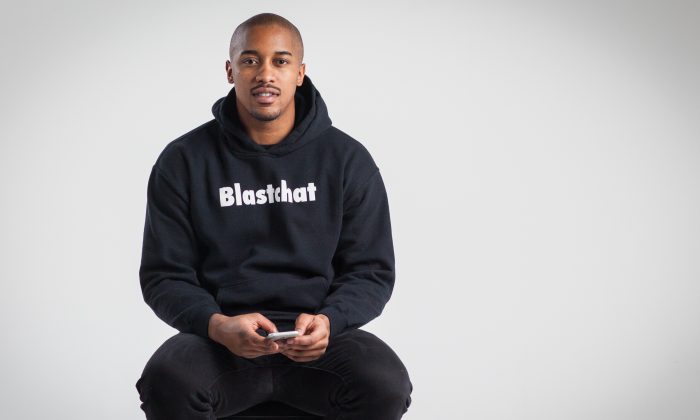 What Does It Take to Become a Black Mark Zuckerberg?

NEW YORK—Jhamar Youngblood didn’t want to be a nerd. He was a basketball player, a rapper. But he really, really liked math and computers.

Such interests were problematic for an African-American child who wanted to be cool in Elizabeth, New Jersey, where drug deals and shootouts were the norm. To fit in with his peers, Youngblood consciously decided to suppress his interest in technology.

“I had to battle with getting picked on for being into technology,” he said. “It wasn’t something I was comfortable with exploring.”

It wasn’t until Youngblood (a Cherokee surname) left his hometown and went to college that he began to teach himself how to code. As he watched programming videos on Youtube, a spark lit in his mind.

By age 27, Youngblood was making inroads in the tech industry. He developed and launched an app on iTunes by himself last August and has a product manager interview lined up with Google.

Although he has a master’s in globalization studies from Dartmouth College, he felt he received his most valuable education from programming videos on Youtube. As the number of free resources that teach computer science grows, Youngblood often wonders why there aren’t more black people working in the tech industry. At Google, African-Americans make up 1 percent of its tech workforce; at Yahoo, 1 percent; at Twitter, 2 percent.

As he looks back on his childhood, he said one aspect of the problem is that young blacks tend to think working in tech is a betrayal of identity. Youngblood has made it his mission to show them that computer science and “blackness” are not mutually exclusive.

African-Americans consistently experience the highest level of poverty in the United States. Although poverty declined for other races as the nation’s economy improved, the statistics for blacks in poverty remained stagnant in recent years, according to a 2015 Pew Research Center report.

It bothers Youngblood that technologically inclined black youths are not encouraged to pursue this interest when nearly every industry—from game development, to news organizations, to finance firms—needs programmers. The Bureau of Labor Statistics estimates that computer and information technology occupations will grow 12 percent by 2024.

Youngblood has made it his mission to remove mental barriers that block black children from identifying with computer science.

“I used to think it was impossible for me to get into tech. There was no one who looked like me in it. Even in movies, it’s always a white nerd. Black people don’t do that. That mind frame haunted me for a while,” he said. “Why am I into this? I’m not white? Am I trying to be white?”

The problem is cyclical. Youngblood believes there are no black equivalents of Mark Zuckerberg, Bill Gates, or Steve Jobs because, in order to become a revolutionary tech leader, one needs to begin investing in an interest in science, math, or programming at a young age.

“I’m trying to show kids that what people say about you doesn’t matter. What matters is that you’re building products that people will use,” he said. “The feeling is unlike anything else. That’s cooler than any basketball you will ever shoot in your life.”

“If they understand that early you’ll have the next black Bill Gates,” he said. “Bill Gates started extremely early. That’s key.”

Last August, Youngblood launched Blastchat, a free messaging app that allows users to send one mass message to a group and receive individual responses. The app allows users to share content with a large group at once and saves recipients the annoyance of receiving incessant notifications from group messages.

“It’s like bcc in email but for mobile messaging,” Youngblood said.

Youngblood told his friends about the app.  Several younger boys reached out to him, wanting to learn how they can learn to make one too.

Through word of mouth, teachers began asking him to mentor students in after school programs; mothers asked him to befriend their children.

In the last year, Youngblood began mentoring around 50 young black people across the nation.

Although Youngblood is busy refining features on his app and seeding capital for his startup, he makes time to meet with a group of youths once or twice a week.

He follows up with them regularly to give career advice and guidance on projects they want to build. He touches base with youths from other states through phone calls or Skype.

The hardest part, he said, is teaching them how to deal with bullying.

Youngblood tells them it is OK to like sports, go to parties, and code too. These hobbies are not incongruous.

And his method is working.

Channon Minott is from the same neighborhood as Youngblood. He’s six years younger than Youngblood and has always looked up to him.

Minott, 16 at the time, began experimenting with basic code. A switch flipped in his mind.

“I felt passionate about it. I liked the challenge,” Minott said. “I just knew that was what I wanted to get into.”

Youngblood was there to answer questions and show Minott how to find answers when he got stuck.

Today, Minott is a junior majoring in information technology at New Jersey Institute of Technology. But he said he might not have started dabbling in computer science if Youngblood hadn’t pushed him in that direction.

“Jhamar was one of the first people I met that was into computers. When I met him he introduced me to a lot of things,” Minott said. “Growing up in Elizabeth, [New Jersey] there’s not a whole lot of opportunity. Maybe I would have felt discouraged without him.”

Recently, when a stranger reached out to Youngblood and asked him to mentor two fourth-graders, Youngblood readily agreed.

“I teach them they can still be cool but also into tech,” Youngblood said. “Most important, their ideas mean something. They can be the next Mark Zuckerberg.”