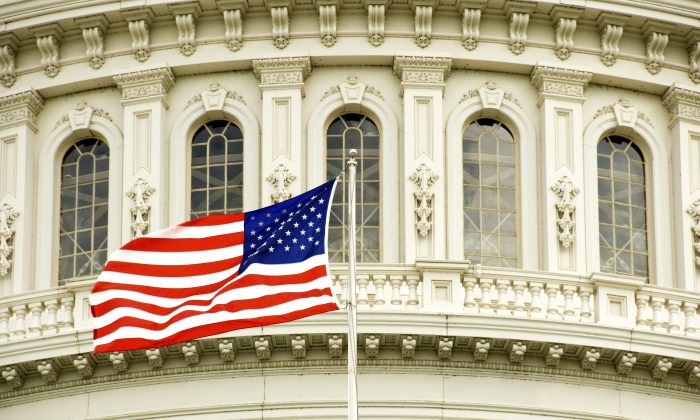 The U.S. flag in front of the Capitol building in Washington, D.C. (GBlakeley/iStock)
Opinion

With a presidential election year fast approaching, we’re in for a lot of public talk about the state of American democracy. Much of that discussion will be insightful and thought-provoking, but there’s a good chance you’ll also find a lot of it vague and hard to pin down.

There’s a reason for this. Even our political leaders, the people who are most familiar with the system’s workings, have a hard time describing it.

In fact, they even have a hard time labeling it. Ours is not actually a pure democracy: it’s more accurate to say that we live in a “representative democracy”—that is, the people don’t themselves make decisions, but delegate that authority to their elected representatives. In this sense, we really live in a republic, a word you don’t often hear from the podium.

Perhaps the best way to start thinking about what American representative democracy really means is to recall the Pledge of Allegiance, which is an oath to the Republic that our flag symbolizes, and in particular to an ideal: that our nation will strive for liberty and justice for all. Plenty of well-meaning people, in the heat of the political moment, seize on one or the other of those twin poles to support their agenda—they insist upon liberty or they demand justice. The Pledge, however, makes it clear that these core principles are inseparable.

Still, they are ideals. They’re not sufficient to define a representative democracy.

Indeed, no single feature does. One of our core tenets holds that the people are sovereign—that we give our consent to be governed through regular participation in the elections that decide who will represent us. Yet elections in and of themselves don’t define our republic, either; there are plenty of countries around the world whose elections are used to distort democracy.

So the rule of law is also key, and along with it the notion that everyone ought to be subject to equal justice under the law. The separation of powers among the different branches of government creates a balance designed to protect the people from overweening power. The rights guaranteed by our Constitution ensure that the rights of minorities of all kinds are safe.

The big challenge in all this is to set up the structures and practices that protect and defend these beliefs. The courts, legislative bodies and executive branches at the federal, state, and local level are an example of this, along with a system of checks and balances that promotes accountability and transparency. So are the freedoms we often take for granted: under our Constitution, we do not put to a vote whether to continue protecting freedom of religion or the right to express unpopular sentiments or publish news that challenges those in power.

While representative democracy rests on a core set of principles, it remains a constantly evolving concept. At the beginning, ours was limited: our Founders began with an inspiring set of beliefs about how a nation ought to govern itself, but they also ignored women and chose to set aside the question of slavery. This was a democracy of white males of a certain age who owned property. Representative democracy by its nature is always a work in progress; we never really get the balance between liberty and justice exactly right.

This is worth remembering at the moment, when the problems we confront seem so overwhelming and our institutions are under so much strain. The problems they have to resolve—the outsized role of money in politics, excessive partisanship, the sheer complexity of the policy challenges we face—are daunting, but that doesn’t mean representative government itself should be called into question.

In fact, it is our great strength. It protects against arbitrary authority, strives for justice, hears our varied and conflicting opinions before it acts, and moderates tensions among competing interests. It works in a measured fashion that tends—over time—to encourage policymakers to find consensus. It is the form of government that, when allowed to work properly, is most likely to lead to wise policy, firmly rooted in the consent of the ordinary people on whose shoulders it rests.