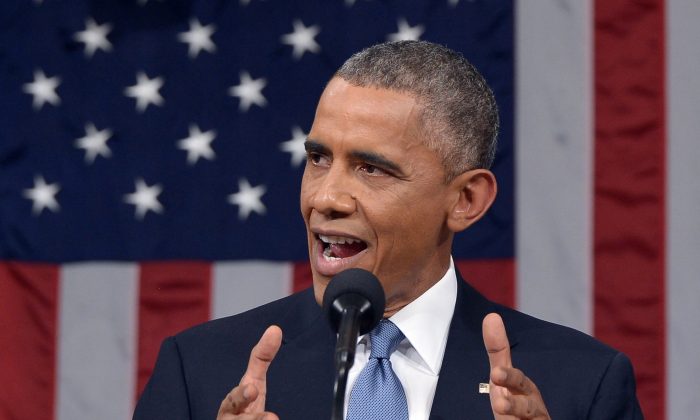 President Barack Obama delivers his State of the Union address to a joint session of Congress on Capitol Hill on Tuesday, Jan. 20, 2015, in Washington. (AP Photo/Mandel Ngan, Pool)
Politics

What Do Obama and Congress Still Agree On?

President Barack Obama made his point repeatedly in Tuesday’s State of the Union address that he will reach out to the Republican-controlled Congress, but expects collaboration, or at least a civil discourse, in return.

Yet in the same breath he promised to veto any attempt by Congress to touch his health reform or executive orders on immigration. He even proposed raising taxes on the rich, further alienating the lawmakers.

Republicans in the audience gave him a cold shoulder, hardly reacting to even universally positive talking points, like improving the economy.

Still, there were some, mostly fragile, isles of commonality.

An example of a measure supported on both sides of the aisle is cyber security. Both the president and Congress say it needs to be improved. Republicans should have no problem with the President’s proposal of improving communication between government intelligence agencies and corporations, helping them to deal with the dangers.

Another may be the “Auto IRA” retirement savings plans that Obama proposes in his budget. “There’s a lot of room for consensus,” said Romina Boccia, Grover M. Hermann Fellow at the Institute for Economic Freedom and Opportunity at the conservative Heritage Foundation.

“Making it easier for more Americans to save for their retirement” appeals to Republicans.

Some other areas look consensual, but may have a rub to them.

Both Democrats and Republicans agree that a 35 percent corporate tax is excessive, while companies able to exploit loopholes in the law “optimize” the tax down to about 13 percent.

The solution would be to lower the rate and nix the loopholes. Republicans can boast a lower tax rate, Democrats can claim leveling the playfield.

But that’s not how Obama played the card. His idea included raising taxes for the rich and corporations to fund new initiatives like tax breaks for families and free community college. But raising taxes is an obvious no-go for Republicans.

“That leaves Republicans feeling that there’s no common ground being sought here,” said David Boaz, executive vice president of the Cato Institute, a libertarian think-tank. “It almost suggested that he would rather have a political issue that an actual policy reform.”

Another such topic is infrastructure. Obama called for major investment, and Republicans tend to agree.

“The big issue there is how to pay for the infrastructure bill,” said Heritage’s Boccia. Obama suggested he would seek more money through the corporate tax reform. Republicans may want to push the funding out of the federal purview and let the states raise their taxes, seek public-private partnerships, and establish toll roads.

Then again, Obama said he would want the agreements to be “fair.” That’s a language that would suggest imposing additional rules, like worker protections. In the Republican dictionary that reads “not free anymore.”

“The President gave such a limp defense of trade agreements last night that genuine free traders will be discouraged about the prospects for any agreement that he negotiates,” said Boaz.