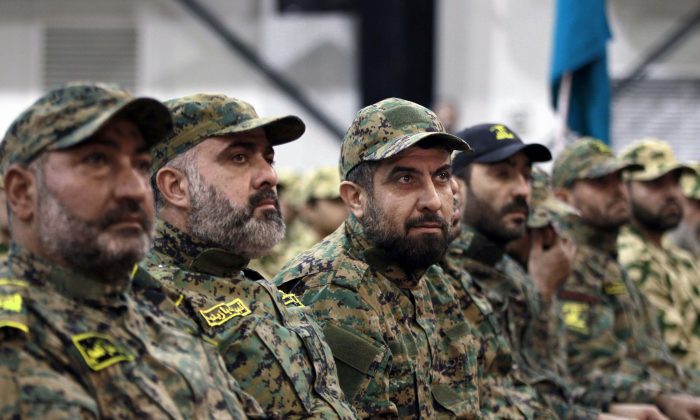 Hezbollah terrorists listen to Hezbollah leader Sheik Hassan Nasrallah, as he speaks via a video link during a rally to mark the Hezbollah martyr day, in the southern suburb of Beirut, Lebanon, on Nov. 11, 2015. (AP Photo/Bilal Hussein)
Viewpoints

What Did Obama Know About Hezbollah’s Bomb Plot in London?

President Donald Trump’s long-anticipated visit to Europe during the 75th anniversary of the D-Day invasion has now come and gone. He arrived in the UK on June 3 and departed for Ireland on June 5, before hopping across the Channel for the official D-Day ceremonies in France on June 6.

What I would like to draw attention to is what occurred immediately prior to Trump’s arrival in the UK, and what subsequently happened immediately after his departure.

Just prior to Trump’s visit, UK Prime Minister Theresa May announced that she would be resigning. She made the announcement on May 24 and stated that June 7 would be her last day as the leader of the conservative party.

Following Trump’s departure from Europe, it was suddenly revealed in the UK press that a massive bomb plot in London by the Iran-linked terror group, Hezbollah, had been foiled several years ago, and that authorities had deliberately hidden that plot from the public.

It was in the fall of 2015 that UK intelligence agency MI5 discovered a cell of Hezbollah terrorists operating in northwest London. According to reporting by The Telegraph, the group had amassed a stockpile of more than three metric tons of ammonium nitrate, a fertilizer compound that is a popular key component in homemade bombs.

The Oklahoma City bombing in 1995 by domestic terrorist Timothy McVeigh, which killed 168 people and caused extensive damage to the Alfred P. Murrah Federal Building, involved two tons of ammonium nitrate. The Hezbollah terror cell had compiled three metric tons at the time it was caught. So let’s make this crystal clear: This wasn’t going to be any kind of small-scale attack on London.

Hezbollah isn’t an independent terror organization. It’s a fully owned and organized tool of the Iranian regime, which means Iran had a direct hand in fomenting a plot to set off a massive bomb in London.

David Reaboi, an analyst at the Security Studies Group, was one of the first people to grasp the import of the revelation of the Hezbollah London bomb plot.

Soon after The Telegraph broke the story, Reaboi wrote on Twitter:  “This is actually a **huge** intel scandal. I’m assuming the US IC and Obama knew that, while they were pushing the Iran Deal, THERE WAS AN IRANIAN BOMB STOCKPILE IN LONDON. Politicians were NOT informed, lest they’d oppose the Deal.”

This is actually a **huge** intel scandal. I’m assuming the US IC and Obama knew that, while they were pushing the Iran Deal, THERE WAS AN IRANIAN BOMB STOCKPILE IN LONDON. Politicians were NOT informed, lest they’d oppose the Deal. @dbongino https://t.co/ENaeYGqTHn

I suspect this is a big reason why May is really resigning. She very well could have agreed to continue the David Cameron policy of hiding this planned massive terrorist attack from UK lawmakers and the public, in order to save the Iran nuclear deal.

“The discovery was so serious that David Cameron and Theresa May, then the prime minister and home secretary, were personally briefed on what had been found,” The Telegraph wrote in its June 10 article.

Like Reaboi, I have a hard time believing that both the Cameron and May governments hid this Hezbollah bomb plot from the Obama administration. However, since they were hiding the information from their own lawmakers, it’s a question that needs to be asked: Was then-President Barack Obama ever informed that the regime in Tehran, with which he was about to sign a nuclear deal, had just been caught engaging in blatant terrorist activity in London? And if Obama was informed, what action—if any—did he take?

As Epoch Times contributor Jeff Carlson discusses in a recent article, Obama didn’t officially enact the Iran deal until Jan. 21, 2016, when he signed Executive Order 13716 into effect. That was months after the Hezbollah terror cell had been caught.

It’s exceedingly strange for the United States and governments in Europe to still be assiduously seeking a nuclear deal with a regime that is not only fomenting terrorism and instability all over the Middle East, but also planning large-scale terror attacks in Western Europe.

The Iran deal itself was a hard sell, to begin with. Obama never even put it in front of Congress because he knew there was zero chance of it passing. But coupled with the fact that Western intelligence and law enforcement agencies were catching Iran-backed terrorists hatching a bomb plot right in the heart of London, it’s outright bizarre.

How many government leaders and which countries were involved in covering up Iran’s involvement in this UK terror plot so they could keep the Iran deal going?

In case you’ve been waiting for the next big international scandal to drop, you’re looking at it right now, folks. I don’t think it was the bungling of Brexit alone that forced May out; it was also the knowledge that this coverup was about to be exposed, as well as the involvement of UK intelligence officials in the ongoing and ever-expanding “Spygate” scandal.

This stinks to high heaven and if we had a real media, reporters would be asking serious questions right now.