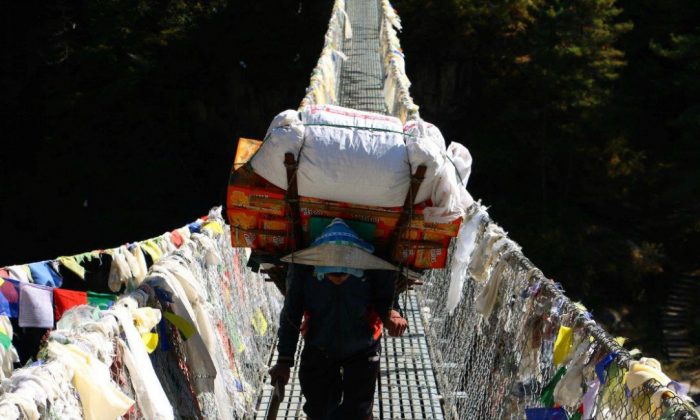 In Nepal’s Khumbu region, all trade is conducted on the backs of porters and pack animals. (Nolan Peterson/The Daily Signal)
Asia & Pacific

The Nangpa La bridges the Himalayas between Nepal and Tibet. Chinese soldiers on this mountain pass shoot at anyone trying to sneak across, traders who attempted crossings after 2009 say.

Using these cameras and observation posts, the traders say, Chinese units alert police in Nepal to any refugees or traders from Tibet who are able to slip over the pass. The Nepali police then make arrests at natural bottlenecks in the mountain trails, such as here in the village of Namche Bazar in Nepal’s Khumbu region.

China bribes the Nepali police to catch refugees and return them to Chinese authorities, officials with the Tibetan government-in-exile in Dharamshala, India, told me in October. Chinese authorities also bribe Tibetans living near the pass to be informants, relaying information about possible refugees to Chinese troops.

It’s almost impossible to make it into Nepal. China is spending a lot of money to guard this border. Now there’s no way to get out.
— Karma Rinchen, additional secretary, Tibetan gov't-in-exile's Department of Security

“It’s almost impossible to make it into Nepal,” said Karma Rinchen, additional secretary for the Tibetan government-in-exile’s Department of Security. “China is spending a lot of money to guard this border. Now there’s no way to get out.”

Even if refugees are able to make it out of the Himalayas and as far as Kathmandu, they aren’t safe until they pass the doorway threshold of the United Nations’ refugee reception center there.

“If you make it there, you’re free,” Rinchen said.

Some obstinate traders, however, attempted to keep crossing the pass for the first year or two of the crackdown. But the tight monitoring network and the harsh prison sentences doled out to violators were effective, completely stemming the flow of refugees and traders.

Since about 2008, China also has adopted a policy of collective punishment for the families and villages of refugees. This, in addition to a pervasive spy network, has made many Tibetans simply too afraid to attempt escape because of the consequences for their families or neighbors.

Tashi said: “People are scared now. China has blocked all the exit points and started punishing the families or the whole towns of someone who has escaped.”

People are scared now. China has blocked all the exit points and started punishing the families or the whole towns of someone who has escaped.
— Tashi, Tibetan refugee

The Chinese Ministry of Foreign Affairs did not respond to a request for comment for this article on why the Nangpa La was closed. However, the Chinese crackdown on the ancient trade route paralleled a wave of protests across Tibet in the run-up to the 2008 Beijing Olympics.

Retracing a High, Desperate Flight at Below Zero Near Mount Everest

A Romanian mountaineer climbing on nearby Cho Oyu captured Namtso’s murder on video. When CNN and other major news outlets aired the tape, it sparked a media firestorm criticizing China’s draconian treatment of refugees.

“I think there’s a politics involved, because some Tibetan people come do business here and then some go to India to see the Dalai Lama,” Anu Sherpa said, speaking from his mountaineering shop in Namche Bazar. “When they go back among the Tibetan people, they make some problems for China.”

The Khumbu region, like most of Nepal, has had a bad year. The mountain region’s economy is heavily dependent upon tourism. About 25,000 trekkers and mountaineers typically visit the Khumbu each year (compared with about 4,000 residents of the area), spending millions of dollars.

But after the two earthquakes this year and an ongoing Indian trade blockade that sparked a nationwide fuel, food, and medicine shortage, the yearly flood of tourists has trickled to a snowmelt.

Guesthouses and lodges throughout the Khumbu reported about one-third of the usual number of tourists for November, the height of the tourist season. Anecdotally, the trekking trails were noticeably empty compared to other years. Most guesthouses and lodges were quiet, with a fraction of their typical occupancy.

“We have a lot of guides and porters, and they used to buy a lot of cheap clothing from Tibet. And they also bought food supplies from Tibet. That was very essential, very important for people out here who have not benefited as much from tourism.”

The Sherpa people have thrived in one of the harshest environments on Earth for centuries. Consequently, most Sherpa families have more than enough provisions stocked to last the winter, when some land routes are closed by snow. Any concerns about the paucity of gas for cooking and heating are casually shrugged off. Dried yak dung and wood are ubiquitous alternatives.

“The Sherpas, like any mountain people, are used to adversities,” Gariano said. “The climate is harsh; the environment is harsh. You’re at the limit of vegetation here. Life is difficult.”

The effects of the earthquakes and India’s blockade, however, exacerbated an ongoing economic challenge that the Nangpa La’s closing first created. This sparked a grassroots campaign to pressure authorities in Kathmandu to push China to reopen the trade route.

“We have a fuel crisis here and food shortages here, so allowing the movement of people in and out of China would be good for Nepal and for this region,” said Ang Rita Sherpa, who is leading the effort to lobby Beijing to reopen the pass. “We definitely need better ties with China. We need it for a better economy.”

This push to reopen the Nangpa La reflects a nationwide pivot in Nepal to develop closer ties with Beijing as an alternative to New Delhi.

Accounting for 60 percent of Nepali trade, India remains Nepal’s No. 1 trading partner. But last year China took over as Nepal’s top foreign investor. Many Nepalis harbor strong anti-Indian sentiment because of the trade blockade, which has ground Nepal’s tepidly recovering economy to a halt.

“It’s not just the Sherpas, the whole country is looking for an alternative, rather than just depending on one other country,” said Pemba Sherpa, manager of Khumbu Lodge in Namche Bazar. “The fuel crisis will hurt the economy and push the whole country back 10 years.”

He added: “We hope they open up the Nangpa La; it would be very beneficial for the people here.”

While in Thame, I closed my interview with Gariano by asking: “So, why should people care about Nepal? And why should they care about the Khumbu?”

Truthfully, I was hoping his answer would help me out.

With the Nov. 13 terrorist attacks in Paris and subsequent lockdown in Brussels, the death spiral of the Syrian war, the refugee crisis in Europe, and the perpetually hot (and largely ignored) conflict in Ukraine, I have had to honestly consider why a reader should spend a few precious minutes of his or her time to learn about the Nangpa La.

I think Gariano was a bit taken aback by the question.

As the Himalayan lodge’s roof timbers moaned in the night wind and our eyes watered from the acrid smoke of burning yak dung in the furnace heating the room, he explained why he cared about Nepal. He expounded upon the goodness of the people and the admirable traits of their Buddhist religion and culture:

“When I first arrived in Nepal, I came for climbing reasons. I was the classic tourist in expeditions, wrapped in a bubble, so to speak. But I realized right from the beginning, coming in the Khumbu and seeing all the spirituality around me, there was something more than just being a tourist. These are good people, and they deserve our help.”