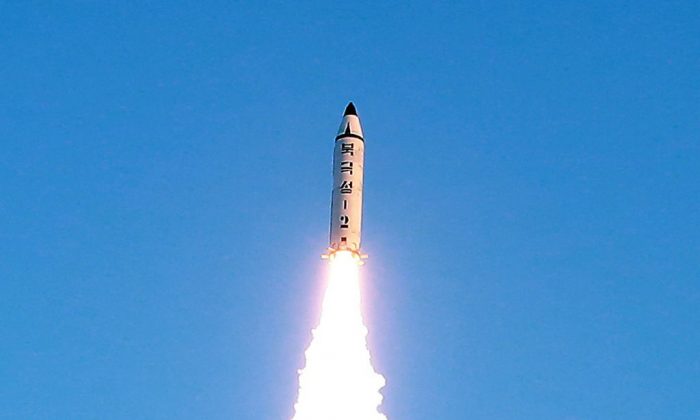 What Could a North Korean Electromagnetic Pulse Attack Do to the United States?

North Korea has started to threaten the United States not just with a nuclear strike, but with a potentially devastating electromagnetic pulse (EMP) attack.

In its sixth nuclear test on Sept. 10, North Korea claimed it detonated a hydrogen bomb. This H-bomb, according to a statement issued by the regime, “is a multi-functional thermonuclear nuke with great destructive power which can be detonated even at high altitudes for super-powerful EMP (electromagnetic pulse) attack according to strategic goals,” reported AP.

What makes an EMP attack so dangerous is that it can be extremely deadly, but in a different way from a direct strike. An EMP attack is when a nuclear explosion occurs above the atmosphere creating a sudden powerful electromagnetic pulse that can destroy or disrupt electronics and power transmission.

“The result would be a months-long loss of the electrical grid, transportation, computers and communication systems, causing a rapid breakdown of our transportation, food, water and healthcare delivery systems,” according to an article by electrical engineer John Moore in PJ Media. Moore predicts this would result in tens of millions of deaths in the United States during the long months it would take to restore systems.

William Graham, Chair of the Commission to Assess the Threat to the United States from EMP Attack, wrote in 38 North, a journal of the U.S.-Korea Institute at Johns Hopkins, that North Korea missiles do not have to be very precise in order to launch a devastating EMP attack.

“An EMP attack does not require an accurate guidance system because the area of effect, having a radius of hundreds or thousands of kilometers, is so large. No re-entry vehicle is needed because the warhead is detonated at high-altitude, above the atmosphere. Missile reliability matters little because only one missile has to work to make an EMP attack.”

Graham says North Korea could even launch a short-range missile or balloon from a freighter or submarine to make a slightly smaller attack. “Even a balloon-lofted warhead detonated at 30 kilometers [18.6 miles] altitude could blackout the Eastern Grid that supports most of the population and generates 75 percent of U.S. electricity,” he wrote.

The last time EMP attacks were taken very seriously was in the early 1960s when the Soviet Union and the United States both tested the effects of such attacks.

Both Graham and Moore warn that the United States is highly vulnerable to such an attack. The word “catastrophic” comes up frequently.

“With few exceptions, the U.S. national electric grid is unhardened and untested against nuclear EMP attack. In the event of a nuclear EMP attack on the United States, a widespread protracted blackout is inevitable,” wrote Graham. He wrote that because of the complex interdependencies of the country’s military and civilian infrastructure systems, “EMP upset and damage of a very small fraction of the total system can cause total system failure.”

Graham ends his article, penned last June, with the same warning the EMP Commission issued in 2004, “the damage level could be sufficient to be catastrophic to the Nation, and our current vulnerability invites attack.”